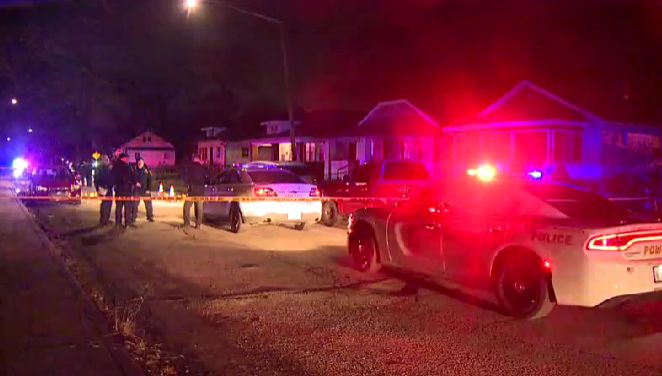 INDIANAPOLIS — An Indianapolis woman was injured overnight Wednesday after shots were fired into a home on the near northwest side.

The victim says she was lying in bed next to her 5-month-old son when bullets tore through the door frame and walls of her home.

The victim tried to run for cover as the outside of the home was hit by more than a dozen bullets.

Woman injured after shots fired at home on near northwest side

“The first thing I did was grab my baby and run because all the gunshots were right where I sleep,” said the victim, who asked not to be identified.

That victim recalls falling down after being shot in the back and arm. She was rushed to the hospital and later released. Her baby survived without being hit after at least five bullets ripped holes in the front door.

“Honestly, I blacked out. I just thought about my baby. I didn’t know what to do. I was confused. It happened so quickly,” the woman said.

Court docs: Ohio fugitive who led Indiana police on chase didn’t plan to stop until he ‘got to his grandmother’s house in Ohio’

IMPD received the shots fired call around 12:30 am at a home on West 31st Street between N. Harding and Elmira streets.

Detectives didn’t have any suspect information to release, but the victim believes whoever pulled the trigger was trying to shoot a roommate who had recently been asked to move out of the home.

The woman now plans to find a new place to live.

Police arrest suspect after woman injured in east side shooting

While it’s still very early in 2023, the case reflects a violent start to 2023. So far, there have been more non-fatal shooting victims and incidents compared to the same time last year.

“Sometimes the innocents get hit and that’s not fair,” said the victim.

While the woman knows she and her baby were not the intended targets, she still hopes the police can find the person responsible for the reckless violence.

“I hope the person that did this gets held accountable because it’s not fair. My 5-month-old baby was with me. I’m just glad my baby is OK,” she said.

Because no arrests have been made, anyone with information on the shooting at this home is still asked to contact either IMPD or Crime Stoppers at 317-262-TIPS (8477).