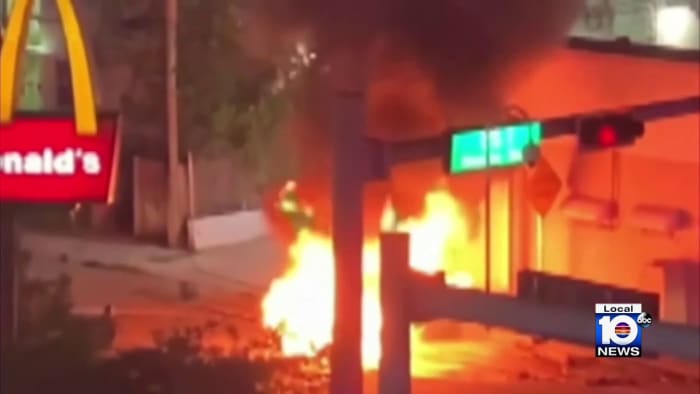 MIAMI – The woman accused of speeding through a red light, which resulted in another dead driver was arrested hours after the crash while in the hospital recovering from her injuries. Shamonni Anya Alexandre-Little is charged with vehicular homicide.

Shereka Oriscar, 22, died at the scene after her car burst into flames from what police said was a “violent impact” caused by Alexandre-Little.

A police records check also showed that Alexandre-Little was driving without a valid license because of 7 suspensions. The latest one was dated April 26, 2022. She is also charged with driving without a license and causing death or serious injury with a vehicle.

North Bay Village police said they had attempted to pull over Alexandre-Little’s vehicle shortly before it crashed in the city of Miami.

Police reports show that Alexandre-Little, 21, of Pompano Beach, was allegedly trying to get away from police after they attempted to pull her over. That’s when she drove her blue 2016 Mercedes C300 through a red light at the intersection of Biscayne Boulevard and Northeast 82nd Street at 4:04 am on Friday, May 6. Oriscar, in a 2019 Toyota Corolla, was stopped at the traffic light at Northeast 82nd St.

According to a witness, when the signal on Biscayne Boulevard changed to green, Oriscar started driving through the intersection.

That’s when Alexandre-Little slammed into the Toyota.

The police report stated that the “impact was so violent, it caused the victim’s vehicle to be pushed approximately 290-feet sideways and then become fully engulfed in flames.” Oriscar was pronounced dead at the scene while Alexandre-Little was taken to Jackson Memorial Hospital’s Ryder Trauma Center with serious injuries, including a broken scapula, right wrist, hip fracture, and a broken nose.

Cellphone video shows the victim’s Toyota Corolla going up in flames after the crash.

Acosta said people in the area rushed over to help.

“I just saw the car being chased on the causeway before it got here, and it came from a side street and almost hit us,” he said. “They stopped pursuit — they were going pretty fast — 80-90 (mph).”

A city spokeswoman, however, said police did not chase the car, but confirmed that officers attempted to pull over the driver.

“At approximately 4 am this morning, a vehicle was observed driving in North Bay Village at a high rate of speed,” Helen Roldan, a spokeswoman for the city of North Bay Village, said in a statement. “Due to the traffic violations observed, the NBVPD attempted to conduct a traffic stop but were unsuccessful in doing so. In accordance with the Village’s policies (including a no-pursuit policy), the NBVPD disengaged at the West end of the 79th Street Causeway and returned to the Village. The vehicle was last seen traveling westbound into the City of Miami’s jurisdiction at a high rate of speed.

According to the report, North Bay Village Police terminated its pursuit of the car at Pelican Harbor.

“The North Bay Village Police Department was notified a short time later that the vehicle became involved in a traffic crash, which resulted in a fatality,” Roldan said.

Alexandre-Little remains at Ryder Trauma and upon her release will be taken to the Turner Guilford Knight Correctional Center.