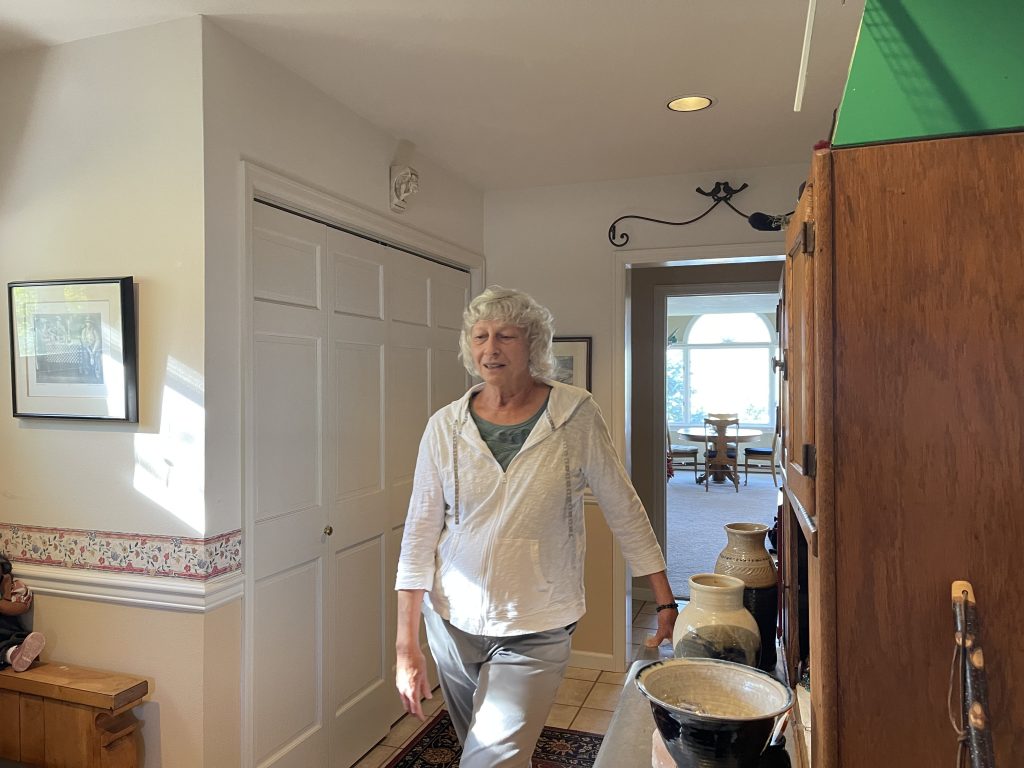 Hanging on the wall of Kristi Blinco’s entryway that hundreds of people have passed through is a cross-stitch framed in gold. Below a little cottage with green stitched trees reads, “Let me live in the house by the side of the road and be a friend to man.”

Blinko thinks at one point it was her mother’s. But now, she knows it serves as a kind of philosophy for the Blinko home.

Blinko and her husband George, along with their two children Justin and Sarah, ran Snowberry Hill Bed & Breakfast out of their home in Summit Cove for over 25 years.

The Blinkos moved to Summit Cove when there was only one stoplight in the entire county, Blinko likes to say.

In addition, the tourism industry has changed. According to past reporting, in 2019, Summit County was ranked by AirBnb as the second most popular destination in Colorado, with 275,000 visitors.

The very first guest stayed at Snowberry Hill Bed & Breakfast on January 1, 1989. The Blinkos used their basement apartment that could host up to four people, and charged around $70 a night, including breakfast.

Each night, Blinko would stay up late preparing for breakfast the next day. In the morning, she would set hot coffee and the bread she had made the night before outside of the guests’ room.

Then, she would set out a full spread of yogurt, granola, fresh fruit, Belgian waffles and more.

“It was really hard at first for me,” Blinko said, “Because I was always kind of shy. I would stay awake at night thinking of questions to ask the guests.”

But as time went on and more vacationers came through, she got used to conversation and would often spend half of the morning eating breakfast and getting to know her guests. Now, Blinko said they have friends all around the world.

Each guest that passed through the Blinko’s home would write in a notebook, detailing their stay. Some entries were from South Africa, and Blinko said they’ve made friends in England, Israel and Australia. Some even brought coins for her son, Justin, from around the world.

One thing almost every entry has in common: everyone loved Blinko’s Belgian waffles.

Breakfast was a part of their routine that Blinko and her guests loved.

“They definitely love the personal touch,” Blinko said. “I think you know, having the owner right there on the premise.” She added that vacationers had lots of questions. “Where do you get skis from? How long does it take to get from the airport? What car should I get, does it need to be a four-wheel drive?”

These were all questions that would typically go to a hotel concierge, Blinco said. At that time, she added, people either stayed in a hotel or a B&B if they visited Summit County.

After the Blinko’s had been open for a while, they joined a B&B association, along with 25 other B&Bs in the county.

Now, there are very few bed and breakfasts in Summit County. Not many exist that are similar to Snowberry Hill where they are run out of someone’s home.

As time went on, Blinko said people became uninterested in breakfast. “All my guests would say, ‘Can we have a little lower price and no breakfast? Because we want to have cereal and get out on the slopes almost,’” she said.

So 25 years in, she stopped doing breakfast.

She kept hosting for another few years until she realized that without breakfast, it felt like she was hosting strangers. There was no connection, no getting-to-know-you. “I eventually fizzled out,” she said. Her last customer was in 2018.

Justin said by the 1990s, when ski resorts introduced the “buddy pass” where people could buy a ski pass as a group, Summit County rapidly expanded in infrastructure and population. And throughout the past four to five years, he added, it’s happened again.

What shocks him, he said, is the cost.

“If you’re just going to find a one bedroom that sleeps four on AirBnB, the nightly rate might be $200, $250,” he said. And that’s for one night, with no breakfast.

Justin attributed this to the commercialization of the ski industry and the way people travel now. Kristi said people used to save up all year to go on one vacation. Now, Justin said, people will easily take a two- or three-day long trip. Where a day pass used to be $40, a Vail day pass is now $354, according to Vail’s pass webpage. Though it allows you seven days at multiple locations, that’s still over double per day than it used to be.

These days, Kristi prefers to stay home and spend time with the friends she made in the 1990s, most of which are still in Summit County, she said. After the COVID-19 pandemic, Kristi said she barely frequents even a grocery store like City Market anymore because of how crowded she feels Summit County has become.

However, she still hosts close friends in the apartment downstairs and vows to keep her Belgian waffle recipe a secret.

“We had to do (Snowberry Hill) because we were just trying to pay the mortgage,” Kristi said. “We were just both young and working our tails off to stay here in the county because we so wanted to be here.”