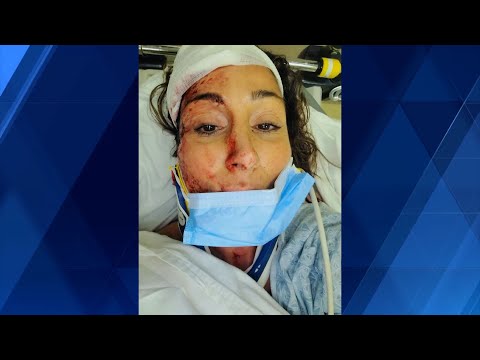 A local spa owner and mother will be out of work for several weeks after she was the victim of a hit-and-run in Winchester just before Christmas.

Kathy Auciello was injured in the crash that happened near the intersection of Main and Vine Streets around 8:45 pm on Thursday, Dec. 22, WCVB reports. According to a Facebook post from her husband Lou, Kathy was walking to her car when she was hit.

“She was crossing main street in the cross walk between the hardware store and Mobile gas station,” he said. “The driver took off heading towards Woburn while she lied in the middle of the street severely injured and unconscious in the rain.”

Kathy was hospitalized with two shoulder fractures and road rash as a result, WCVB reports. Now the owner of Katana Salon and Spa and mom of twin girls is expected to be out of work for at least eight weeks, Boston25 reports.

“Kathy is home resting and recovering,” Lou said in another Facebook post. “Although she suffered several major injuries we are lucky to have her with us and are hopeful for a full recovery.”

Winchester Police are now looking for a white 2016-18 Lincoln MKX crossover SUV with front-end damage. Anyone with information is asked to call detectives at 781-729-1214 and reference case number 382659, WVCB reports.