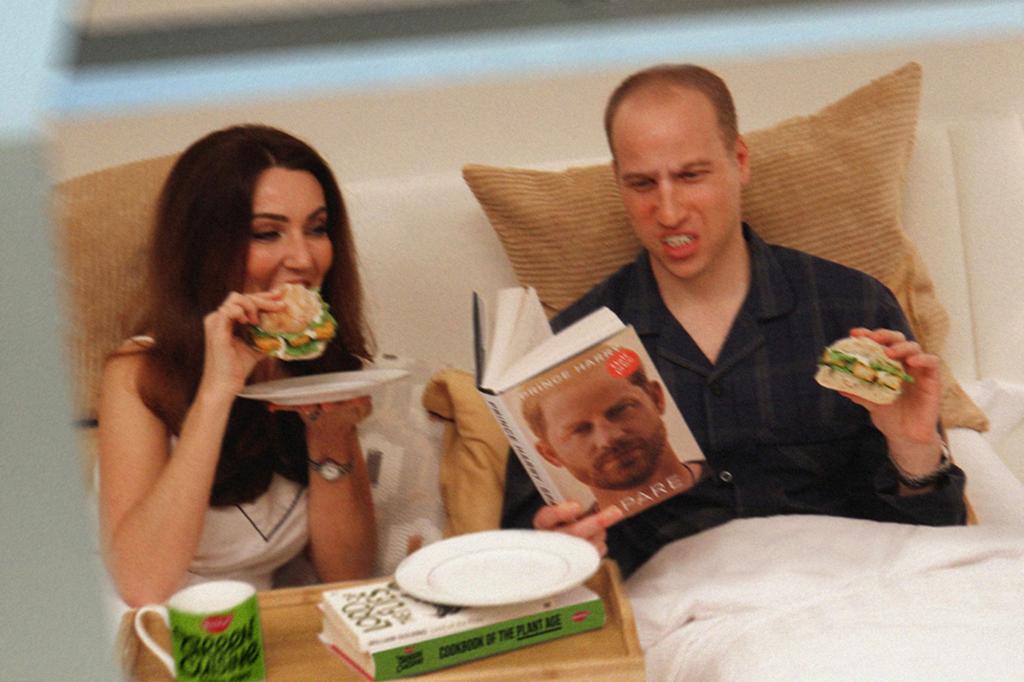 It looks like Prince William and Kate Middleton were spotted reading Prince Harry’s much-hyped memoir while eating burgers in bed — but don’t let your eyes deceive you.

The world has been eager to know if the Prince and Princess of Wales got their hands on Harry’s explosive memoir, “Spare,” and now they can picture it for themselves.

Look-alikes of the royal couple were photographed sitting in their bed and flipping through the book while eating meatless sandwiches.

“My work is all about bringing the imagined private lives of public figures to light through art,” Jackson shared. “It is that peep behind the door we all want to see. With my ‘Veganuary Reimagined’ series it is easy to imagine that King Charles and Queen Camilla would want to add more plant-based options to their diets, particularly given his quest for more environmental consciousness.

“Or that the Prime Minister would gather for a meat-free dinner with his family to embrace Veganuary as he takes a break from running the country. Or how William and Kate would want to enjoy a moment to themselves for a plant-based brunch in bed and a break from busy schedules,” she continued.

The photos of the Will and Kate look-alikes is titled “Green Cuisine Serves an Uno-fish-al Portrait of the Windsors.”

Jackson included Charles and Camilla doppelgangers in the shoot with a photo dubbed “Meat-Free Green Cuisine Burger Fit for a King.”

The photograph of the UK prime minister — named “Number Hen: A Green Cuisine Chicken-Less Dippers Su-snack” — shows him with his family eating a meat-free meal while looking at a copy of “Maths for Dummies,” which is a nod to when he suggested children should be taught math only until they are 18.

Jackson shared that her photo shoots are “full scale, costume dramas” and keep her busy, which has led her to plant-based food choices that offer her a variety of options.

“Our campaign is a fun illustration of how reducing the amount of meat you eat doesn’t have to be so hard,” Victoria Westwood, UK & Ireland marketing lead for Green Cuisine, said.

“What unites all the families in the ‘Veganuary Reimagined’ series is that they are extremely busy, and it’s important for them to be able to make easy swaps to their diet,” she said.

Prince Harry made lots of bombshell revelations in his book — including anecdotes about the family “death cult,” how he lost his virginity, shopping for discount clothes at TK Maxx and getting into physical altercations with William.