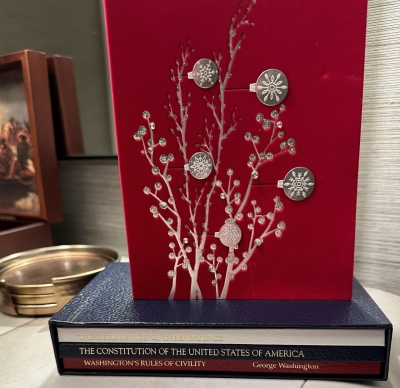 San Francisco: Twitter CEO Elon Musk on Tuesday posted a picture on the micro-blogging platform, which showed a book on the US constitution kept at his bedside table.

It all started when @MuskUniversity, an account that posts Musk’s replies and tweets, tweeted: “The Constitution is greater than any President. end of story | Elon Musk.”

To this Musk replied with a picture and wrote, “May it always be so. It is the most treasured item on my bedside table.”

While one user commented, “Without the constitution, freedom would still be nothing more than a dream”, another asked, “When was the last time you cracked it open to find solutions for our issues?”

Earlier this month, Musk had sided with the White House in condemning former US President Donald Trump for his call to terminate parts of the US Constitution after the release of “Twitter Files”.

The Twitter CEO had posted: “The Constitution is greater than any President. end of story.”

Meanwhile, last month, he had posted a picture on the micro-blogging platform, with four diet cokes (caffeine-free coke), a traditional gun and a revolver kept at his bedside table.