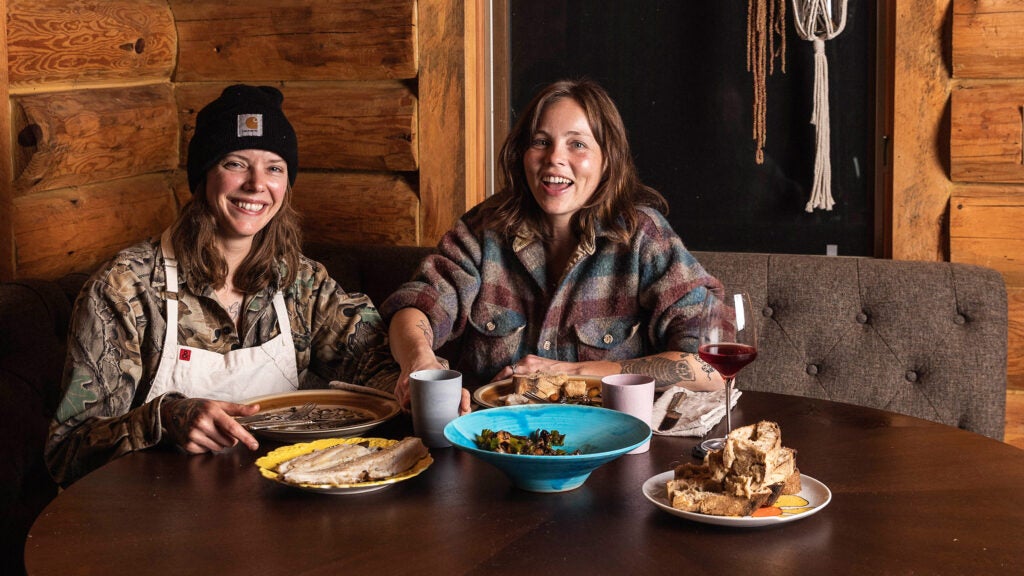 When Iliana Regan bought the Milkweed Inn in Michigan’s Nahma Township with her wife, Anna Hamlin, in 2019, she was searching for home. One might assume the critically acclaimed founding chef of the Michelin-starred Chicago restaurant Elizabeth might feel overly secluded at Milkweed; the 150-acre property is set deep in Hiawatha National Forest, a wide swath of land where three Great Lakes meet at the US-Canadian border. But it was here that the couple planted roots, planning to run the 12-guest bed-and-breakfast during the six months of the year when the dirt road leading to the rustic cabin wasn’t buried under lake-effect snow.

So in 2019, Regan’s first memoir, burn the place, which tangled with her childhood, alcoholism, and path to becoming a chef, was long-listed for the National Book Award. (The last food writer named a finalist was Julia Child, in 1979.) Regan then pursued an MFA in writing from the Art Institute of Chicago, largely attending classes remotely from the Upper Peninsula between hikes and homestead chores at the Milkweed Inn, which she and Hamlin opened in 2020 to weekenders. The aromas, ingredients, and cooking techniques she used to draw a following to Milkweed occupy the pages of Regan’s latest memoir, field work which documents her childhood in northern Indiana and her adult quest for the comforts and familiarity of home. Each of Regan’s books describes the turmoil within her life with both pointed assurance and vulnerability: her oscillation between sobriety and addiction, her three marriages, her six consecutive Michelin stars, and the death of her beloved sister Elizabeth, for whom the Chicago restaurant was named .

Regan has become a reference point for modern American cuisine: she has been profiled and reviewed by The New Yorker, Lucky Peach, other The New York Times. And the inn is a smashing success, typically selling out a season in advance. Blending foraged ingredients with East Asian, Eastern European, and midwestern cooking techniques, her style is uniquely American. Regan, who never went to culinary school, discovered her knack for food as a child. “When I worked at some fancy restaurants, I knew more about seasonality and what certain foods were than a lot of the chefs, just from having grown up around them,” she told me.

The 43-year-old was raised in Merillville, Indiana, a Chicago suburb, on a ten-acre farm in a working-class family. There she learned about the color, flavor, smell, and toxicity of black walnuts. She observed the crooked posture of certain mushrooms and discovered that not all of them were edible. She ate homemade ferments and Maruchan ramen noodles. The last of four daughters, she was astute from an early age. “There was a lot of attention to where the wild plants were and what they’re doing, when they’re flowering and when they’re ripening,” she says. “And so every time I’m going out on a path foraging, I have to constantly be watching what’s available.”

Regan’s great-grandmother ran a popular restaurant in town, and although it closed before she was born, Regan considers cooking a birthright. “All my sisters are really good cooks, and my mom’s a good cook, and my dad’s a good cook,” she says. “Even if I tried not to do it, this might still have been the outcome—it was going to happen no matter what.”

Regan started finding her way around a kitchen when she was 15, and during her college years she worked at some of Chicago’s most celebrated restaurants. She also sold pierogi and microgreens at farmers’ markets, and in 2010 began hosting a supper club in her apartment. Its success attracted investors, who backed the 2012 launch of Elizabeth. Regan’s cooking, delicate but also fun, earned her Food and Wine magazine’s prestigious best new chef accolade in 2016. After the closing of a short-lived second restaurant and a bakery in 2019, Milkweed presented itself as a refuge from the daily grind. In 2020, she transferred ownership of Elizabeth to two of its employees and committed herself to her new endeavor 350 miles north. “I came out here to the woods because I always wanted to do something that felt a little bit more sustainable,” Regan says. “It just made sense to be cooking for ten people a week rather than 150.”

“I came out here to the woods because I always wanted to do something that felt a little bit more sustainable. It just made sense to be cooking for ten people a week rather than 150.”

At Milkweed, a bevy of meals are presented to guests who make the pilgrimage for a $750-per-person weekend of fished, foraged, and fermented dishes cooked by Regan in the cabin’s small kitchen. When diners arrive on Friday, she builds a large outdoor fire, then conjures up the entire first meal using different parts of the blaze. Her goal has been to prepare “as much as I possibly could, and use as little as possible, and forage as much as I possibly could myself.” In the process, the menus have transformed into something woven from the land. A recent evening saw her serve a dish of young milkweed pods, fried and served with a ketchup made from chokecherries.

Between cooking for her guests, Regan finished up fieldwork. “I write outside, even in winter,” she says. “I have just as much attention deficit as the next person. When I’m outside, I’m a little less distracted.” field work’s vivid, lengthy descriptions of foraging linger on the often overlooked connections between people and the outdoors. Regan spends several pages detailing the sense memories associated with a single moment in the woods, like collecting mushrooms with her father—unearthing powerful recollections related to coming of age, trauma, and a sense of home.

Childhood impressions of the homestead maintained by her parents, sisters, and tight-knit extended family have been elusive for Regan as an adult. “I’m still searching for that feeling myself. If I die and go to heaven, it will be that farmhouse. I guess that’s my place,” she says. Despite cooking in Chicago for the better part of 20 years, she now thinks of that city as a place she was just “passing through.” Putting down roots at Milkweed helped ground her, she says, satisfying a persistent yearning for an origin point. “I’m still that place, though I’m a little bit of this one now, too.”