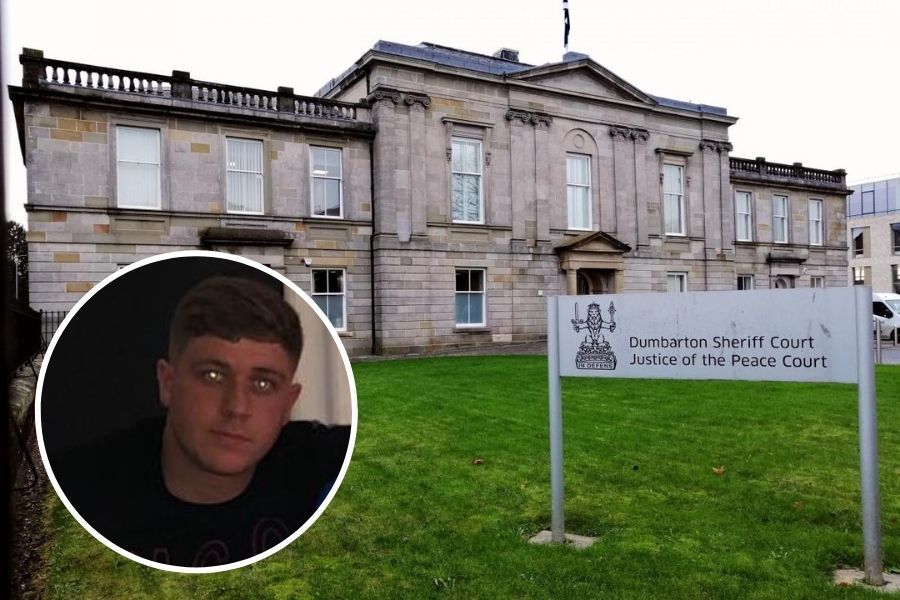 A TEENAGER kicked off at his partner in a Whitecrook flat following his birthday night out before being found hiding under a bed by police, a court has heard.

Michael Gilmour was handed a community payback order when he appeared at Dumbarton Sheriff Court on Friday having earlier pleaded guilty to three charges.

The 19-year-old admitted to being in a threatening or abusive manner by shouting and swearing in the early hours of the morning on July 19, 2021, at the property in Glasgow Road.

He also threw objects around the property and refused to leave, whilst he uttered offensive and derogatory remarks and assaulted a police constable.

Gilmour was said to have caused the disturbance shortly before 3am on his birthday last summer.

The fiscal depute said: “The witness was at home with a friend but was awoken by the sound of a disturbance in the common close.

“The witness heard a male and female shouting in a violent confrontation, and items were being thrown around in a first floor flat.

“Police were contacted and the witness recorded the incident on her mobile phone. Police attended and met the witness who took the officers to the flat.

“After knocking on the door they initially received no reply, then the door was answered by a woman who had puffy red eyes and said she had just woken up and that the disturbance was coming from another flat.

“Police observed a kitchen drawer out of its casing and now lying in the living room, kitchen utensils were scattered across the floor of the living room. There was also a broken ceramic object.

“The accused was found under a bed frame in a bedroom and refused to exit. He was shouting and swearing at police.”

Directing abuse at his then partner, Gilmour shouted: “F**k off, this is all your fault.”

He eventually emerged from the bedroom and adopted a fighting stance with his arms raised and his fists clenched.

He is also said to have kicked out at the shin of officers after being arrested and placed within a police vehicle.

Stephen McGuire, defending, told the court: “It was his birthday that morning and he had been on a night out with his partner the night before, it didn’t plan out the way he had wanted.”

Sheriff John Hamilton issued Gilmour, of Baird Avenue in Helensburgh, with a community payback order meaning he must carry out 120 hours of unpaid work within 12 months. He also wants to be subject to supervision by the social work department for 12 months.