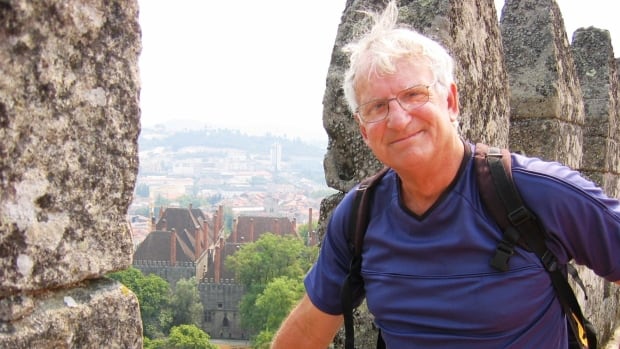 A 76-year-old man with a shattered leg bone who had been languishing on a stretcher in the hallway of a small-town hospital since Sunday is now getting his badly needed surgery in London.

Ron Prickett of Sault Ste. Marie was in a cycling accident at Sauble Beach. He fell after swerving on a gravel road to avoid a motorcycle and his tire slipped on loose stones.

Prickett was taken by ambulance to Wiarton Hospital, part of Gray Bruce Health Services. He was in excruciating pain in a tiny makeshift room in one of the facility’s hallways, with nothing to distract him and no ability to turn the lights on or off.

“I have a fluorescent light over my head that is operated externally down the hall,” he told CBC News on Wednesday before learning he’s finally been accepted in London. “It’s got plastic sheeting on the walls. It’s not a proper bed. There’s no TV or anything, just bare bones.”

On Thursday, Liselle Prickett, Ron’s daughter, told CBC News her father was scheduled for surgery in the morning at London Health Sciences Centre.

“I hear that he might be sent back to Wiarton to recover. Let’s hope he won’t be in the hallway again,” she said via text message.

Prickett feels he should have been transferred on the day of his accident to London Health Sciences Centre, the largest hospital in southwestern Ontario. It has the facilities and surgical expertise he needs to repair his leg — except, he said, a bed shortage in London had prevented him from leaving Wiarton.

“It blows my mind that in Ontario, we have these facilities and I can’t get a broken bone fixed. I have to lie around with a broken bone in my body for four days,” he said Wednesday. “It’s so frustrating. I have no control.

“My family is doing as much as they can for me, but there’s nothing for them to do. It’s all happening in some board room down in London.”

A spokesperson for London Health Sciences Center said the hospital has “been challenged with close to 100 per cent occupancy for months,” but did not specify why Prickett was being forced to stay in Wiarton for four days.

Mary Margaret Crapper, chief of communications and public affairs for Gray Bruce Health Services, told CBC News by email on Wednesday that the hospital could not discuss Pricket’s case due to “privacy reasons.”

She said Wiarton Hospital is “at capacity” and “experiencing staffing shortages,” and finding a bed can “take time.”

“Those who are waiting in our care for transfer to another facility are closely monitored. We recognize this wait can be stressful for patients and for their families.”

Prickett’s experience is the latest example of a provincial health system training under staff shortages and capacity issues, as fed up and underpaid hospital workers quit from the exhaustion of battling the COVID-19 pandemic in an underfunded health system for more than two years.

‘Get it done,’ patient says to Ford government

Earlier this month, Premier Doug Ford called on the federal government to open its wallet and deliver more health-care spending to the provinces. But Ontario’s opposition puts the blame squarely on the premier, arguing his penny-pinching policies caused the problem in the first place.

Prickett, who was still lying on the same stretcher paramedics brought him on to the hospital on Sunday when interviewed this week, borrowed a well-worn phrase from Ford’s recent election campaign to urge politicians to put politics aside and fix the problem.

“Get it done. Support the nurses, support the doctors and monitor it, make it accountable so these things don’t happen. What century are we in? It’s insane,” he said in a recorded telephone message he asked CBC News to deliver to Ontario Health Minister Sylvia Jones.

CBC News sent the audio message by email to communications staff at the Ontario Ministry of Health on Wednesday.

Anna Miller, a senior communications adviser with the ministry, wrote in an email that the message was passed on to the health minister’s office, but it was not made clear if Jones listened to it.

Miller said in the email that the province is making “historic investments,” including an additional $3.3 billion to hospitals in 2022-23, to end hallway health care.