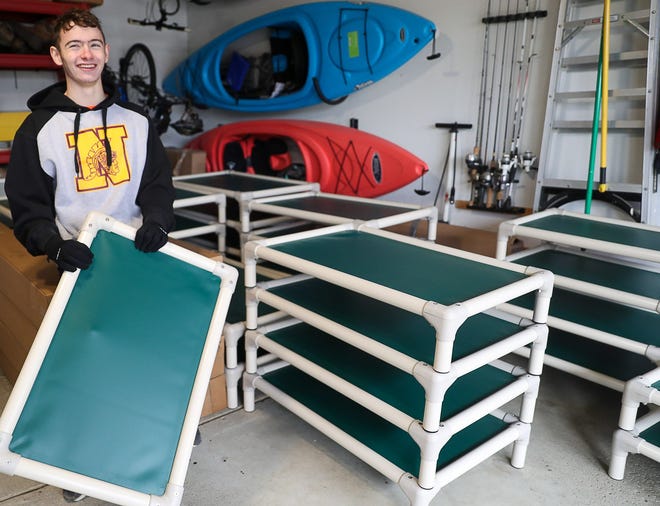 Dogs that are being fostered through Speak for the Unspoken can rest more comfortably now, thanks to Westerville’s Boy Scout Troop 64.

As part of his Eagle Scout project, Jacob Washburn, with help from Troop 64, chartered by the Spring Road Church of Christ, worked to provide 50 Kuranda bed kits for dogs that are being fostered by the nonprofit pet rescue.

“I love dogs,” said Washburn, a Westerville North High School junior. “I chose this benefactor because they’re connected with my mother’s work. They needed dog beds, so the dogs don’t have to sleep on the ground. Kuranda beds lift dogs off the ground.”

Andrea Porzellansparger, executive director of Speak for the Unspoken, said the original idea was to build beds from scratch.

“He got the idea to call the Kuranda company, and they gave him wholesale prices on all the beds.”

Washburn, 17, said he did some research on the beds that are made of PVC and vinyl.

“They’re premade kits,” he said. “Our original plan was to get fabric or vinyl ourselves and cut the PVC pipes.”

On what was his “build day” Feb 26, it was Washburn’s job to lead his fellow Scout members to assemble 30 of the dog bed kits and prepare 20 others for shipping to the rescue’s foster families.

Washburn said Speak for the Unspoken helped him with fundraising, as did his family and troop members.

“A Scout should try to pick something that motivates them,” he said. “He picked something that was close to his heart, which was helping out the animal group. That’s great. His project was a little ambitious because he had to raise a significant amount of money to purchase the beds. We often try to encourage Scouts to do something that’s less money but more work. His was on the more money side, but he did a good job of doing that.”

To achieve the Eagle rank, 21 merit badges must be earned, Washburn said.

As part of the process to earn the Eagle badge, he said, his job was to get everything prepared and ready for the build day.

“My job for this is to lead it,” Washburn said. “I’m not supposed to touch any of those beds. I make sure it’s going well in a leadership role.”

His twin brother, Ryan Washburn, who’s a member of the troop, said his assignment was to help package 20 dog beds for foster families.

“I think as a leader, Jacob got everyone to do certain things,” he said. “I think he did a phenomenal job leading.”

Porzellansparger said Speak for the Unspoken, based in Grove City, is a special-needs, foster-based, all-volunteer animal rescue.

“We focus on rescuing special-needs animals, meaning deaf dogs, blind dogs, dogs with three legs, dogs with severe heart conditions. We also take in puppy-mill survivors that have been dumped by the mills.”

She said the rescue has more than 300 foster families that provide care for dogs in their homes in Illinois, Indiana, Michigan, Ohio and Pennsylvania.

“I started fostering in March of 2020,” she said. “I don’t have any pets of my own. Patty Melt needs no cats or dogs in the house. She has been chilling with me, learning how to be a good dog. She’s getting some life experience with me. She’s a happy girl. She loves toys and being outside.”

Dogs available for adoption are posted on the rescue’s website at speakfortheunspoken.com/adopt.

Washburn offered Patty Melt a tryout on one of the new dog beds, which she happily accepted.

He said he hopes to finish the process of earning his Eagle Scout badge in a few weeks.

Washburn said Scouts typically appear before a panel of 12 people to review everything he has achieved in working toward the highest honor.

He said the organization has helped him become more mature and a better leader, team member and communicator.