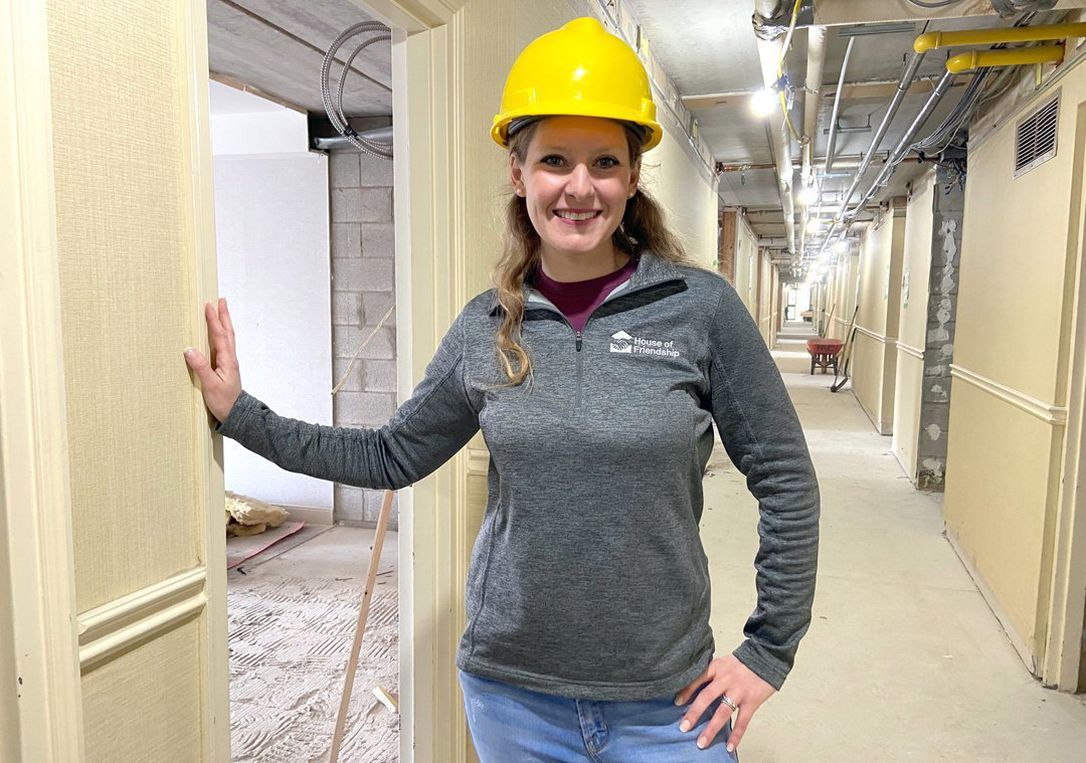 Jessica Bondy, House of Friendship’s director of housing services, inside the former Comfort Inn at 190 Weber St. N. that’s currently being renovated as a men’s shelter.

That’s how Jessica Bondy prefaced most stops during a tour of the former Comfort Inn in Waterloo that’s currently undergoing renovations to become a 100-bed men’s shelter.

However, the House of Friendship’s housing director knows the work underground inside the building at 190 Weber St. N will be more than transformational in appearance.

“We’re excited about the lives we’re going to be able to change and the lives we are going to save as a result of providing a dignified space in our community and wrapping people with health and housing supports,” Bondy said.

The House of Friendship’s 24-7 ShelterCare model that was piloted out of local hotels during the COVID-19 pandemic was displaced by a fire at the Inn of Waterloo last year.

With $8.5 million in provincial funding announced in January, the non-profit service provider is expanding the model into a permanent space to provide transitional housing for up to 100 men who are experiencing homelessness and don’t have a safe place to stay, with provision of primary care, mental health and addictions services and help to find stable housing.

The entire first floor will be accessible, and 20 per cent of the participant rooms will have barrier-free fixtures.

Walls are currently being torn down to create larger spaces for intake and an on-site medical clinic, as well as dedicated space for the region’s needle syringe program.

“About 97 per cent of the folks we serve are actively navigating an addiction, so we want to bring in community partners who are supporting folks around harm reduction, safe use, addiction services and peer base supports,” said Bondy. “We want to make sure this is a place that’s not a shameful part of their journey, so that they are able to get the supports they need and be safe.”

The shelter’s design, supported by Walter Fedy, has been carefully developed with a “trauma-focused lens,” with the goal of providing open, communal spaces with outdoor elements, calming color palettes and unobtrusive lighting.

“This wasn’t a hotel that had party rooms or community spaces or lounges or conference rooms, so we’re building a lot of that work in to make sure that this building is really going to work for the program and for the folks that are going to be staying with us,” Bondy said.

“Now is the time to get this facility right,” said House of Friendship executive director John Neufeld.

“We must have the long term in mind and do all we can to set this up for success so that the individuals who come to this ShelterCare program will achieve their best possible outcomes. We cannot short-change the process.”

The project is supported by a $2.5-million loan from the Kitchener Waterloo Community Foundation and $570,000 in annual capital financing support from the region toward mortgage and renovation costs.

An operational agreement including a collection of allied health care professionals in primary care and addictions is still being finalized.

“The goal of what we’re doing is to really build that circle of care for someone,” Bondy said.

“Once they’re housed, we want to maintain those relationships.”

Other spaces will be dedicated to medical isolation and elevated risk.

“We’ve also heard so much about the trauma that comes with doing this work, so we’re going to have a nice kind of calm, Zen space for the staff team to be able to decompress and become more centered after a traumatic incident happens .”

“It is a challenging population to serve, and seeing visible homelessness and trauma and pain and suffering brings out emotions in people,” she said, adding that the House of Friendship is maintaining open lines of communication with neighborhood associations and businesses.

“We want to be a good neighbour. We want to make sure this is going to work for everyone.”

Sliding doors and large windows in guest rooms will be removed and replaced by smaller punch windows, wall infill and corrugated metal siding on the exterior. New heating and cooling systems will improve the building’s energy efficiency and lower operating costs over time.

Renovations are expected to be completed by fall of this year. In the interim, House of Friendship continues to provide transitional housing services for up to 26 men at its former shelter location at 63 Charles St. E. in Kitchener.

Many have worked tirelessly to advocate for a better care model for those experiencing homelessness. This is a first step, Bondy believes.

“This is what I hope is the first of many,” she said, noting that 75 per cent of those experiencing homelessness are males, but that women and youth should also have access to such triaged care.

“I really see this also as an incubation site where we can learn. We’re bringing researchers in, we’re bringing students in. We’ll be looking to hire more staff, doing on-site training and bringing more services on board to make ShelterCare happen.”

STORY BEHIND THE STORY: The House of Friendship launched a virtual, behind-the-scenes look at renovations for its new men’s shelter in Waterloo, and the Chronicle followed up for a tour to learn more.