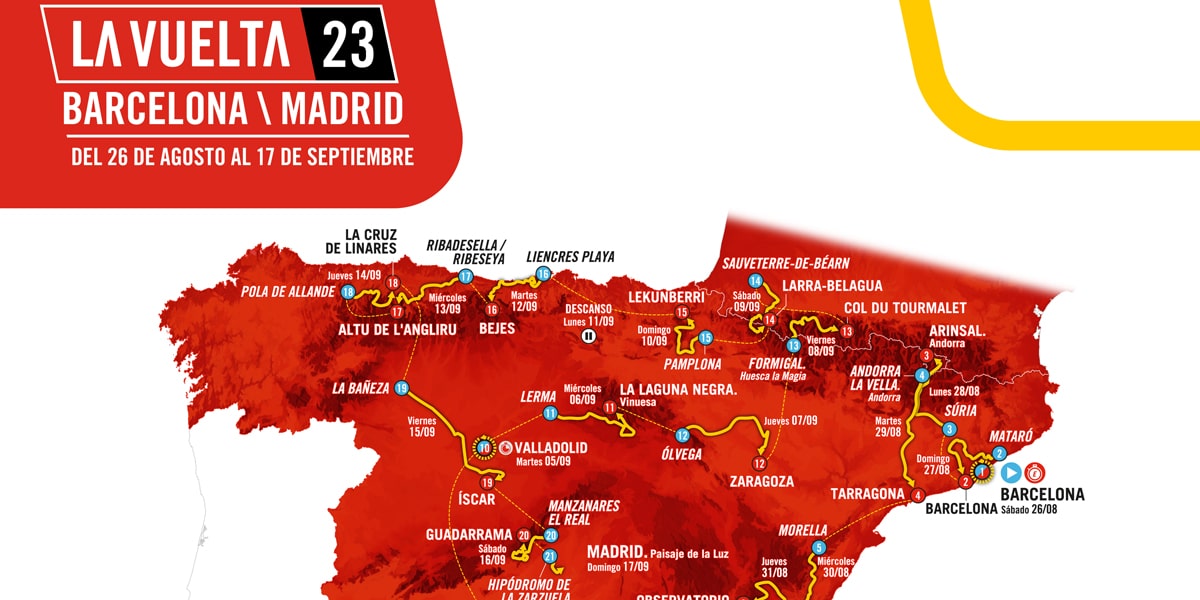 Race Preview: The third Grand Tour of the season, the Vuelta a España has announced its selection of mountain climbs and summit finishes for the 2023 edition. Ed Hood has cast an educated eye over the ‘ruta’ for his ‘PEZ First Look’.

The 2023 Vuelta a Espana route

Marc Soler [UAE & Spain] is a man who knows a lot about mountainous races having won Paris-Nice in 2018 and two Vuelta stages since then, he had this to say about the route of the 2023 Vuelta a Espana; ‘they’ve gone too far!’ He means that of the 21 stages, of which two are against the watch, half of the remaining 19 stages finish atop or just off the top of hills or in most cases, mountains. 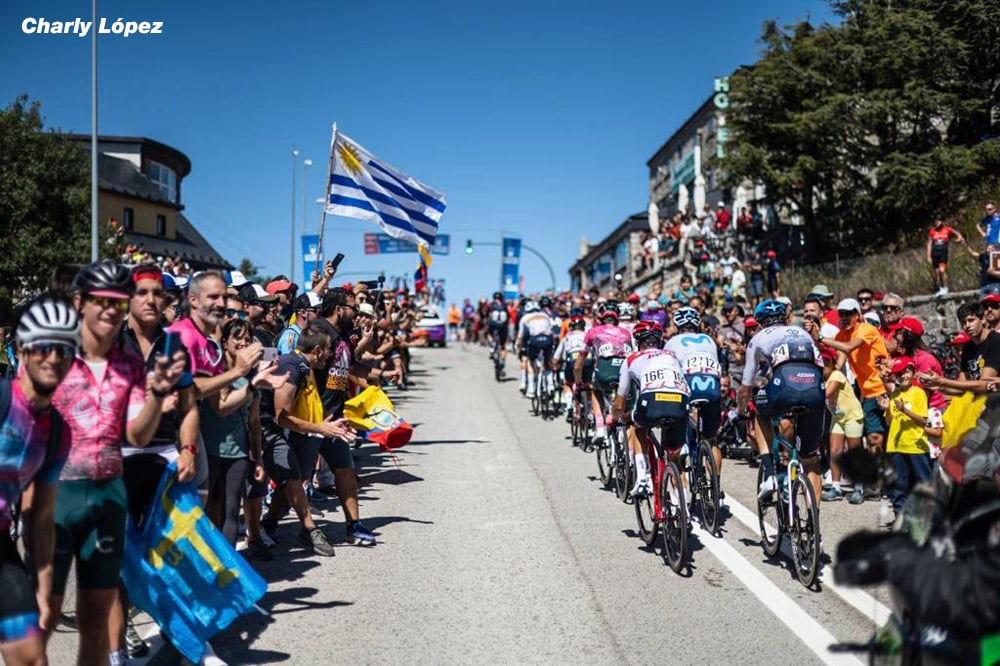 Stage One: Barcelona > Barcelona
A hard start for the lightweight climbers with a flat, fast but technical team time trial blast around the streets of Barca – let’s just hope it doesn’t rain. 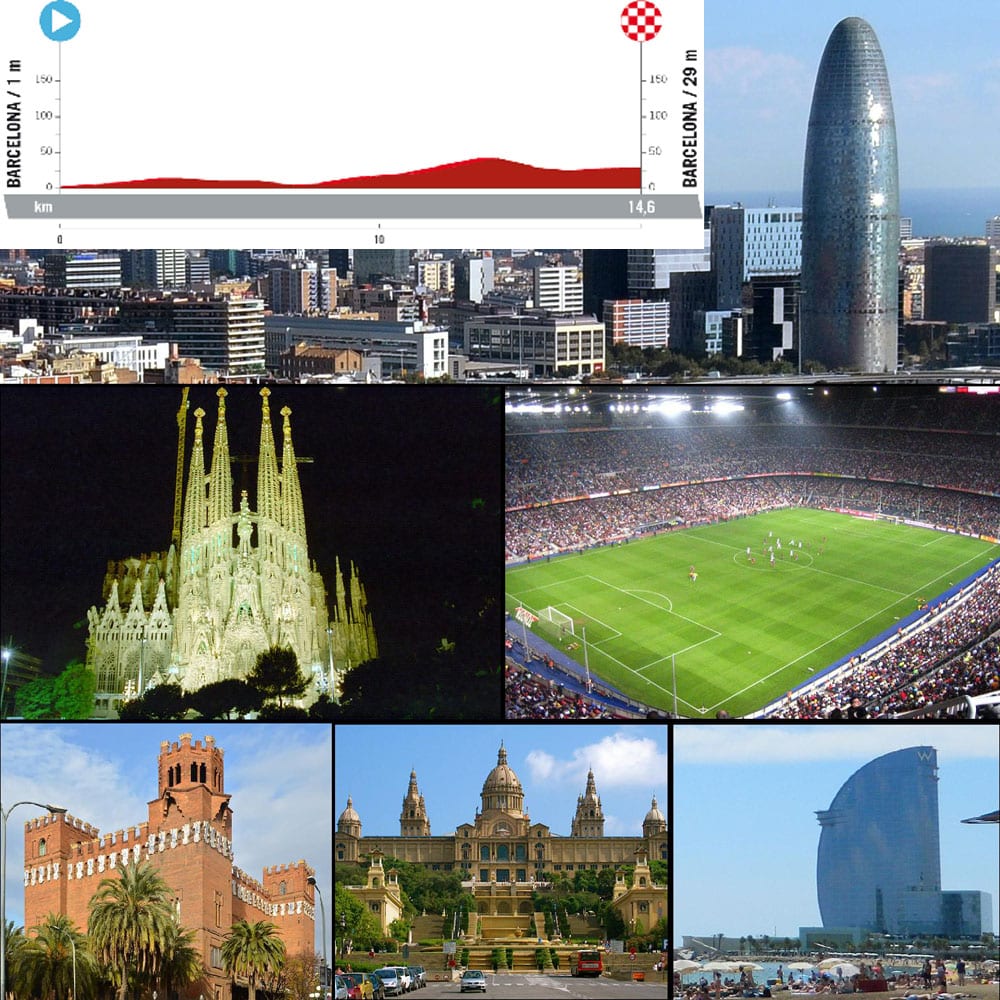 Stage Two: Mataro > Barcelona
Finishes on Montjuich, scene of the late lamented ‘Escalada’ a race I used to attend every year in the late 80’s and early 90’s – this is one for the Michael Matthews of this world.

Stage Three: Súria > Arinsal. Andorra
Payback time for the climbers with a double first cat. ascended into Andorra, home to many a rider and where the air is thin. The jersey will change hands. 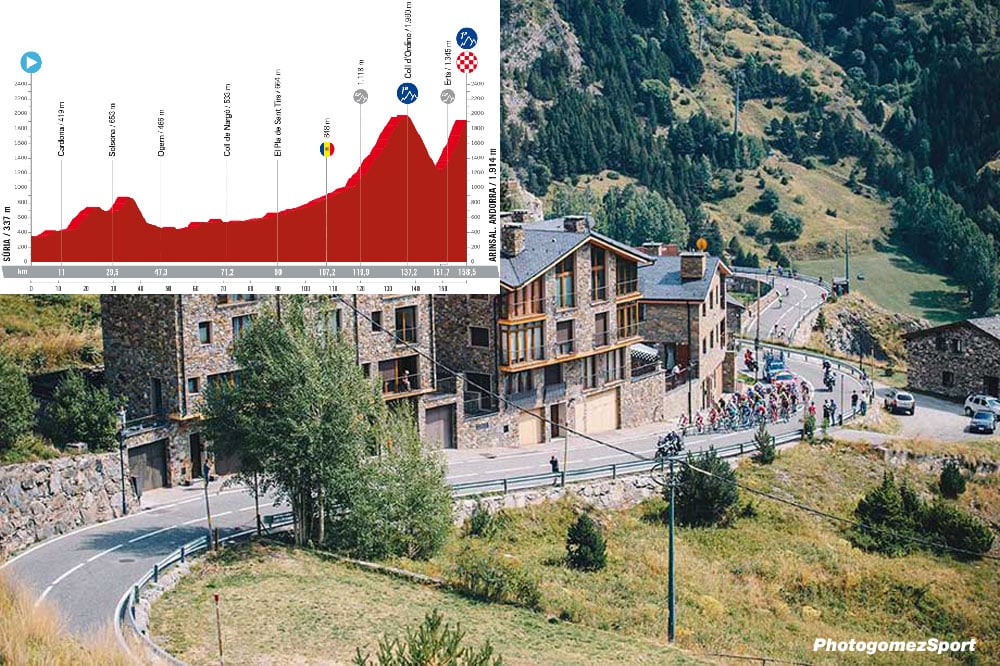 Stage Four: Andorra la Vella. Andorra > Tarragona
For the breakaway or MAYBE a sprint but that the ‘viento’ – that’s it ‘wind’ in English, Dude—might just shape this day. Those helicopter shots of echelons are just so beautiful. 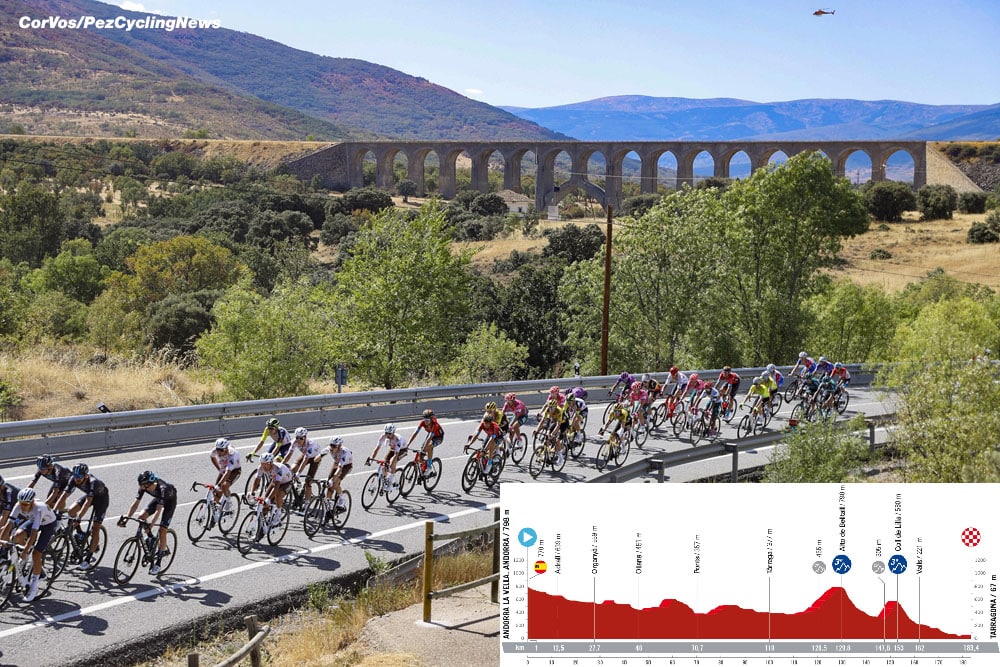 Stage Six: La Vall d’Uixó > Observatorio Astrofísico de Javalambre
When you see the word ‘observatory’ in the title of a race finish you know it’s not going to finish somewhere there’s not a good view of the stars. This one is atop a first cat. monster on a stage where the trend of the final 100K is UP. 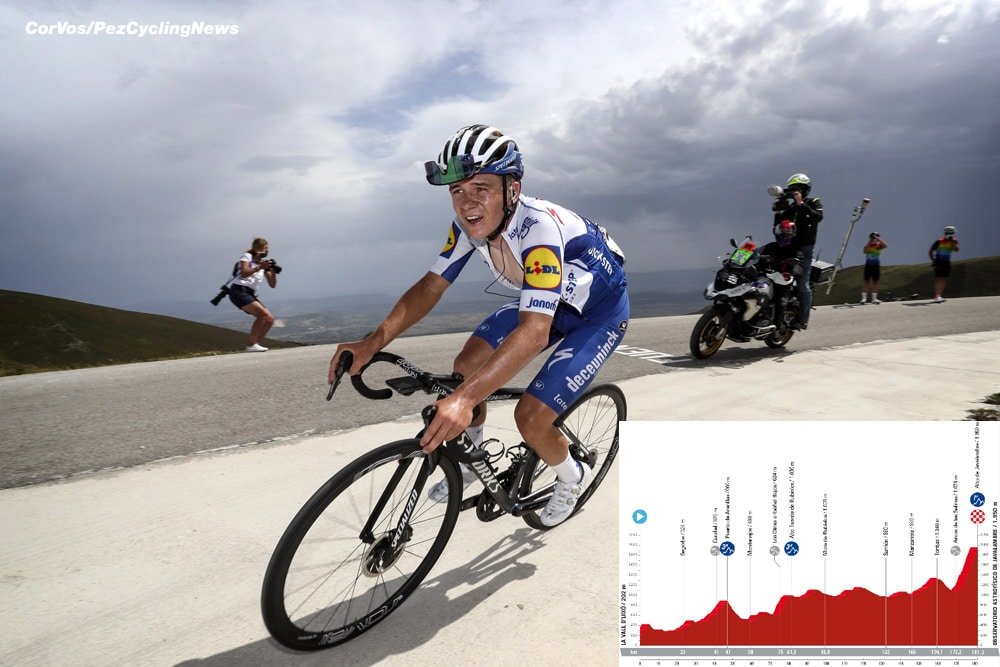 Stage Seven: Utiel > Oliva
For the sprinters, for sure but ‘viento’ might just be the word of the day, again. 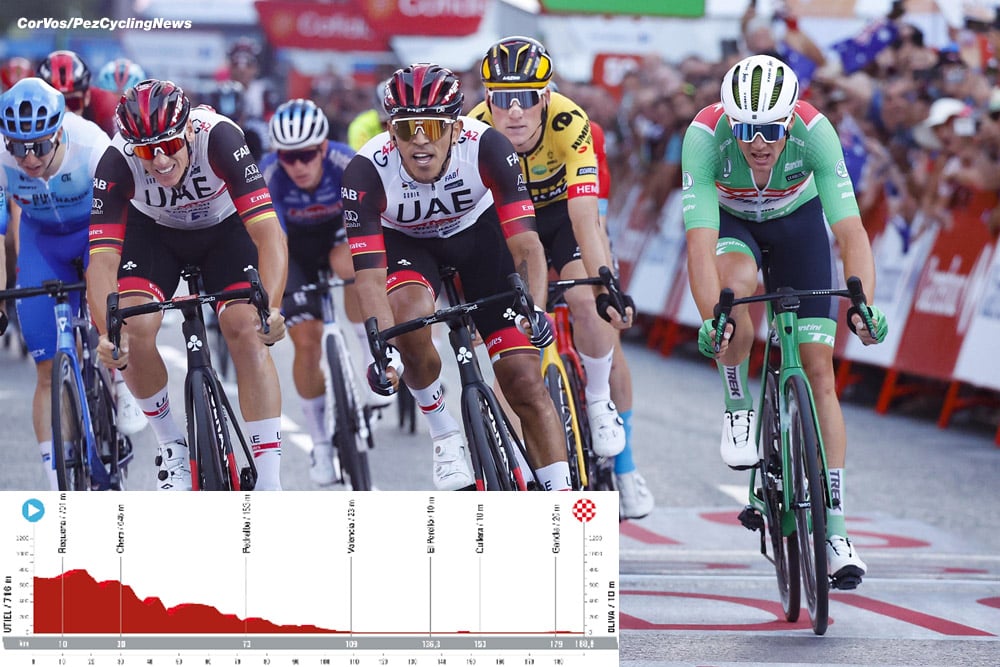 Stage Eight: Dénia > Xorret de Catí. Costa Blanca Interior
Three second cats, a third cat and a finish just off the top off a first cat. giving those ‘big’ just off the back the chance to get back if they throw caution to the wind. Gruppetto! 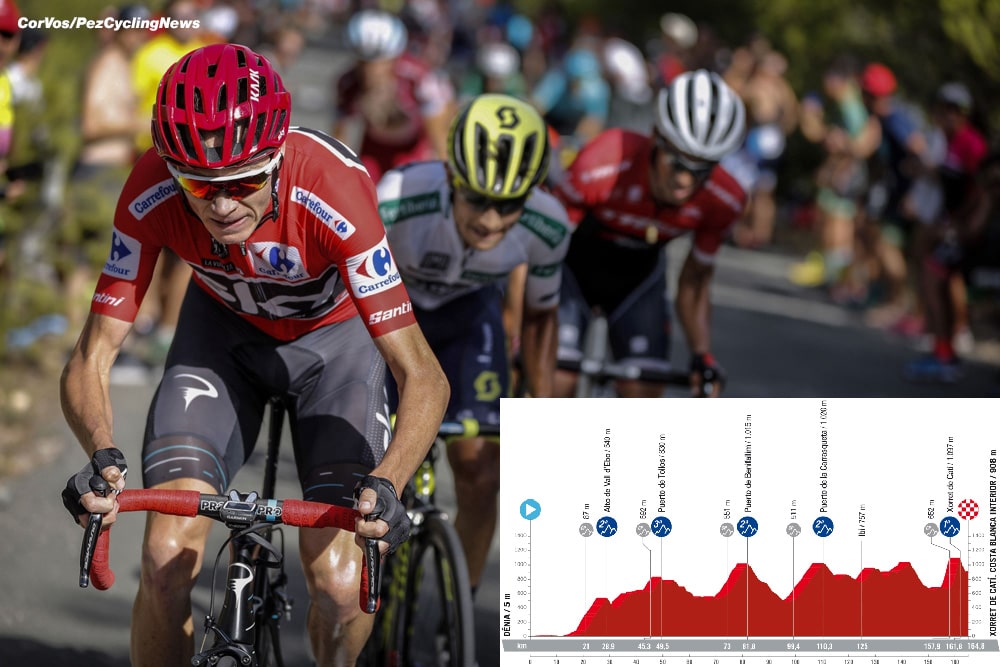 Attacks on the Xorret de Catí

Stage Nine: Cartagena > Caravaca de la Cruz
Another word that sprinters don’t like to see, ‘alto.’ It’s ‘only’ a second cat. to finish on but drags up for 30 kilometers. 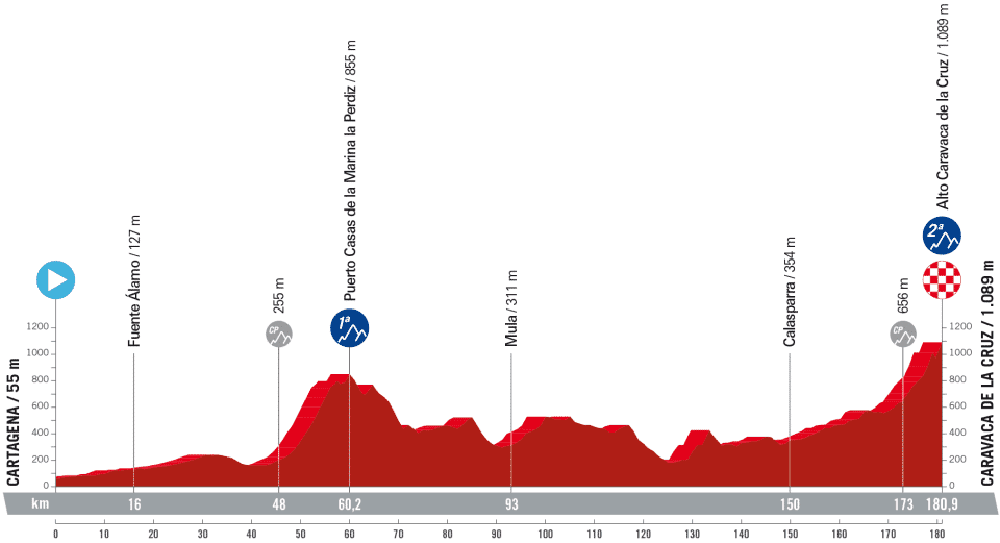 Tough day for the fast finishers

Rest Day One:
David Miller and Ryder Hesjedal were known to sit by the pool with a beer or two on rest days – but like the song says; ‘those days are gone now . . .’ 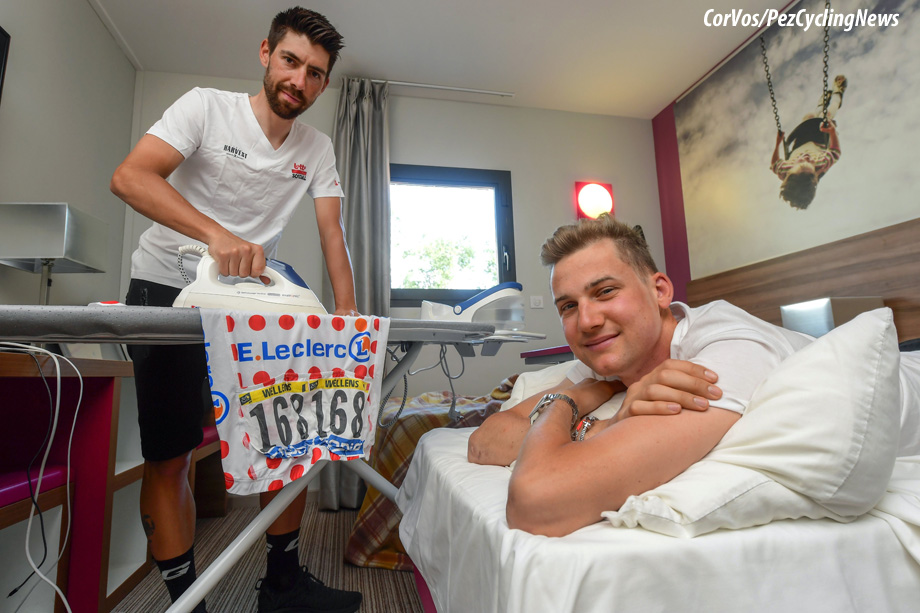 A day off for the peloton

Stage 10: Valladolid > Valladolid
Post rest day good legs or blocked? If you’re a GC guy then you’ll be hoping for the former for this jost with the ‘reloj.’ A bit of a ‘lump’ early but one for the specialists, 58 and 60 rings the order of the day. 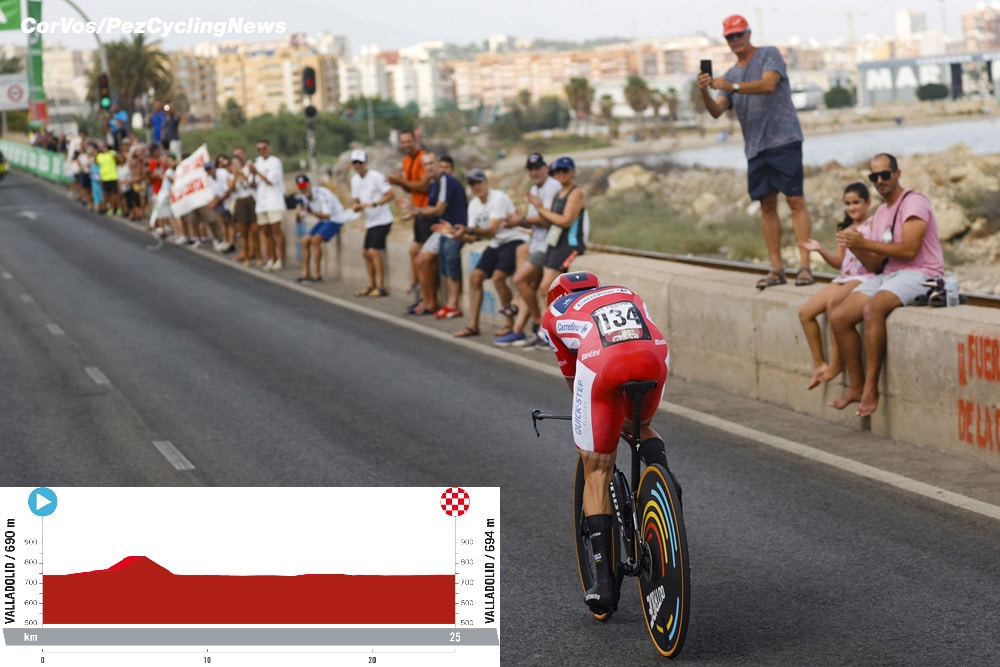 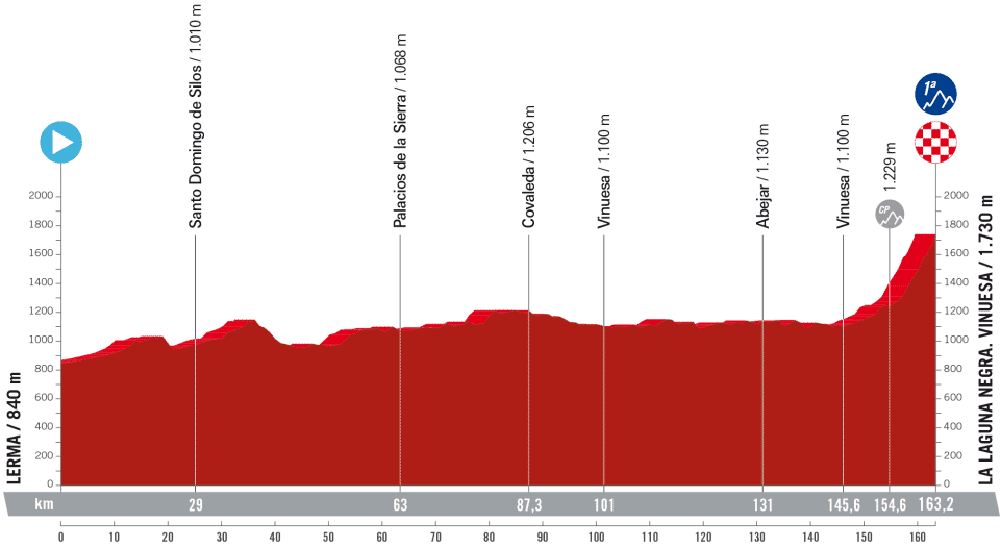 Stage 12: Ólvega > Zaragoza
See Stages Five and Six but again, it could be a Viento day. 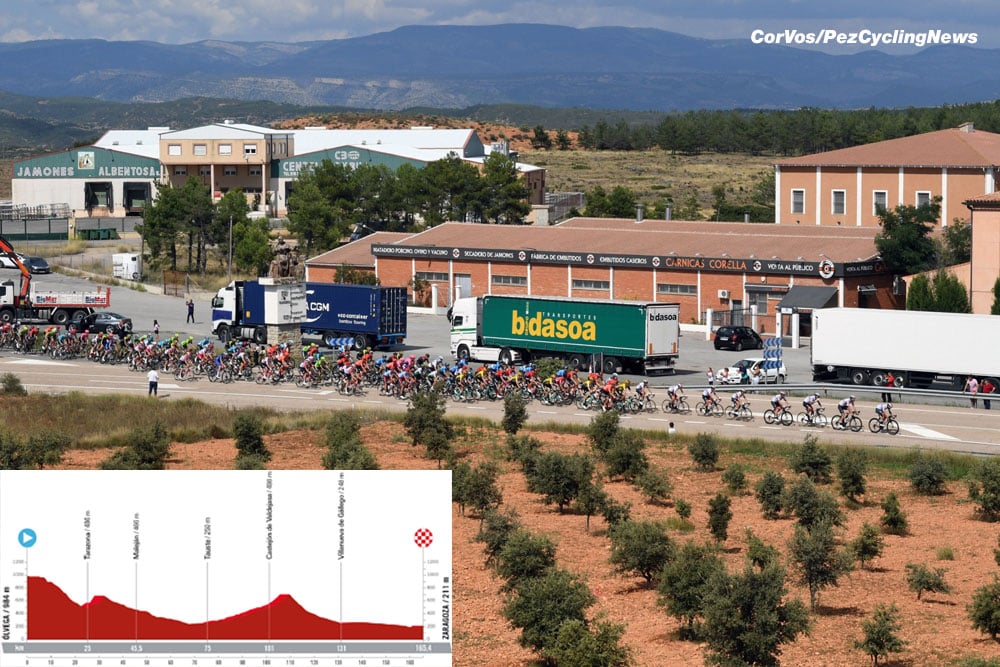 Stage 13: Formigal. Huesca la Magia > Col ​​du Tourmalet
the ‘Queen Stage’ of the Tour of Spain finishes in France – but just any old bit of France. Atop the mighty Tourmalet. There’s also the Aubisque, Soulor and Spandelles en route the finish beast but it’ll all come down to those final 37 kilometers of unrelenting grind. 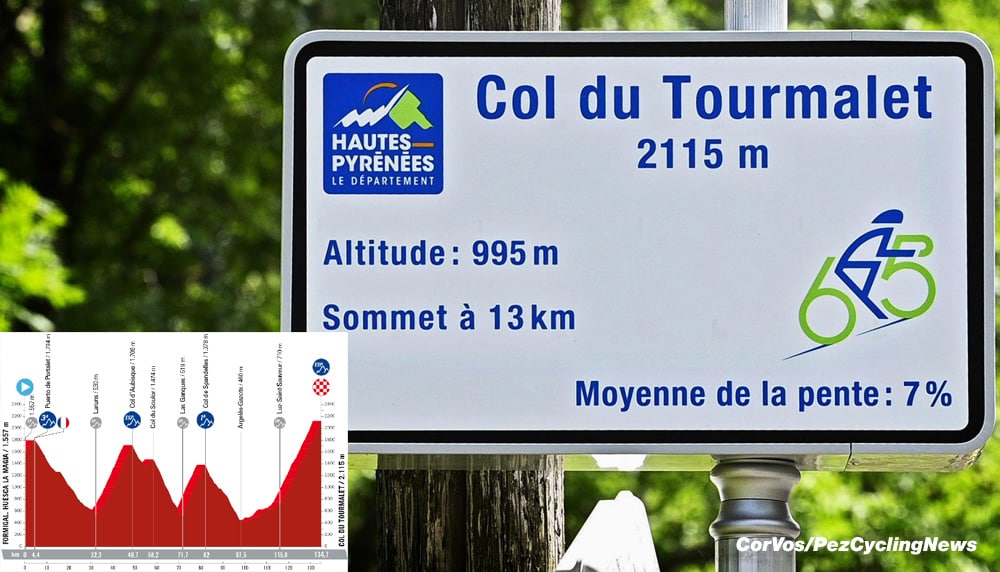 The Queen stage to the Tourmalet

Stage 14: Sauveterre-de-Béarn > Larra-Belagua
The organizers give the riders a recovery day after the stress of the Tourmalet; just the two HC and a third cat. ascends before the first cat. finish on Puerto de Belagua. With a total race distance of 100 miles the time cut is guaranteed to catch out those weakened by the Tourmalet stage. 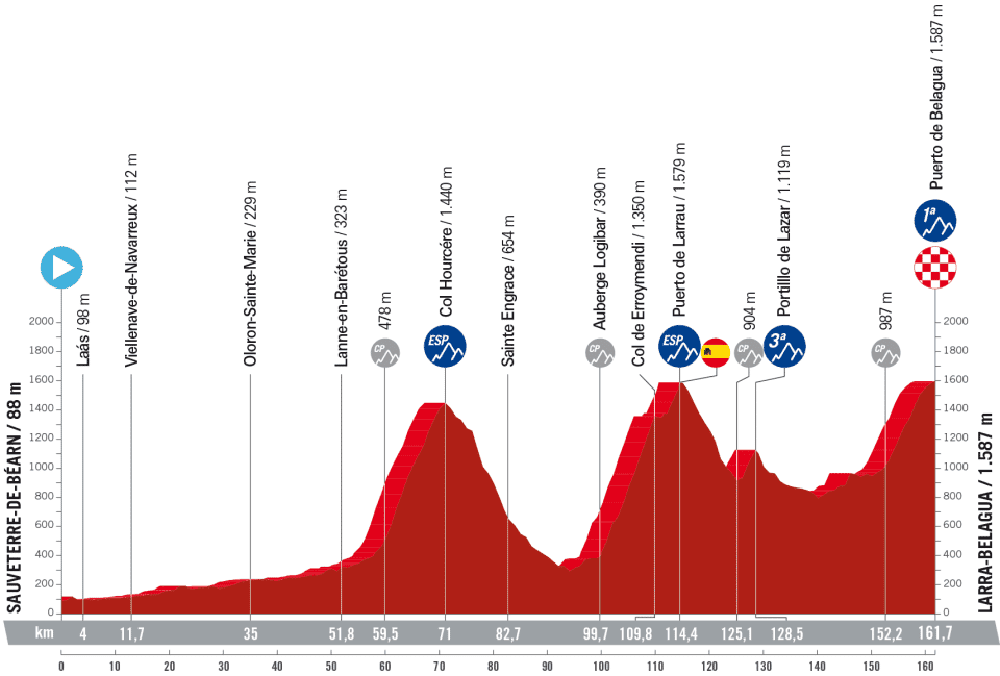 Stage 15: Pamplona > Lekunberri
The breakaway artists should get their day in the sun on this one; rest day tomorrow so you can go deep. 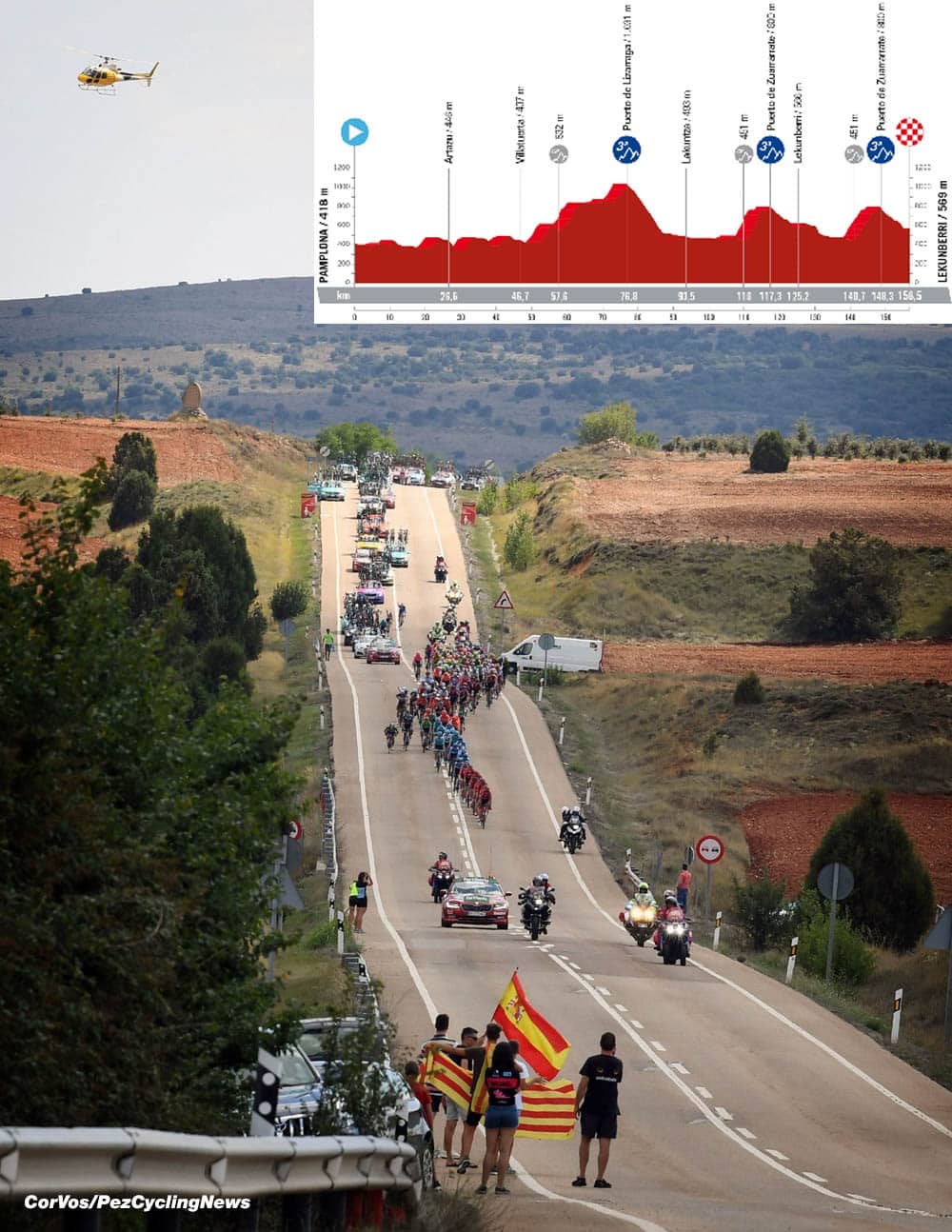 A day before the break 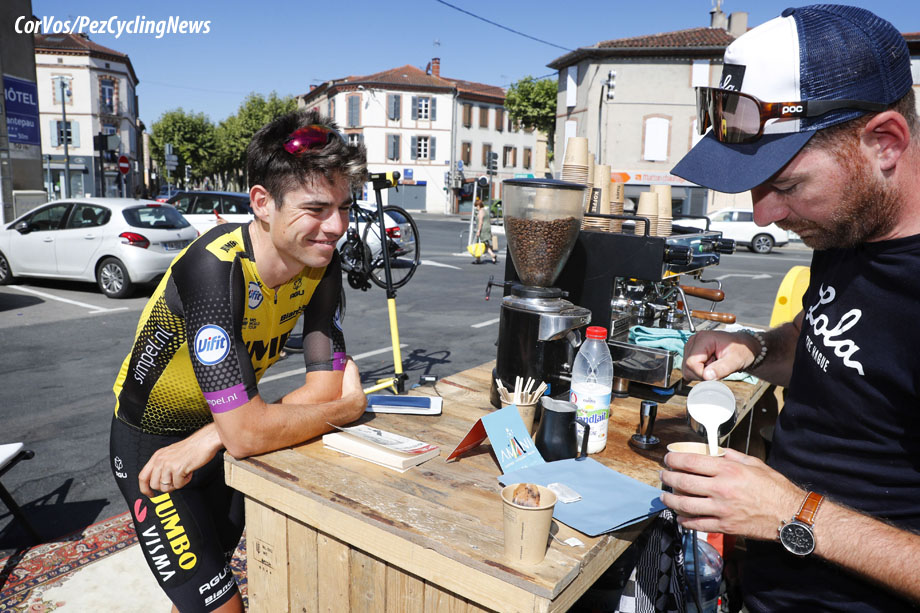 Rest of the day coffee

Stage 16: Liencres Playa > Bejes
Is another breakaway day for those who have recovered well but there just might be a shoot-out with the Bigs on that final cat. two climb to the line.

Stage 17: Ribadesella/Ribeseya > Altu de L’Angliru
The two first cats. along the way are as nothing compared to the finish climb—the terrible Angliru. I’ve been up there a time or two and it’s every bit as savage as legend has it. DO NOT have your ‘jour sans’ today, gentlemen. 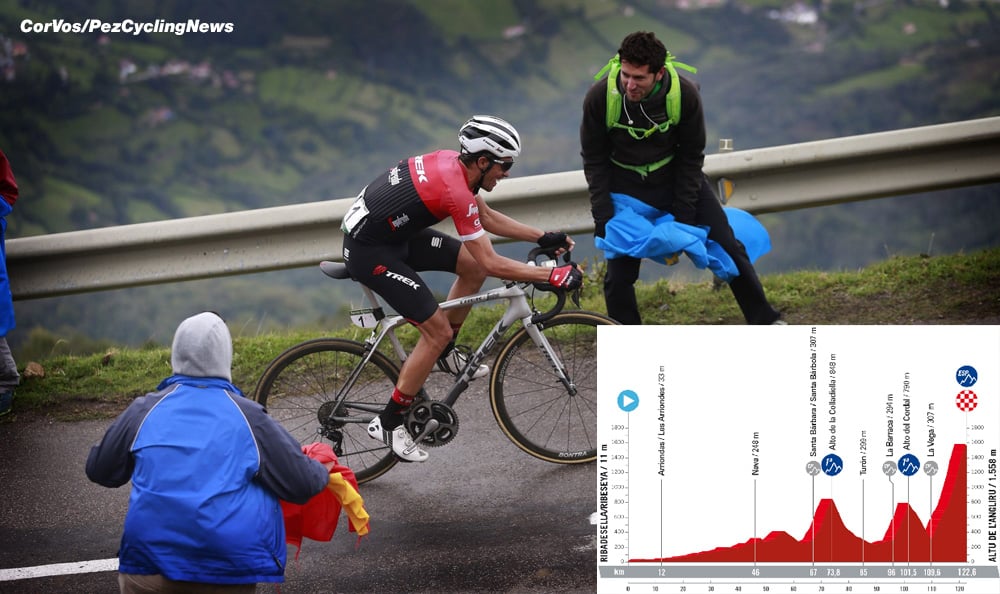 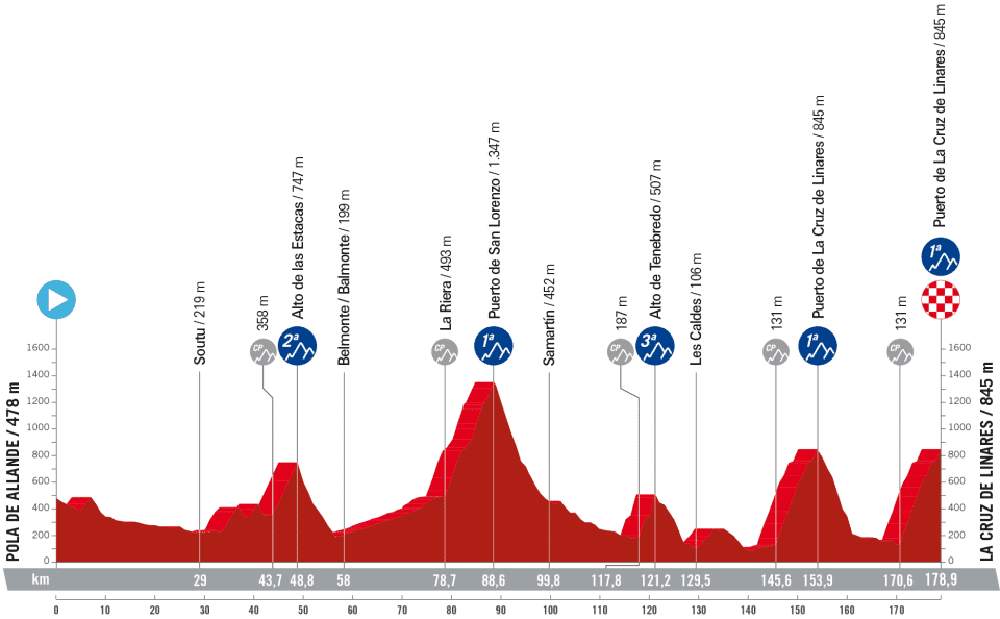 Stage 19: La Bañeza > Íscar
Almost pan flat – but how many sprinters will be left standing by now? But don’t forget old man ‘Viento’ on this day. 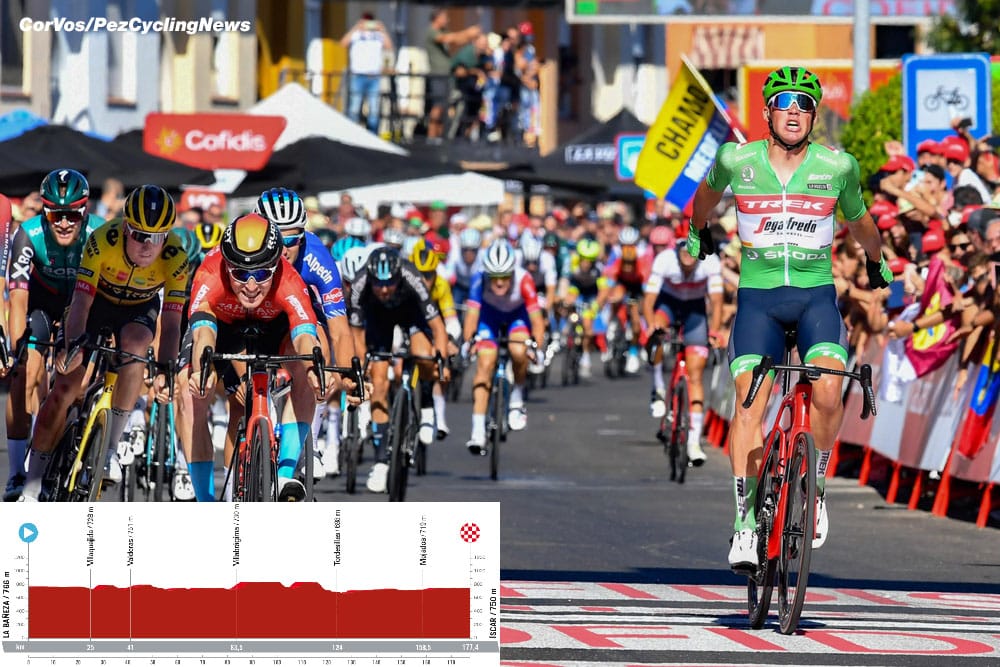 Any strength left of a sprint?

Stage 20: Manzanares El Real > Guadarrama
There are no fewer than 10 third cats. climbs today; it’s one for the breakaway but if the GC isn’t cast in stone by now it could well be carnage. Missing the time cut with one day to go – heart breaking. 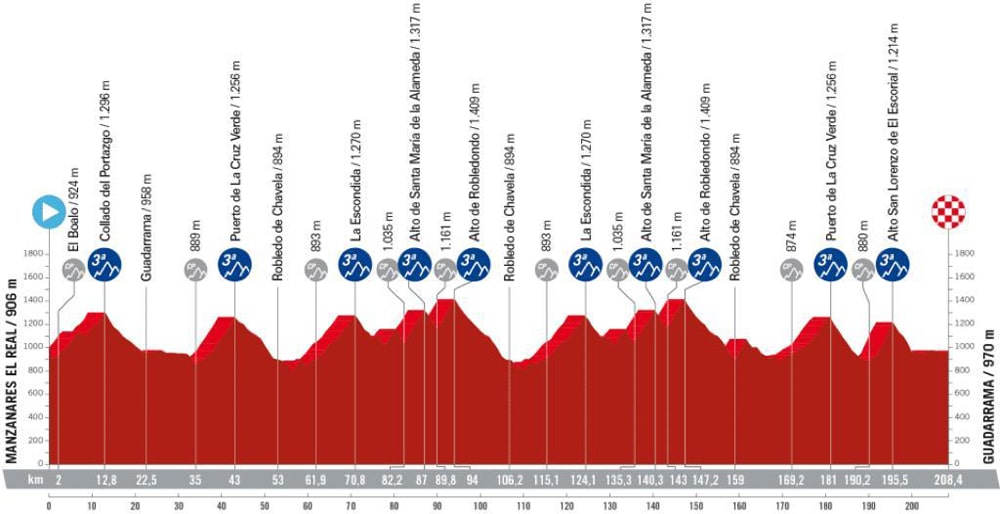 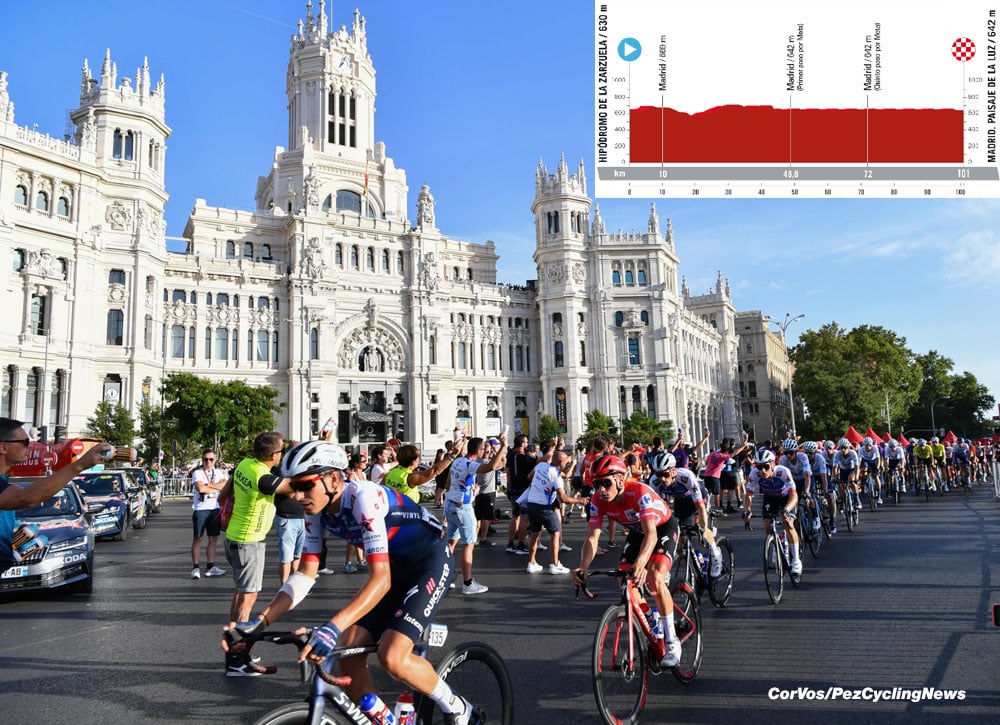 Flat day in Madrid for the final stage 21

A well balanced route it is not – but Grand Tour organizers seem hell bent on sending their races over as many hard climbs as they can cram in. As PEZ mentor and soothsayer, Viktor say; “The Spanish Hill Climb Championships.” 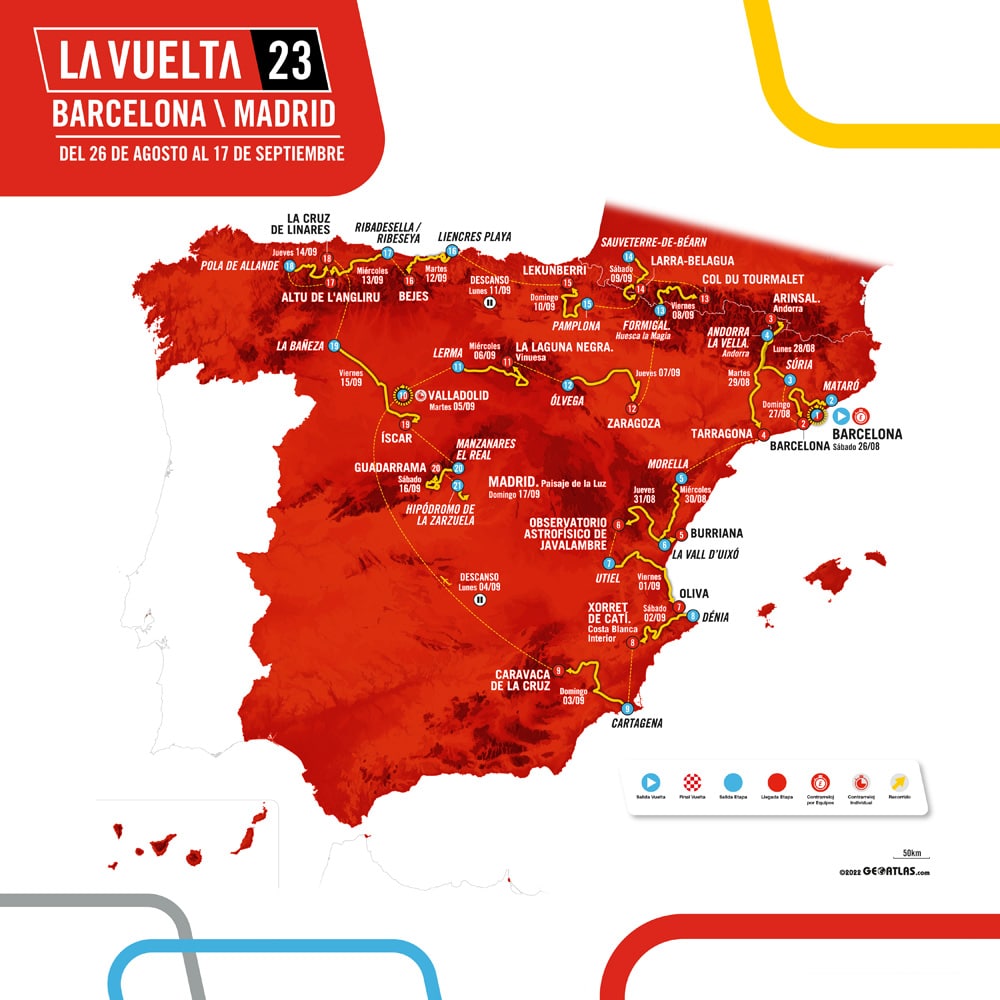 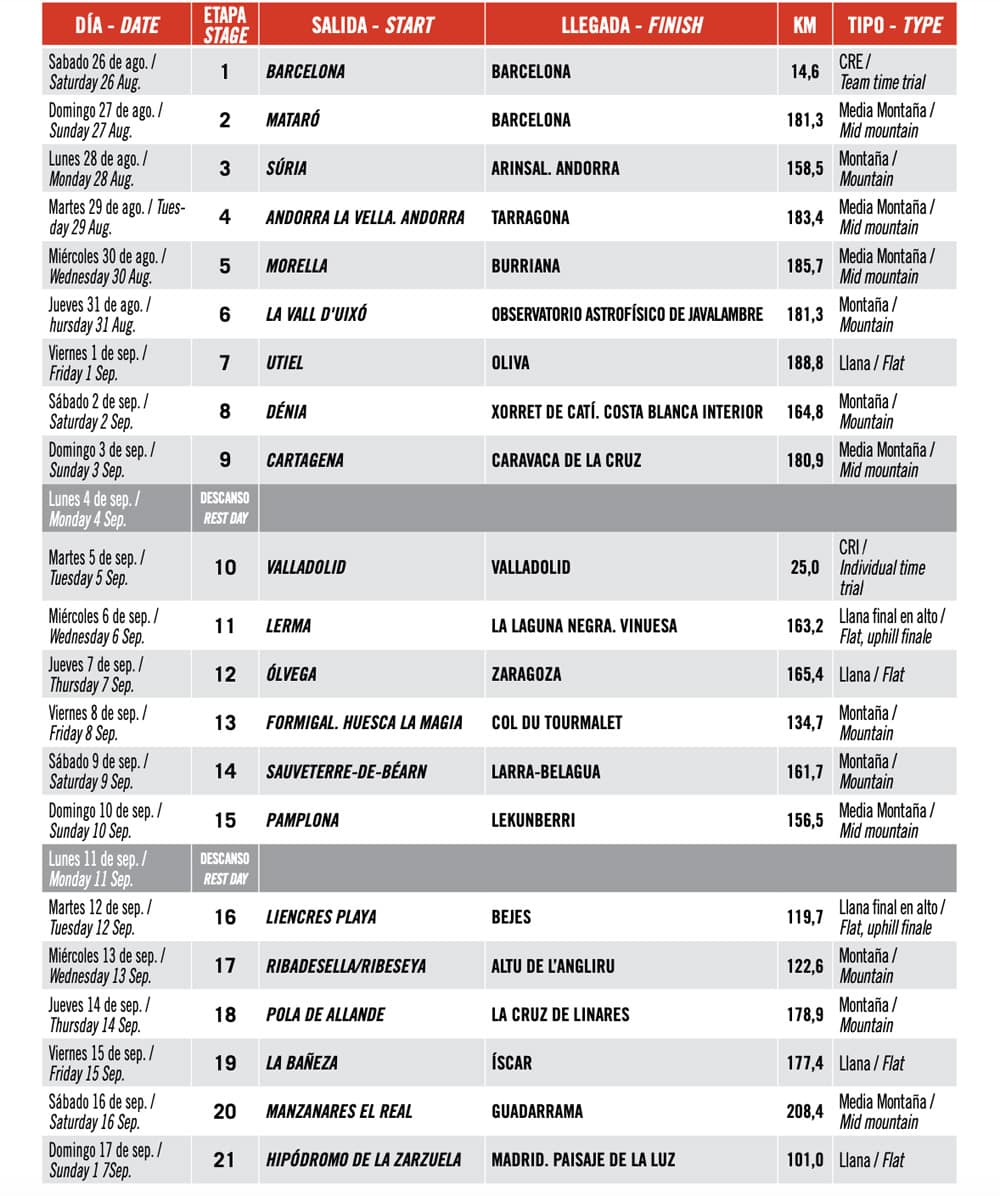 
Like PEZ? Why not subscribe to our weekly newsletter to receive updates and reminders on what’s cool in road cycling?