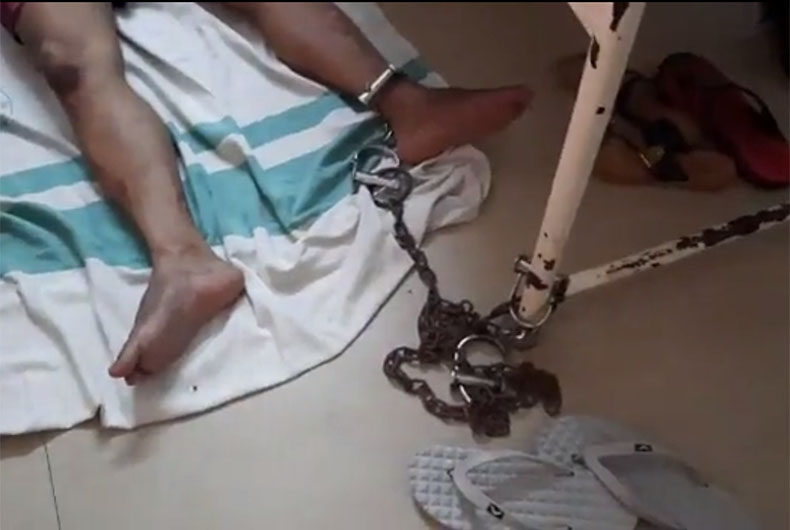 A video of the journalist, Lokanath Dalei, had gone viral on different social media platforms

Bhubaneswar: In a shocking incident, a journalist from Odisha’s Balasore district, who was arrested for allegedly thrashing a cop, was chained to his hospital bed while undergoing treatment.

A video of the journalist, Lokanath Dalei, had gone viral on different social media platforms. In that picture, Dalei was lying down on a floor of the hospital with his legs attached with a handcuff and tied using an iron chain to a hospital bed.

According to sources, Dalei was reportedly called by Nilagiri Police on Wednesday morning for allegedly abusing and assaulting a Home Guard. He was later hospitalized after being allegedly assaulted by cops at the police station.

On April 4, Home Guard Niranjan Rana had lodged a complaint at Nilagiri police station alleging that Dalei abused him in filthy language, beat him up and threatened with dire consequences when he was on duty.

Dalei, serving as a Nilagiri reporter of a local media house, has alleged his arrest is a revenge bid over some news reports against the police. He demanded action against IIC and second officer of the Nilagiri police station.

“In a democracy, one should respect differences in opinions. But putting a handcuff on a journalist like a professional criminal is not acceptable in a healthy society,” he said.

Pradhan has urged the senior police officers to conduct a proper inquiry and take strong action against the officials involved in this act.

For all the latest News, Opinions and Viewsdownload ummid.com App.

Select language to read in Urdu, Hindi, Marathi or Arabic.