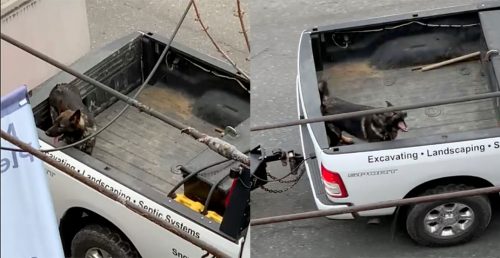 A driver of a local Vancouver rally who opposed vaccination requirements joined the demonstration with his dog in the back of his pickup truck – a movement that is not only illegal but also dangerous for animals.

Lindsay Bring spotted the dog in the pickup truck from the window of her Broadway apartment and filmed the dog pacing and barking amidst all the honking.

“It’s extremely noisy, it’s even annoying to me, so I can’t even imagine how that dog is feeling,” she told Daily Hive. “No dog should be in the back of a pickup truck, especially when it’s this noisy.”

The dog, which appeared to be a German shepherd, was in the back of a white pickup truck pulling a trailer with a sign in support of the “Freedom Convoy” that arrived in Ottawa on Saturday. The movement is made up of people opposed to vaccination mandates.

Metro Vancouver landscaping company Excel Enterprises’ truck drilling logo. Daily Hive has reached out to the company for comment but has not yet received a response.

Under BC’s Motor Vehicle Act, it is illegal in BC to transport unsecured pets in the back of a pickup truck.

“Dogs that ride in the back of pickup trucks are particularly at risk,” the Insurance Corporation of BC says on its website. “The safest way to transport your dog or other pet is to leave them in your vehicle.”

Daily Hive has also reached out to the BC SPCA for comment but has yet to receive a response.

“If you attend an event like this, leave your animals at home. Don’t drag her along,’ Bring said. “Their hearing is so much more sensitive than ours. They don’t want to be there.”