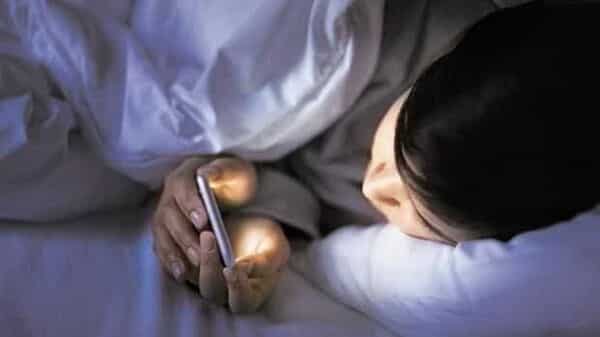 A good night’s sleep is important for your health. Chronic sleep troubles can lead to cognitive impairments and increase the risk of stroke and heart attack. And getting enough rest is a huge problem for teens, who are facing a sleep crisis due to factors including nighttime technology use, busy schedules and heavy homework loads. American adults also have trouble sleeping, with 70% of adults reporting they get insufficient sleep at least one night a month, according to the American Sleep Apnea Association.

Much ado has been made about the blue light our devices emit, but the ways in which tech hijacks our sleep go far deeper than that. It’s the content we see that has the biggest impact on our slumber, sleep experts say.

So what should we do about it? Sure, you could leave your phone in another room at night, but that might not be feasible for adults who want to be reached in an emergency. The simplest fix is ​​to eliminate the temptation to scroll altogether. Tools from tech companies can help, including new features from TikTok and Instagram, two often-cited sources of nighttime distraction.

If we come across alarming news, a scary movie or an annoying work email right before bed or in the middle of the night, the stress hormone cortisol can rise. A spike in cortisol provides an energy boost by moving glucose from a stored state in the body to an active state. “It’s like eating a candy bar,” says Jamie Zeitzer, co-director of the Stanford Center for Sleep and Circadian Sciences. Coming down from that energy rush can be difficult.

Positive content can be just as disruptive because it can increase the amount of dopamine or norepinephrine in the brain, two neurotransmitters Dr. Zeitzer says can excite the thalamus—the brain’s information-relay center—and disrupt the brain-wave oscillations needed for sleep.

Fretting about not sleeping can make things even worse. When we worry about not being able to go back to sleep, Dr. Zeitzer explains, we actually can’t go back to sleep because that worry is causing more cortisol to be released.

If any of this sounds familiar, don’t despair. Sleep and digital-media experts suggest trying these things:

Know your triggers. Not all screen activities are bad for sleep. Start by assessing what stresses you out or excites you when you look at your phone—and what helps you calm down. You should also be more aware of the time you’re spending on your device. We tend to lose track of time when we’re on our phones, which can eat into the seven hours of nightly sleep doctors say adults need (teens need eight to 10 hours).

Reconfigure your habits. Once you identify which screen-related activities rile you up, shift those activities earlier in the evening and do more relaxing activities closer to bedtime, says Nitun Verma, a spokesman for the American Academy of Sleep Medicine. Telling patients not to use screens an hour or two before bed is too jarring for some people, he says, and ends up being unsustainable. Instead, he advises people to taper their level of screen-induced emotion and excitement over the course of an evening so it’s “like landing a plane.”

make a list If you’re one to worry at night about what lies ahead the next day, some sleep experts suggest making a to-do list before bed, so you don’t keep yourself awake making mental lists.You don’t have to get out paper and pen: The notes app on your phone makes it easy, or try one of the note-taking apps I mentioned here.

Use tech to combat tech. You might soon be able to curb late-night TikTok scrolling. The video-sharing app, owned by ByteDance Ltd., is testing a new sleep-reminders feature. When you designate a bedtime in TikTok, the app will mute push notifications for the next seven hours and nudge you to close it. TikTok in 2021 began disabling notifications during nighttime hours for teens.

Thanks to a new feature introduced this week, Instagram users have the ability to set times in the app when they don’t want to be bothered. When Quiet Mode is enabled, you won’t receive notifications, and the app owned by Meta Platforms Inc. will send an auto-reply to anyone who DMs you to let them know you’re offline. The app will prompt teens to turn on Quiet Mode when they’re on Instagram between midnight and 4 am

There are even more choices on the phones themselves.

You can turn on Do Not Disturb on an iPhone or an Android phone during the hours you choose, during which time you can allow calls or notifications only from certain people or apps. In the iPhone’s Sleep Focus setting, you can set a sleep goal and create bedtime reminders as well as enable Sleep Screen, which dims your lock screen at bedtime.

iPhones also have a Wind Down feature while Android phones have Bedtime Mode, both of which silence your phones at a time of your choosing.

Only glance at the time. Many of us tap our phone screens to check the time in the middle of the night. That can tempt us to unlock our phones and scroll. If you’ve followed the other steps listed here, you should be able to resist. You can also buy an alarm clock just for that purpose.

Create a family tech plan. Leaving your phone outside the bedroom might not be practical for many adults, but I advise parents to keep all devices out of kids’ bedrooms. Andrea Davis, founder of Better Screen Time, a company that educates families about healthy digital habits, suggests parents create a tech plan with their kids, which spells out when, where and how devices can be used. She says parents should follow the rules, too. She didn’t trust herself not to look at her phone while in bed, so she agreed, along with her children, to charge her phone in another room at night. Her husband keeps his phone in the bedroom in case of an emergency.

Restart your sleep routine. If you still wake up in the middle of the night and find yourself ruminating, don’t continue to toss and turn, says Vijay Ramanan, a neurologist at the Mayo Clinic. He suggests getting up for 15 minutes and restarting the routine that helped you fall asleep in the first place. Just turn to your phone to find a soothing meditation, audiobook or podcast.