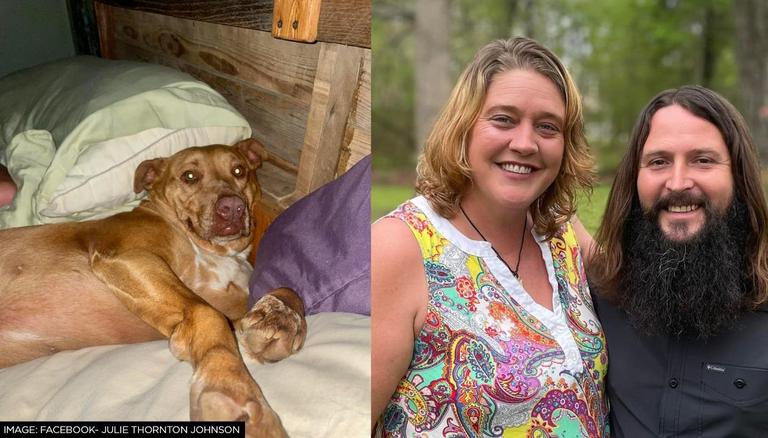 To a strange surprise, a couple in the United States woke up to find a strange dog curled up in bed asleep with them. The couple took to Facebook to explain the incident and launched an initiative to identify the owner of the dog.

The couple who live in the US, Jimmy and Julie Johnson took to Facebook and informed that their unexpected guest wandered in through a back door that was accidentally left open. “I rolled over on my side of the bed, and said, ‘No, no, no that’s not our dog,'” said Ms Johnson recollecting how she found the dog when she woke up. The dog joined the couple for the night.

As per the Independent, Julie Johnson said that she took to social media after spotting the dog nestled comfortably in her bed. Sharing a missing dog message, someone then recognized the dog as ‘Nala’. “We got a Facebook message saying, ‘Hey, that’s my dog. I’ll be there in a few minutes, what’s your address?’” she added. Also, Ms. Johnson said that the owner of the dog shared the pictures of the dog as proof. “She sent me Christmas pictures and all sorts of photos with her dogs,” she added.

Moreover, Julie Johnson identified that the dog traveled two miles before deciding to settle down with them for the night. “I was still lying in bed and snuggling with Nala when her mom walked into the room,” said Jimmy Johnson. Meanwhile, the dog’s owner took to Facebook to share details of her dog’s adventure. “Our overly friendly pup, Nala, has hit a record for ignoring personal space and added yet another trick to her long list of Houdini acts. She slipped her collar yesterday while being walked, ran down the street to a neighbor’s house, somehow managed to get IN their house, and climbed into bed with them in the middle of the night,” wrote Cris Hawkins.

Netizens say, ‘This is hilarious’

The post has grabbed the attention of many on the internet and has garnered around 2.6K reactions accompanied by several comments. The post also prompted many to express their views, “She looks pretty cozy”, a user expressed. The second user wrote, “I am dying over here laughing! I get errant chipmunks and lizards but never a big dog!”. The third user wrote, “Funniest post I’ve ever seen. This should go viral”.