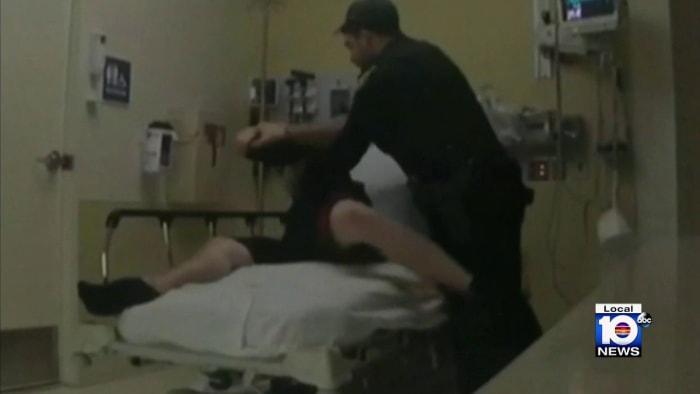 Sobrino, 24, is charged with one count of misdemeanor battery for punching David O’Connell, an inmate who was handcuffed to a hospital bed at Broward Health North, according to prosecutors.

“I was defending myself,” O’Connell said.

According to prosecutors, Sobrino confronted O’Connell at a Walmart in Pompano Beach after witnesses said the man tried to fight an employee at the store.

O’Connell was arrested for resisting without violence and was taken to the hospital to be evaluated for injuries.

According to a letter sent in April by prosecutors to Sheriff Gregory Tony, O’Connell told Sobrino he did not want medical attention, yet he was still placed in an examination room and handcuffed to a bed.

The attorneys said O’Connell again waived medical attention when he was seen by medical staff and told them he did not want to wait for a doctor, but he remained handcuffed to the bed and a nurse collected his vital signs and preliminary information.

***WARNING: Obscene language is used in the video that some viewers may find offensive***

Sobrino is heard in the bodycam footage telling O’Connell it is the agency’s policy to take suspects to a hospital when they are injured and he would have to tell the doctor that he is waiving medical attention once the doctor sees him.

According to the letter, O’Connell told the nurse he needed to urinate and the nurse provided him with a handheld urinal and left the room.

Sobrino stayed in the room as O’Connell knelt in his bed to use the urinal and did not provide him any assistance, although O’Connell was still handcuffed, the attorneys said.

The bodycam footage shows O’Connell repositioning himself on the bed to apparently avoid some urine that had spilled.

O’Connell is heard in the video telling the deputy he “doesn’t want to be here” and “wants to sign out.” Sobrino is seen in the video closing the door to the exam room and telling O’Connell to “Shut up and sit down.”

O’Connell seems to taunt the deputy, repeatedly telling him, “F*** you,” and asking him, “What, you’re going to beat my a** again?”

“What, you think you’re all big now because you’re af***ing cop? F*** you,” O’Connell is heard telling Sobrino.

Sobrino then appears to throw O’Connell’s legs on the bed, punch him in the face and twist his arm behind his back.

The Broward Sheriff’s Office opened an internal investigation into the incident after being notified about it in April.

If convicted, Sobrino faces a maximum punishment of a year in jail. Sobrino has been employed by the Sheriff’s Office since Jan. 12, 2015.