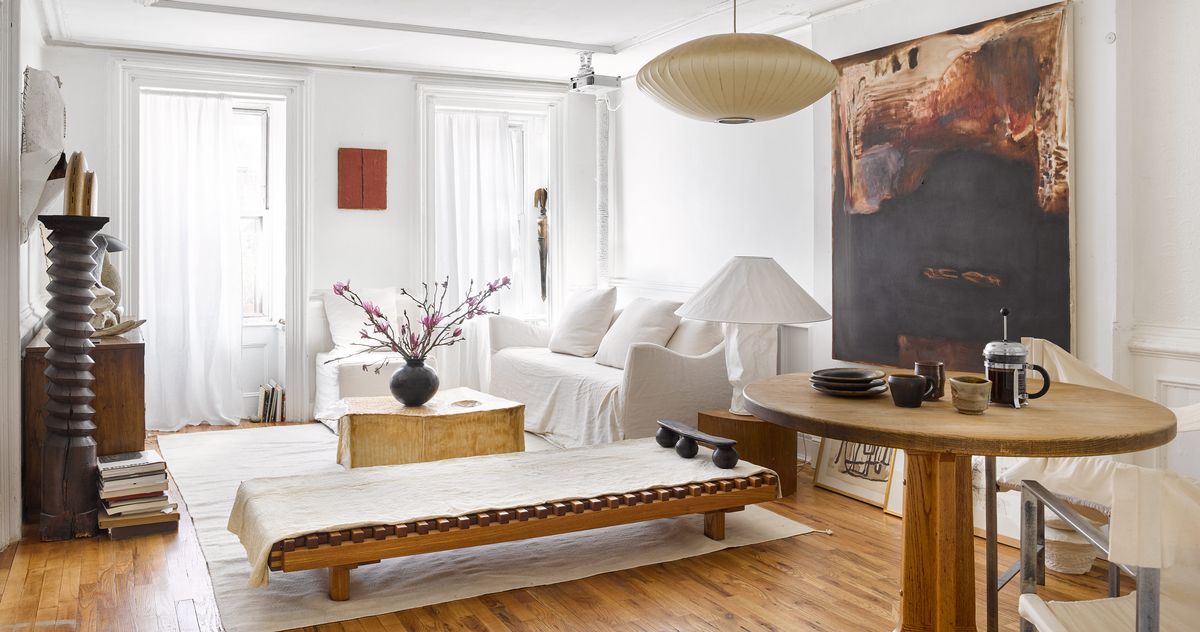 The Living Room: The daybed is Pierre Chapo from Magan H. The headrest is by Minjae Kim. “I saw that painting” — at right, by her friend Liza Lacroix — “in a dilapidated ornate mansion in Mexico City.” The couch is custom in collaboration with Olivia Stutz Design.
Photo: Annie Schlechter

It’s the first time that I’ve lived by myself, and it was fun to be actually making all the choices of what was in the space,” says the sculptor and ceramicist Simone Bodmer-Turner of her garden-level Bedford-Stuyvesant rental. She had originally moved in here with an ex. After they broke up, she took her time reimagining the apartment with her own things. “I wanted to slowly bring in pieces as I could afford them.” Now, the furniture and art are mostly from artist and designer friends.

There’s a Pierre Chapo daybed — “my first investment” — which she loves because “the smart design allows it to expand into a full bed for friends and family to stay while in town.” The dining table belonged to her parents — “It was our kitchen table growing up” — and originally came from a long-gone mid-century shop in Cambridge, Massachusetts. She’s especially proud of the kitchen. “When I moved in, there were all these Ikea cabinets and countertops,” she says. Inspired by a Charlotte Perriand kitchen she’d seen in a book, she installed a “curvy cherry countertop and a floating table with a little cubby for sitting,” she says, with a matching cherry backsplash.

Bodmer-Turner grew up in Berkeley, California, before her family moved east to Massachusetts. In school, she studied literature with a focus on travel writing and art. But it took a while for her to get back to the art part. That came after a taste of farming and cooking — “my other big love,” she says. In 2013, she started working for the farm-to-table sustainable-food-delivery start-up Good Eggs. During her time at the start-up, Bodmer-Turner began taking classes in ceramics and worked at Choplet, Gasworks, and Sculpture Space before getting her own studio near the Navy Yard in 2018. Which turned into another career. This year, in her first solo show at Matter Projects, which ran from February through April, she exhibited 25 pieces, many of them quite large, that included furniture and lighting. “I built my studio around a design line I called the Permanent Collection” — which she describes as a “seasonless line of ceramic vases that draw on ancient ceremonial vessels and modern shapes” of architecture and design — “that is my bread-and- butter group of vessels.”

That line fostered wholesale accounts that blossomed during the pandemic with people focused on their homes. The show at Matter was larger than what she had been making, and “the scale of the work was not something that made sense for such a small studio,” so she discontinued wholesale and is now delivering pieces directly to her collectors. She is also focusing on her personal work of making sculpture and furniture pieces in the minimal space of her studio, keeping her home base filled with the things that inspire her.

Bodmer-Turner With Mort: Mort is a mix of cattle dog, pit bull, and Labrador. “I adopted him ten months ago,” she says. “He was found in a brickyard in Texas and shuttled up to a shelter in Pennsylvania.” The table belonged to her parents.

The Kitchen: “The counter and backsplash was installed by Cain Cain Studio. Bodmer-Turner says, “We added shelving and an original traditional butcher block that I replaced with this curvy Cherry countertop when the butcher block started to split.”

The cantilevered tabletop was designed by Bodmer-Turner and made by Cain Cain Studio.

“In the alcove there is a vessel that Bodmer-Turner describes as “an original hand-built Single Stem from when I was making them all by hand that I kept. There are other objects found from flea markets and hikes.” The canvas semi circular seat around the dining table is by Lukas Gschwandtner from Maniera Brussels.

The credenza in the living room was there when Bodmer-Turner moved in. The ceramic on rocking legs is a piece that Bodmer-Turner made during a residency in Japan in 2019. The Sawfish teeth were found in an antique store. “I just liked the shape.” The rocks are from a stoneyard of a friend who is a stonemason. “We nerd out on rocks there.”

The Bedroom: Sarah Ellison designed the bed. The bookshelves were designed and installed in collaboration with Cain Cain Studio. The Mario Bellini-inspired daybed was a custom piece with Olivia Stutz Design, and the painting above the bed is by Hanna Eshel from Patrick Parrish.

Thank you for subscribing and supporting our journalism. If you prefer to read in print, you can also find this article in the May 9, 2022, issue of
new York magazines.

Want more stories like this one? Subscribe now to support our journalism and get unlimited access to our coverage. If you prefer to read in print, you can also find this article in the May 9, 2022, issue of
new York magazines.

Design editor Wendy Goodman takes you inside the city’s most exciting homes and design studios.

By submitting your email, you agree to our Terms and Privacy Notice and to receive email correspondence from us.