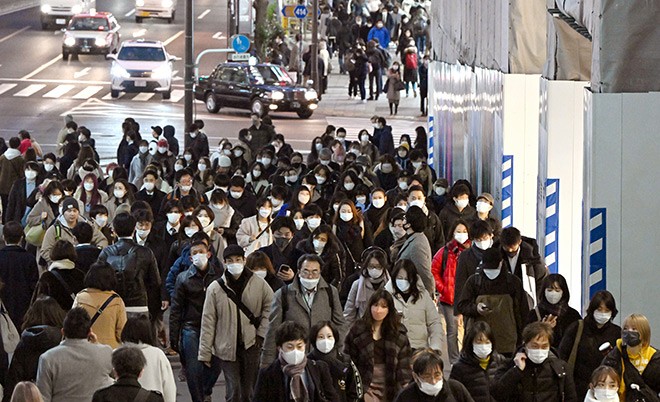 The Tokyo metropolitan government will use hospital bed occupancy as a key barometer on whether to ask the central government to impose tougher measures against the Omicron variant of the novel coronavirus.

“Stop infections, but don’t stop society. We must do both,” Tokyo Governor Yuriko Koike said at a news conference following the city government’s COVID-19 surveillance meeting on Jan. 13.

The new policy will emphasize a balance between infection prevention measures and economic activities.

The metropolitan government will ask the central government for pre-emergency measures when the hospital bed utilization rate in the capital reaches 20 percent. It will request a state of emergency if the ratio reaches 50 percent.

On January 13, the occupancy rate of hospital beds in the capital was 15.1 percent.

Earlier, the metropolitan government said it would ask bars and restaurants to limit customer numbers if the hospital bed utilization rate was expected to hit 20 percent three weeks later.

Those farms would be asked to reduce their hours of operation if the daily average of new infections surpassed 700 over a week.

The average number of newly infected people per day recently exceeded the 700 mark.

But metro government officials said those barometers were discontinued in response to the Delta variant.

The impact of the Omicron variant on hospital bed occupancy is still unknown, and officials are struggling to predict occupancy three weeks later.

The capital recorded 3,124 new cases of infection on January 13, more than 3,000 for the first time since September 2.

At the Jan. 13 meeting, experts said that “social activities in Tokyo may need to be halted,” noting that the daily average of new cases of infection has increased about eight-fold from the previous week due to the Omicron variant.

If this pace continues, the number of new infections per day will reach 9,500 on January 20, the experts said.

As of January 13, COVID-19 patients occupied 1,056 of Tokyo’s 6,919 secured hospital beds. Four of the patients had severe symptoms.

“It’s possible that there could be a shortage of medical resources quickly,” Koike said.

In Osaka Prefecture, 2,452 new cases of infection were confirmed on January 13, about five times as many as on Thursday.

But the number of patients who developed severe symptoms and were hospitalized was just six, and only 1 percent of hospital beds for such patients were occupied.

There were 706 patients with mild or moderate symptoms, occupying 23 percent of the hospital beds in this category.

Osaka Governor Hirofumi Yoshimura remains reluctant to urge the central government to impose precautionary measures or a state of emergency in the prefecture.

“The number of critically ill patients, the rate of severe symptoms and the availability of hospital beds are the most important factors,” Yoshimura said.

He has yet to explain the barometer to demand stricter measures from the central government.

(This article was written by Shin Kasahara and Yuki Kubota.)