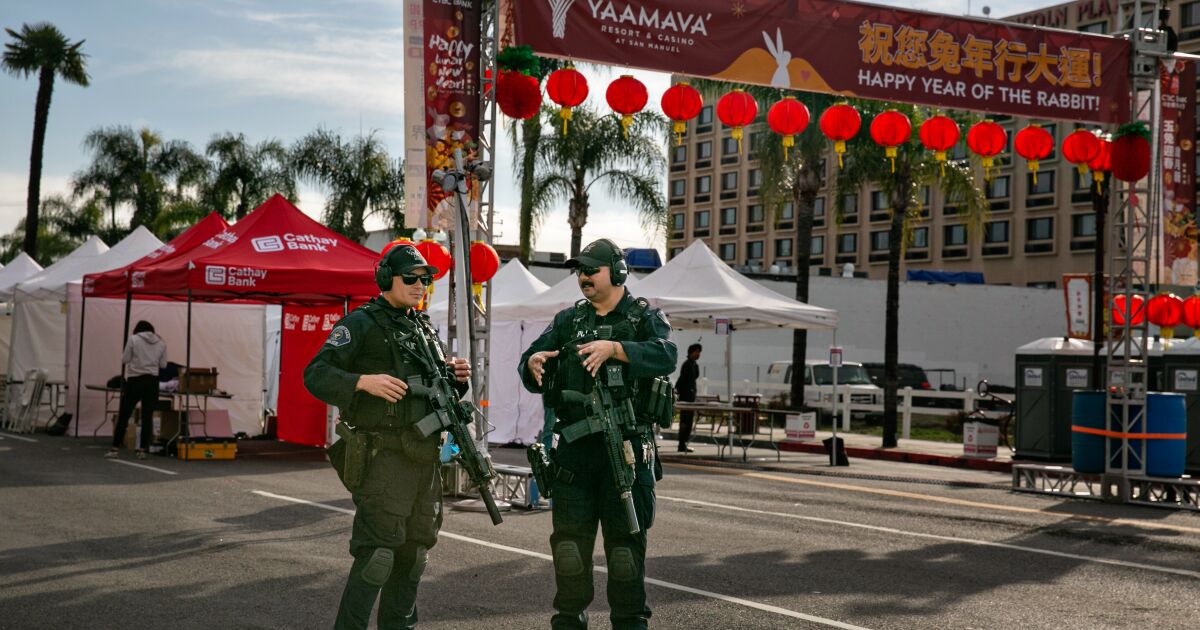 Hello, it’s Monday, Jan 23, and here are the stories you shouldn’t miss today:

A deadly mass shooting inside a Monterey Park dance studio ended in Torrance on Sunday, where the suspected gunman died of a self-inflicted gunshot wound in a strip mall parking lot, law enforcement sources said.

The manhunt began after the shooter opened fire inside Star Ballroom Dance Studio on West Garvey Avenue around 10:20 pm Saturday, killing 10 people and injuring 10 others.

The mass shooting is one of California’s worst in recent memory. The violence came as an iconic city in the history of Asian immigration to the United States celebrated Lunar New Year. Police said the shooter’s motive remains unclear, but the killings have sent shock waves of anxiety through a community already contending rising violence and incidents of bias.

Voters in LA City Councilman Kevin de León’s district have little confidence in him, and as a scandal involving racist comments continues to dog him, a majority want him to resign, a new Los Angeles Times poll shows.

The poll paints a grim political picture for De León, who has adamantly refused to step down, despite a chorus of calls to go that has reached from protesters at City Council meetings to President Biden.

Sign up for our California Politics newsletter to get the best of The Times’ state politics reporting and the latest action in Sacramento.

La Niña signaled a dry winter. So why did California get so much rain?

For decades, two climate patterns in the Pacific Ocean have loomed large in predicting weather in California and other parts of the globe. El Niño — a warming of sea-surface temperatures in the tropical Pacific — seemed synonymous with wet winters for Southern California, while La Niña was a heralder of drought.

But the would-be model didn’t hold up this winter. Despite La Niña’s presence, a robust series of 10 storms brought impressive precipitation across California. So what happened? Scientists say it’s all about probability.

Everyone hates Ticketmaster. Is everyone wrong?

Fans, artists and government regulators have lambasted Ticketmaster for 30 years. But after tech failures shut out millions of fans from the on-sale for Taylor Swift’s “Eras” tour in November, the ticketing firm came under fire from all sides.

Yet the actual role that Ticketmaster plays in live music is widely misunderstood. In more than a dozen interviews with former Ticketmaster executives, artist managers, economists, lawmakers, antitrust experts, fans and industry insiders, many agreed that Ticketmaster is enormous and largely unaccountable to fans. But, they said, it is also a mostly effective business with few peers capable of operating at its scale.

Check out “The Times” podcast for essential news and more.

These days, waking up to current events can be, well, daunting. If you’re seeking a more balanced news diet, “The Times” podcast is for you. Gustavo Arellano, along with a diverse set of reporters from the award-winning LA Times newsroom, delivers the most interesting stories from the Los Angeles Times every Monday, Wednesday and Friday. Listen and subscribe wherever you get your podcasts.

OUR MUST READS FROM THE WEEKEND

Storm flooding compounds misery for California farms and workers. In a continuing series of environmental crises, farmworkers have been contending with flooded homes, damaged cars and reduced or lost work hours since atmospheric river storms pummeled the state, destroying crops at farms.

How a massacre in a small town named Goshen shocked the country. The slaying of six people, including an infant, highlights how little-known rural enclaves in the San Joaquin Valley have become some of the most violent places in California.

LAPD ban of ‘thin blue line’ flags is the latest salvo in a culture war. In a departmentwide email, Chief Michel Moore said the flag’s original meaning of support for police had been overshadowed when it began appearing at rallies for far-right extremist groups.

Fewer Medi-Cal patients got crucial treatment for hepatitis C amid the pandemic. The slow-moving virus can now be cured in most cases. Yet the number of Medi-Cal patients getting the medications annually plunged more than 40% between fiscal years 2018-19 and 2020-21.

Time’s Up to halt operations and shift resources to legal fund. The now-embattled anti-harassment organization, founded with fanfare during the early days of the #MeToo reckoning against sexual misconduct, is ceasing operations, at least in its current form.

Violent protests erupt in downtown Atlanta over killing of activist. A protest turned violent Saturday night in downtown Atlanta in the wake of last week’s killing by law enforcement officers of an environmental activist who had shot a state trooper, according to officials.

The Justice Department is now investigating Abbott baby formula plans. The factory’s closure in February 2022 was a key cause of a nationwide baby formula shortage that forced parents to seek formula from food banks, friends and doctor’s offices before production restarted in June.

HOLLYWOOD AND THE ARTS

Brandon Cronenberg breaks down ‘Infinity Pool.’ His latest movie may be the most disturbing and unsettling film at Sundance this year, forcing viewers to confront what they might actually be capable of — all told in a hallucinatory, brain-melting, head-spinning style.

Actors and creators question move to bring criminal charges against Alec Baldwin. “We are very concerned about the precedent this might set,” said Duncan Crabtree-Ireland, national executive director of SAG-AFTRA. “Actors are not trained to be firearms experts.”

Wondering what happens to all those cars destroyed by California’s floods? A complex ecosystem of insurance companies, auction houses, car dealers and others will process these soggy automotive casualties. Many will eventually wind up for sale again.

Konbi, home to the best egg salad sandwich in LA, to close both locations. The celebrated Japanese cafe and bakery closed its Echo Park and newly opened Culver City restaurants over the weekend, citing high costs and low business.

His long wonderful life is an inspiration, but aging means compromise, and it’s expensive. “I don’t know if I’d have the courage or desire to last into triple digits. The privilege of aging does not come without compromise and loss, and I doubt I’d be very good at either,” writes columnist Steve Lopez.

Op-Ed: 50 years post-Roe, who can predict what US abortion access will look like in another 50? Few could have predicted what the following 50 years would look like in January 1973. The same is true today. But there is one thing we can be sure of: The fight for reproductive rights and justice is not about to end, writes UC Davis School of Law professor Mary Ziegler.

Get our free daily crossword puzzle, sudoku, word search and arcade games in our new game center at latimes.com/games.

Scoring woes burn UCLA at Arizona. Here are five ways the Bruins can fix it. No. 5 UCLA’s 14-game win streak ended with the 58-52 loss at No. 11Arizona. But the Bruins can address their scoring problems.

Unraveling the Lakers’ trade deadline dilemmas: Who might be coming to LA? There’s a bit of healthy impatience in certain corners of the Lakers’ locker room as the team moved past the halfway point of the season without making any notable roster moves. Will that change?

Bill says he had to try it — and he agrees. Read his write-up here (and sign up for his newsletter, Tasting Notes, here).

50 years ago this week, the Supreme Court ruled that women had a constitutional right to abortion. On Jan. 22, 1973, the court decided on a challenge to laws in Georgia and Texas that sought to ban abortions except when the life of the mother was in danger or, in Georgia’s case, if the fetus suffered a major medical issue or had been conceived through sexual assault. The ruling didn’t ban all abortion restrictions, but did set up legal guidelines that limited future restrictions on abortion.

It was also not the first major case to address the issue. Last year, a California couple told The Times about their 1966 abortion and the ensuing legal battle that helped create the framework for the Roe ruling.

In June 2022, the court’s conservative majority overturned Roe in the most significant curtailing of an established constitutional right in the court’s history.

We appreciate that you took the time to read Today’s Headlines! Comments or ideas? Feel free to drop us a note at [email protected]