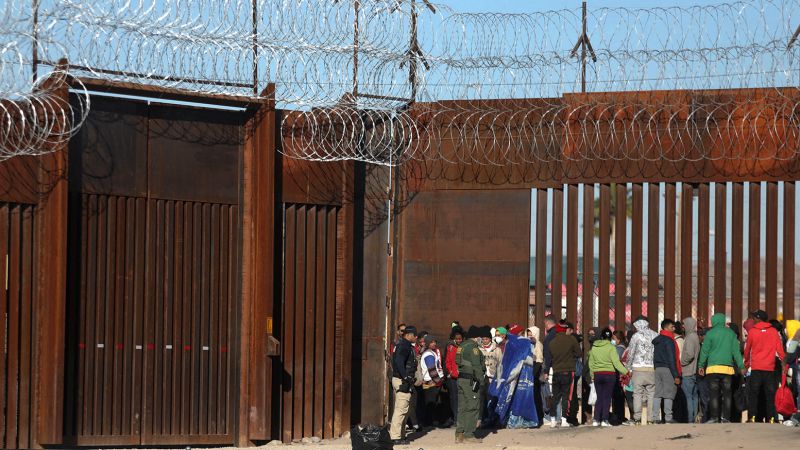 The future for migrants waiting in El Paso, Texas, after crossing the US-Mexico border remains uncertain following the Supreme Court’s Wednesday decision that allows federal officials to continue expelling migrants before they have received an asylum hearing.

“We were hoping for something else,” said Rosanni Rodríguez, a Venezuelan migrant, when told of the court decision.

Rodriguez huddled with her two children on a chilly El Paso sidewalk on Tuesday, wearing a jacket provided by a local church. She and her children attempted to cross into the US once already, but were sent back to Mexico, where they were robbed and picked up by immigration officials as they slept on the ground of a city plaza, she said.

Rodríguez is among the tens of thousands of migrants who have surged to the southern border despite the uncertain future of Title 42, a Trump-era policy which allows US authorities to swiftly return most migrants back across the border.

The controversial order was set to end December 21 but remains in legal limbo after the Supreme Court issued an order Wednesday allowing the policy to remain in effect while legal challenges play out – a process that could stretch out for at least several months.

Several Republican-led states urged the Supreme Court to step in and block a lower court’s decision to terminate the policy. In addition to placing the order’s termination on hold, the court said it would take up the state’s appeal in its upcoming term, which begins in February.

Title 42 was put in place by the Center for Disease Control in the early days of the coronavirus pandemic. Officials at the time argued the public health order was intended to curb the spread of Covid-19, but immigration advocates argued the policy is being used to effectively halt immigration at the US-Mexico border.

Dylan Corbett, the executive director of Hope Border Institute that assists with running some of El Paso’s shelters, warned Tuesday that he expects the Supreme Court decision “will extend the bottleneck at the border, create unsustainable pressure on border enforcement and lead to more deaths. ”

Officials expect that lifting Title 42 will trigger an influx of migrants to the US-Mexico border. Even with the policy still in place, however, many migrants are undeterred, some choosing to cross the border illegally while others wait in crowded shelters, makeshift encampments or in the streets of Mexican border towns.

At least 22,000 migrants are staying in the Mexican border cities of Tijuana, Reynosa and Matamoros, city officials and advocates told CNN on Monday.

Pastor Timothy Perea, a lifelong El Paso resident who is volunteering to help arriving migrants said he expects to see more attempting the border crossing. “Brace yourself. It’s coming,” he said. “It’s a wave of people seeking a better life.”

El Paso has become a focal point in the growing humanitarian crisis at the border with as many as 2,500 migrants recently arriving from Mexico each day, according to city Mayor Oscar Leeser. City officials have declared a state of emergency as the community has become overwhelmed with the continued flow of asylum-seekers.

While Title 42 still remains in effect as legal challenges play out in court, El Paso is developing a plan for handling a potential surge of migrants should Title 42 be terminated, Deputy City Manager Mario D’Agostino said Tuesday.

“Some people talk about 10,000 to 15,000 people waiting in (Ciudad) Juarez to cross over. If those were to come all in a relatively short time frame, space would be difficult. We know transportation would be difficult,” D’Agostino said.

Two vacant schools in the city are being prepared to house migrants, D’Agostino said. One will be ready to use within two days, while the second won’t be modified for a few weeks, he added.

Shelters have also been set up at hotels and some church parishes have volunteered to house migrants, he said. About 1,000 beds have been set up in El Paso’s convention center, which housed more than 480 migrants overnight on Christmas Eve and 420 on Christmas Day, city spokesperson Laura Cruz-Acosta confirmed to CNN.

But the city is unable to accept migrants who don’t have documentation from Customs and Border Protection, according to Cruz-Acosta, who cited state and federal policies, which she said require migrants to have documentation at government-run facilities.

If undocumented migrants show up at the government-run shelters, she said, they will be connected with Customs and Border Protection to turn themselves in or referred to shelters run by NGOs.

Two local NGOs who are accepting undocumented immigrants in their shelters told CNN last week that their facilities are overcrowded, leaving them to close their doors to many seeking shelters even as temperatures dipped dangerously low over the weekend.

Leeser told CNN’s Pamela Paul Tuesday that the situation at the border is “beyond Title 42.”

“We can’t continue to go on in this manner with a broken immigration system that has to be fixed,” the mayor said. “It’s bigger than the United States. I have to work with the UN and countries around us to be able to fix it.”

El Paso has already been granted more that $10 million of federal funding to support its efforts to handle the incoming flood of migrants.