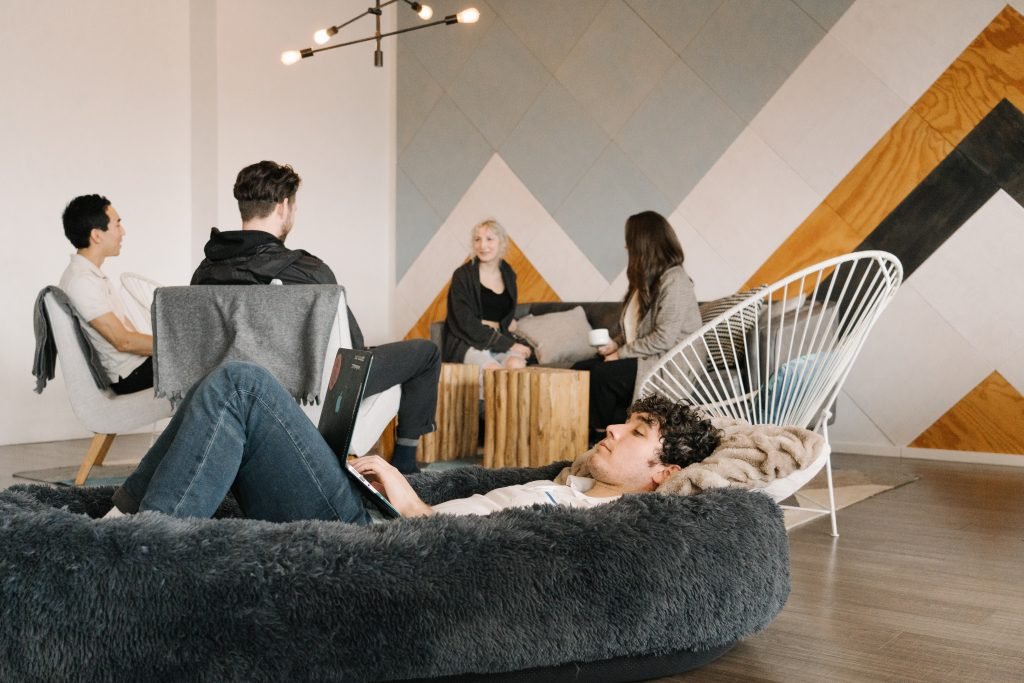 Have you ever looked at your pup cozied up, asleep in their dog bed, and wished you could achieve that level of comfort and relaxation? So did the founders over at Plufl, a new company that makes dog beds for humans. Yep, you read that right. The Plufl is a giant, fuzzy, oval-shaped cushion with a reinforced edge that can only be described as a dog bed scaled up to human size.

How the Plufl Came to Be

Dog beds are exactly what inspired the creators of the Plufl, Noah Silverman and Yukinori Kinoshita, who are fourth year students studying International Economics at the University of British Columbia. The idea for the Plufl first came to Silverman while working at a coffee shop in Vancouver called Great Dane Coffee. While working there, Silverman befriended not only the owners of the coffee shop, but also their dog — the eponymous Great Dane, Lady.

Silverman spent a lot of time hanging out with Lady and lounging in her custom-made, Great Dane-sized dog bed and it got him thinking. “Eventually I realized, dog beds are so comfortable. Why shouldn’t people have one, too?” Silverman told Sleepopolis. He brought the idea to Kinoshita, his classmate and friend, and Plufl was born.

As the pair started prototyping the Plufl, they realized that creating a product that was truly comfortable for napping would take more than just making a traditional dog bed larger. “I went and jumped into the really large Great Dane dog bed and I just hit the floor so hard,” Kinoshita said. A product for humans would need to be much softer and more supportive, so they decided to swap out the traditional dog bed fill for memory foam.

For further human-friendly touches, they also opted for a plush, faux fur outer cover that’s machine washable and reinforced the edge so that a person could rest their head on it like a pillow. Both Silverman and Kinoshita noted that the bolstered edge was one of their favorite features of the product. They also decided to add straps and include a bag with each Plufl, so that it can be easily stored or transported.

The Plufl Makes Its TikTok Debut

After months of getting together on the weekends to work on creating prototypes, sourcing materials, and finding manufacturers, the college students had what seemed like a solid product on their hands. They had plans to launch a Kickstarter campaign to get the funding to start production, but the Plufl hadn’t gotten much attention outside of their supportive friends and family.

But then the pair decided to try TikTok. Silverman and Kinoshita created an account, @weareplufl, and posted their first video on March 9, 2022. Neither had much experience on the app, but knew it was a good place to promote products.

“After a week…not even a week…we just struck absolute gold,” Kinoshita said. The first few videos on the account averaged a few thousand views, but by the end of their first week of posting, Plufl’s TikToks were hitting 10,000 to 20,000 views. Currently, their most viewed TikTok has 8.4 million views.

And the TikToks weren’t just getting views — hundreds of excited comments rolled in, validating Silverman and Kinoshita’s belief that there was a market for the Plufl. The pair also realized that there was a lot to learn from feedback on TikTok. Silverman said that they had learned more about their customer base from a week on TikTok than months of customer discovery work.

For example, Silverman said one group they hadn’t considered as potential customers – but had received many comments from on their TikTok page – was parents of children with autism or ADHD who saw the Plufl as something that could help their child deal with sensory overload .

Another — albeit sillier — example of a customer group the pair discovered was “floor people,” or people who prefer sitting or laying on the floor, even when furniture is available. Silverman and Kinoshita inadvertently tapped into the meme of “floor people,” which has been popularized recently on TikTok. “A lot of comments [on the Plufl TikTok] are about like, ‘Oh, as a floor person, this product is awesome for me,’” Kinoshita said.

Silverman and Kinoshita said they are both “floor people” themselves and part of their motivation to make the Plufl was how much they loved to lay on the floor, although they hadn’t been aware of the meme. For them, it’s been exciting to see just how many other “floor people” are out there — and how many of them want Plufls.

Would You Try the Plufl?

While Silverman and Kinoshita see the Plufl purely as a nap product, many of the commenters on TikTok seem ready to sleep in it — for naps other overnight. Comments like “no cuz the floor and a blanket is so comfy i need this” or “i sleep in my dogs bed more than mine” aren’t hard to find in the comments sections of their TikToks. So we checked in with the experts about the benefits and risks of sleeping on the floor.

“Sleeping on the floor can help improve posture and can also decrease back or neck pain,” Stacy Sutton, PT, DPT told Sleepopolis — particularly “for people who have back pain and feel better in standing versus sitting.” Over time, sleeping on the floor can straighten the spine by lengthening muscles that have become tight, like the neck, chest, and hip flexors, according to Sutton.

For someone who wants to sleep directly on the floor, she recommends using pillows and blankets at first, then removing them gradually to make the switch. However, if you wake with more pain than you started with, she says sleeping on the floor may not be the best solution for you.

dr Ewain Wilson, a North Carolina-based sleep-medicine physician, also noted that any postural benefit of sleeping on the floor shouldn’t outweigh getting a good night’s sleep, as inferior sleep quality is “in itself is damaging to health.”

“An additional drawback from sleeping on the floor would be increased exposure to allergens on the floor, as well as to dirt in general,” Wilson said. He also pointed out that pests are more likely to move along the floor, so it may be of benefit to be raised up off the floor while sleeping in some environments.

However, he told Sleepopolis that sleeping on the floor with some padding can work. So, if you’re already planning a Plufl purchase for full-time sleep, just be sure to check in with your doctor about any of your specific health concerns or conditions. And if you’re following the intended nap-only use, you should be just fine.

What’s Next for the Plufl?

If you’re wondering how, when, and where the Plufl will be available for purchase — echoing the current recurring theme in @weareplufl’s comments section — the team launched a Kickstarter campaign April 12, 2022, where you can place a pre-order for the first batch of Plufls starting at just $299 a piece — a discount on the Plufl’s intended retail value. And you can follow the Plufl’s progress on their website, plufl.com, as well as their Instagram, Facebook, and of course, TikTok.

Get the latest deals, discounts, reviews, and giveaways!

Hey there, I’m Amelia! I’m a Certified Sleep Science Coach and a Staff Writer here at Sleepopolis. I write reviews on sleep products and accessories, including pillows, sheets, bedding, and more! You can also find me on our YouTube channel doing video reviews. I want to help you find the right products to ensure you sleep well, because I know there’s nothing like a good night’s sleep to make me feel better all around. When I’m not reviewing sleep products (or taking a nap!), you can usually find me out on a hike, listening to my favorite podcasts, or attempting to learn how to cook.