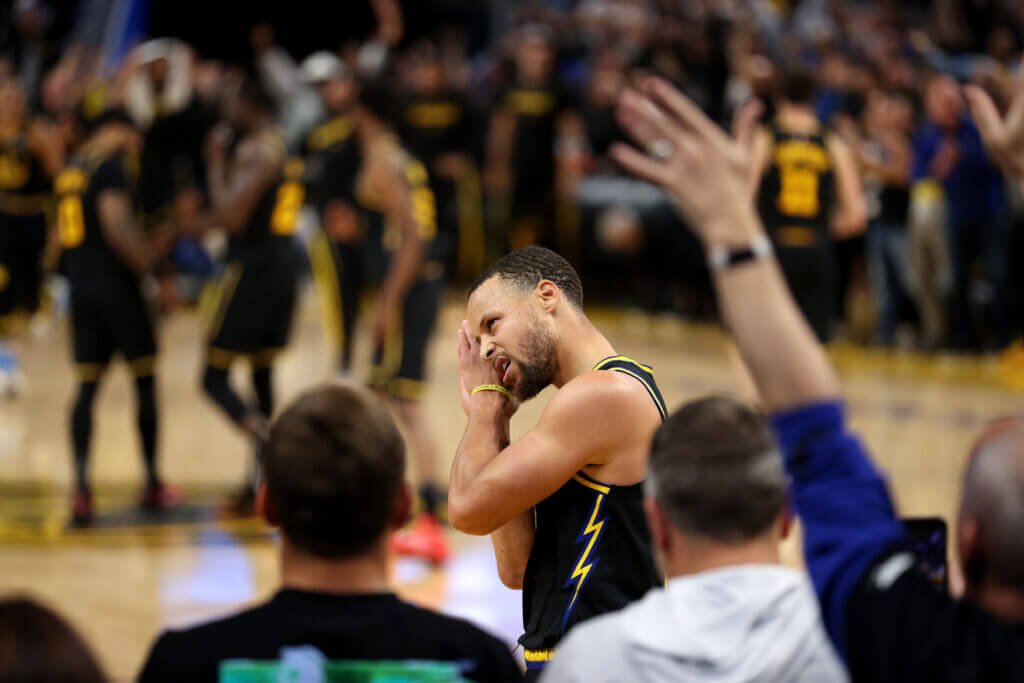 SAN FRANCISCO — First, young Canon Curry gets a bath. Then he gets a book read to him, perhaps “Mr. Happy” or “Mr. Messy” from the Mr Men and Little Miss book series. Then after singing a song — currently the worship song “100 Billion X” by Hillsong United — it’s good night.

That’s how Steph Curry puts his son to bed.

First, he got Aaron Gordon behind him, keeping the Denver forward on his back like a satchel before dropping in a finger roll past Nikola Jokic with 1:33 left. Then, with the Warriors up 97-94, one basket from ending this first-round series, he weaved around Gordon toward the middle. When a second defender, guard Monte Morris, came to help, he went around him too, getting to the other side of the key and gliding in for a left-handed layup. Then, he took out his mouthpiece, turned to the roaring crowd, and rested his head on the pillow of his clasped hands. And it was good night.

That’s how Steph Curry put the nuggets to bed.

“Steph Curry is a special, special player,” Klay Thompson said, “and you’ll probably never see another player like him again.”

The Nuggets’ pride, plus the greatness of Jokic, plus the Warriors’ anxiousness all conspired to put Golden State up against it in Game 5. The blitz expected from the No. 3 seed in the first closeout game at Chase Center instead devolved into a tense nail-biter. The 3-pointers weren’t falling at the usual clip. Sixth-seeded Denver played like a team with nothing to lose—aggressive, physical, pounding the boards, attacking the paint. Harder than nuggets out of the microwave. The warriors found themselves in a dogfight down the stretch, facing a Game 6 in Denver and intense pressure of the suddenly dangerous series.

This was a task for the closer. Curry scored 11 of his 30 points in the fourth quarter to finish off foe No. 1 in these playoffs, 102-98 on Wednesday. He secured the Warriors’ first series victory since the 2019 Western Conference finals by putting his head down and forcing his way to the rim.

At the end of Game 3 in Denver, with the Warriors up 114-111, Curry tucked away the Nuggets with a driving finger roll with 40.8 seconds remaining. He capped the play with his “good night” gesture, head resting on his hands pillow, as the Warriors took a commanding 3-0 lead. A closer look at the possession seems to show Curry made the same gesture, quickly, before the play began, as if he was telling the Warriors’ bench he was about to end it. Then, he put his proverbial head down, and the greatest shooter of all time shifted his determination to forcing his way inside.

When that same urgency surfaced Wednesday, when it was time to end the series and set the warriors up with a few days off before the next round, Curry again turned to his drive.

Denver made this an especially proper approach. Curry was 19-for-47 from 3 (40.4 percent) in the series. He made three in a row in the second half, getting himself going and reminding the nuggets why they’re so terrified of his shooting. Denver countered by pressing him with Gordon, an athletic 6-foot-8 defender whose leaping ability helps him contest Curry’s 3s. But Curry knew as long as Jokic was on the court, and they could pull him out of the lane, there was little resistance past the first line of defense.

“I think I hit those three 3s in the third quarter,” Curry said, “The rest of the time, you try to play that balance of not forcing something early in the shot clock and making them defend. Seeing those driving lanes that — if they are going to try and sell out the 3 and you get a big out there in an uncomfortable position — you can get downhill. …I saw a lot of space.”

What’s critical for the Warriors’ title chances is Curry’s ability to generate offense off the dribble and put pressure on the interior of the defense. His foot injury kept him on the shelf for a month, missing the last stretch of the regular season, and threatened his availability for Game 1 and his viability for the series. But whatever lingers from the sprained ligament in his left foot and accompanying bone bruise was no deterrent when it was time to get to the rim.

This is a critical wrinkle of the Warriors’ offense, especially as teams commit to taking away his 3-pointer. The warriors need a place to turn for tough 2-pointers. Their best place for those is Curry, their chief offensive creator. Even the 3-pointers they get, this season has shown, are much better when they are created by attacking the middle and kicking out. And curry is their best at that.

“He’s got the ball on a string,” Gary Payton II said, “and you’ve got to respect his shot from behind half court. If he pump fakes or hesi, or even look up, you’ve got to respect it. It gets (the defender) up, and he drives the lane and the defense collapses. It opens the floor for everybody.”

He’s more equipped now than ever to be dogged about his drives. The last time the Warriors were in the playoffs in 2019, the league was just starting to defend him like security guards on a Brinks truck, prompted by Toronto’s scheme in the NBA Finals. In the ensuing years, Curry has gotten more prepared to deal with the attention. He’s bulked up, adding muscle to his upper body. His playing weight was formerly 191, 192 pounds faithfully. Now, he plays in the 197- to 200-pound range.

What Denver did to Jordan Poole was get up in him and use stronger players to apply pressure. Poole’s slithery drives were harder to pull off under pressure, his first step negated with hand-checks and bumps. Poole started retreating from his drive or would even lose control of the ball. That’s exactly how teams used to do Curry. They can’t anymore.

“He’s a lot stronger,” said Draymond Green, who remembers the days when defenses could bully Curry. “When he’s driving to the hole, what teams used to do is bump him off his path. Can’t move him anymore. … You have to overreact to the shot. If you’re not pressed up and overreacting to the shot, then he shoots, and good luck. But once he put his head down and drives it, and he’s committed to getting to the hole, he’s strong enough to take those bumps and not get pushed off his path.”

Still, sometimes, Curry can be the ring leader of the Warriors’ 3-point happiness. They often try to shoot their way out of slumps. The long rebounds and quick possessions have a way of feeding the opponent.

Of course, at any moment, the 3s can start falling and the trajectory of the game will change. That’s what happened in the third quarter. Denver had gotten up by 10 points, turning Chase Center into a den of nerves. It was 68-61 when Curry drilled a 3-pointer from the top. The next time down, he hit another one, cutting the deficit to a point and injecting some energy into the venue.

The Warriors were down 83-79 when Curry checked into the game for the first time in the fourth quarter at the 8:48 mark. He had played 29 minutes and would finish at 38 minutes, his highest total of the series. But there would be no more 3s, not from Curry. Payton would hit two big 3s in his career performance. But Curry’s remaining impact would be off the dribble, getting into the lane.

His first possession of the fourth saw him attack Jokic in the pick-and-roll. Jokic had just checked in with Curry and had four fouls. No. 30 dribbled around him. Then, with Jokic on his back, Curry stopped short so Jokic could run into him, drawing the fifth foul on the Denver center and forcing him back to the bench 29 seconds after he came in.

Curry took his last 3-pointer at the 5:46 mark. After that, the switch flipped. He was all about attacking inside the arc. He drew an offensive foul on a midrange stepback against Jokic at the 4:40 mark. With the Warriors up 88-86, Curry put Jokic in the pick-and-roll again, losing Gordon on a screen and pulling up in front of Jokic from 19 feet for a rhythm jumper with 3:31 left. Then inside of two minutes left, the warriors up a bucket, Curry shunned the pick-and-roll. This time, he just took Gordon off the dribble in isolation, scooping it in with Gordon on his back.

So when the Warriors needed one more basket, Curry exactly what to do. With Gordon on him out near half court, he feigned a drive and pulled it back, measuring Gordon’s reaction. He dribbled the ball at the top as the seconds ticked, lulling the nuggets to sleep. Payton came with the screen, but Curry rejected it, dribbling into a trap of Gordon and Jokic. He gave the ball up and got it right back in the right corner. The shot clock was down to five seconds. He had to go.

But he wasn’t taking the stepback jumper you’d expect. He wasn’t looking for the dagger 3 as he often does in these moments. He ran Gordon off a green screen. He faked a pull-up jumper that made Morris jump at him, but Curry kept dribbling left. Across the free-throw line. Down the left side of the key. Gordon and Morris chasing him.

Six left-handed dribbles later, he was at the rim. The last line of defence, Jokic, didn’t even get off the ground. Caught sleeping, as if Curry had on melatonin cologne. Much like Thompson did earlier, Curry laid off the glass smoothly with his left hand. With 29.9 seconds left, and the warriors up five, the nuggets were finished.