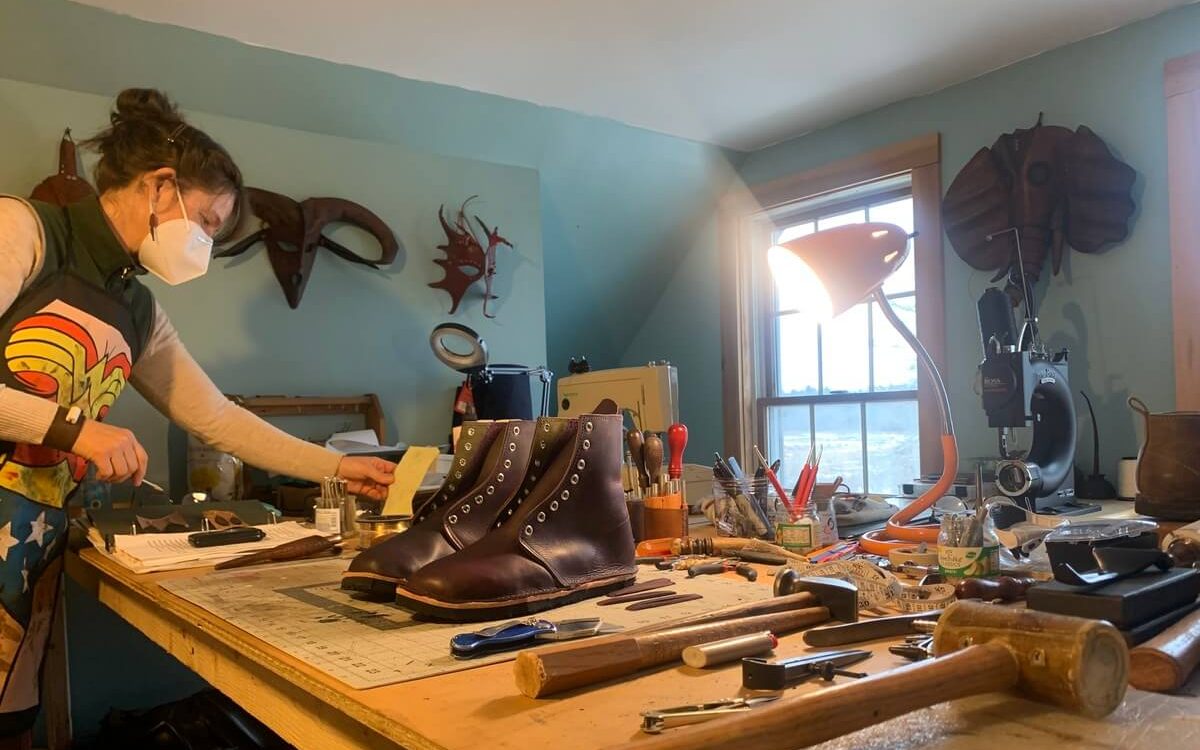 PENOBSCOT, Maine – On a third day, Tammy Bernard would be out pruning trees as a professional arborist and gardener. But Monday’s rain let her spend some time on her passion: working with leather and making boots.

At a time when local shoemakers and cobblers have largely disappeared, Bernard is going against the grain. For the past few years, she’s been one of the few Mainers crafting leather boots.

Late last year she even opened a small workshop for her business Rakkety Tam Leather above the Horsepower Farm store in Penobscot.

Surrounded by three sewing machines, awls and pliers aplenty, she showed off a pair of maroon desert boots – a style of ankle boot popularized by the Clarks shoe company – that she’s been working on. People’s feet are rarely the same size and Bernard tailors each boot to the exact size of a customer’s feet. With this particular pair, she pointed to the toe box and indicated that one of the boots was a quarter inch larger than the other.

“That’s what I love about custom work – to not have one be tight and the other be loose,” she said. “Each fits like it’s supposed to.”

A pair typically takes about 12 hours of labor and costs between $300 and $350 depending on the ankle height.

Although Bernard had a grand opening of the workshop in November, she has been slowly building the business for five years. The boots are her main focus, but she makes several other leather goods, including masks, holsters and knife sheaths. Earrings made from scrap leather have been a big hit with customers and she’s experimenting with moccasins and other footwear.

Before opening her workshop, she worked out of her bedroom, where she’d cut the leather on her bed and often sniped into her comforters. Fortunately, that’s not a problem anymore.

Bernard was inspired to learn leatherwork after going to a renaissance fair while visiting her grandmother in Florida.

“There was a leather mask maker there and it just clicked,” she said.

She started to make her own masks and eventually turned to boots, honing her skills at the Chicago School of Shoemaking and Leather Arts.

Bernard’s constantly trying to get better and learn more about shoemaking. She’s learning how to tan her own hides and plans to study under a cobbler in New Hampshire this summer.

“To me, it’s such a great process to be able to work with one’s hands,” she said. “There’s just nothing like it to me.”

Bernard hopes the bootmaking and leather work will eventually take off and she can dedicate herself to it full time.

“The goal this year is to phase out the gardening and tree work,” she said. “But I haven’t been able to give up my day job quite yet.”

More articles from the BDN