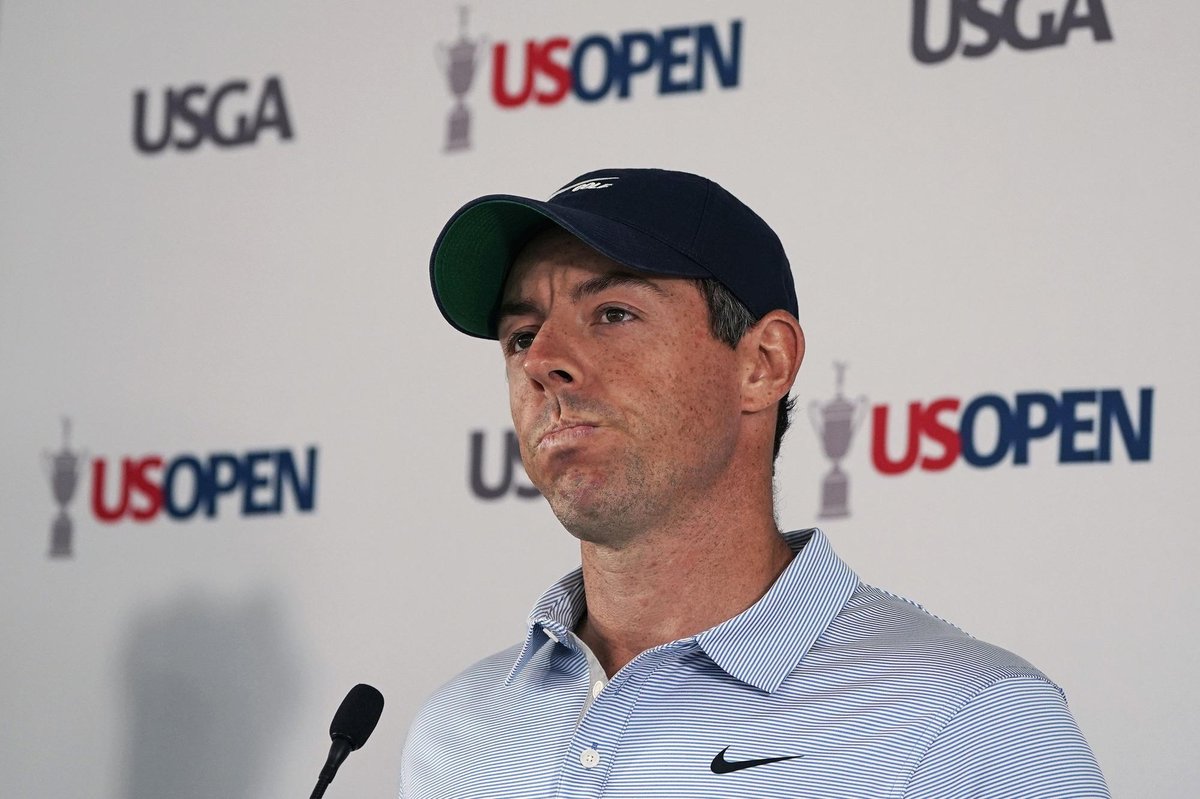 Rory McIlroy, of Northern Ireland, pauses while answering a question regarding the Saudi-funded LIV Golf Invitational series during a media availability ahead of the US Open golf tournament.

McIlroy felt the proposed rebel circuit was “dead in the water” after Dustin Johnson and Bryson DeChambeau committed their futures to the PGA Tour in the wake of Phil Mickelson’s explosive comments about the Tour and Saudi Arabia being published in February.

In an interview with the author of a recently published biography, Mickelson admitted he was fully aware of Saudi Arabia’s “horrible record on human rights”, including the murder of Washington Post reporter Jamal Khashoggi, but was using the threat of a breakaway to “reshape” how the tour operates.

LIV Golf chief executive Greg Norman said the organization’s full league of 14 events had been ready to launch until Mickelson’s comments cost him several sponsors and resulted in some players backing out, with eight 25million US dollar events scheduled this year instead.

Mickelson and Johnson were among the field for the first of those at Centurion Club in Hertfordshire last week, with DeChambeau announcing he had joined LIV Golf during the second round.

“I guess I took a lot of players’ statements at face value. I guess that’s what I got wrong,” McIlroy said ahead of the 122nd US Open at Brookline.

“You had people committed to the PGA Tour, and that’s what the statements were that were put out. People went back on that.

“It’s disappointing. The players that are staying on the PGA Tour feel slighted in some way. If those guys (who have left) thought outside of themselves, they would see this is not the best for everyone.

“My dad said to me a long time ago, once you make your bed, you lie in it, and they’ve made their bed. That’s their decision, and they have to live with that.”

McIlroy and Justin Thomas have emerged as the most amazing advocates of the PGA Tour and, a day after the 54-hole LIV event came to an underwhelming conclusion, they fought out the RBC Canadian Open in a thrilling finish, with McIlroy eventually defending his title in front of a raucous crowd.

It was the 21st PGA Tour victory of McIlroy’s career – one more than Norman – and prompted McIlroy to take a swipe at the Australian which he admitted at Brookline was a “little bit petty”.

But the four-time major winner feels he has a duty to speak out about a subject he feels is “fracturing the game more than it already is”.

“It’s certainly a burden I don’t need but I have very strong opinions on the subject,” McIlroy said. “I think I am providing the thought process for a different view shared by a lot of people.

“The PGA Tour was created by people and tour players that came before us – the likes of Jack Nicklaus, Arnold Palmer…

“They created something and worked hard for something, and I hate to see all the players that came before us and all the hard work that they’ve put in just come out to be nothing.

“Legacy, reputation… at the end of the day that’s all you have. You strip everything away, and you’re left with how you made people feel and what people thought of you. That is important to me.

“The crowds in Canada, LIV is never going to have that, the sense that it means something. What they are doing over there does not mean anything, apart from collecting a ton of money.”