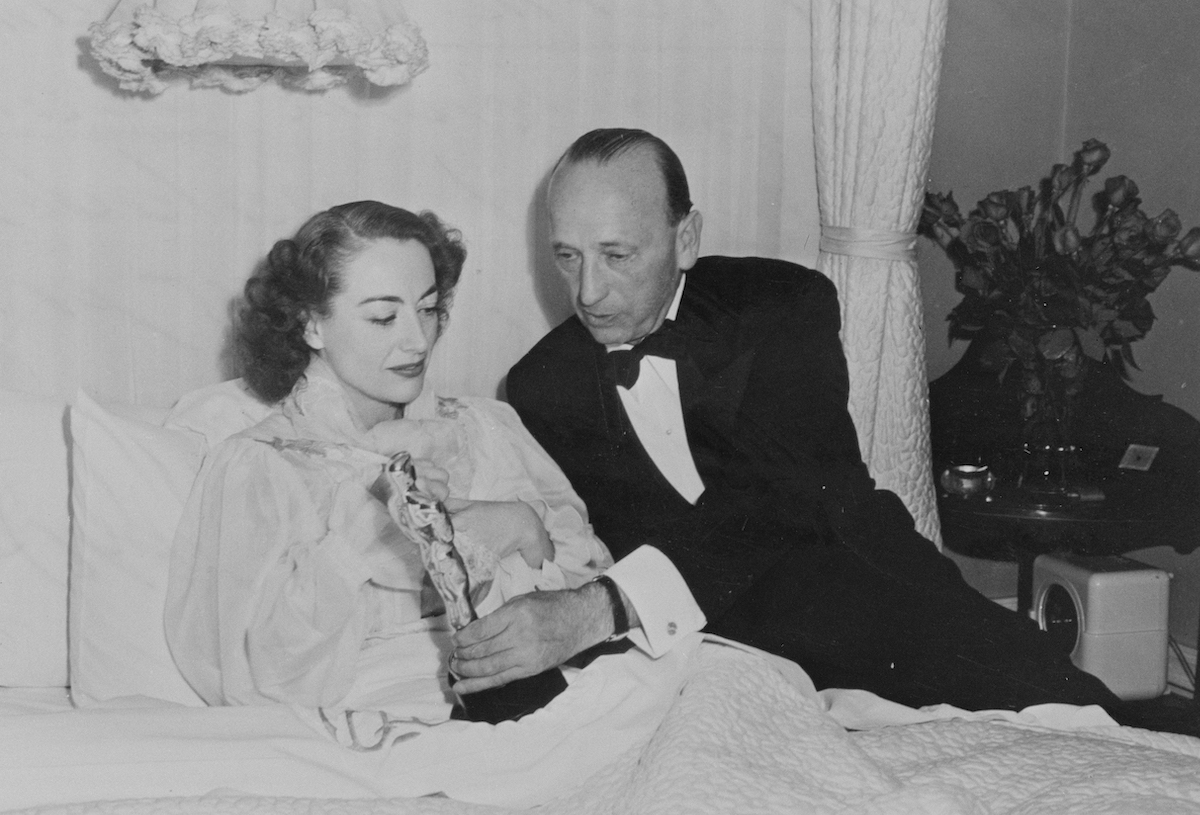 There are some events from the Golden Age of Hollywood that are impossible to picture happening today, and the way that Joan Crawford accepted her Oscar definitely fits that bill. During the 1946 Academy Awards, Crawford wasn’t at the show when she was named the Best Actress winner—that part’s not so odd. But what would likely never happen in today’s Hollywood is that Crawford accepted her award from her bed with her hair and makeup done and reporters at her home to cover it. The stunt was a sensation, bringing Crawford even more attention than she would have received if she’d attended the awards in person.

Crawford’s reasoning as to why she wasn’t at the awards show changed over the years up until her death in 1977. Read on to find out what led to her iconic diva display.

READ THIS NEXT: Cary Grant Clashed With This Co-Star: “Couldn’t Be Married to Her for 24 Hours.”

Crawford won her Oscar for the 1945 movie Mildred Pierce, which was considered a comeback for the star, who got her start in the 1920s. She played the title role in the film noir about a single mother. Crawford went on to receive two more Academy Award nominations: in 1948 for Possessed and in 1953 for Sudden Fearboth also for Best Actress.

As reported by the New York PostCrawford wrote in her 1962 memoir, A Portrait of Joanthat she skipped the Oscars because she was ill.

“On the night of the Awards, I was running a temperature of 104. I’d been suffering with flu for the past week, filming humoresque… Flu coupled with the nervous tension of being eligible for an Oscar had me shaking with chills and fever,” she explained. She also said that she was all ready to go to the show, but her doctor ordered that she stay in bed. ” We feasted on effervescence that night, and I was so overheated, the fever broke,” she wrote.

For more celebrity news delivered right to your inbox, sign up for our daily newsletter.

In another account from Crawford, nerves played a bigger part in her decision.

“I was afraid of losing,” she told biographer Charlotte Chandler (via the New York Post), who published the book Not the Girl Next Door in 2008. Crawford said that she thought Ingrid Bergman what going win for The Bells of St Mary’s. Bergman had already won the previous year for Gaslight.

“The tension is so terrible when you’re sitting there waiting,” Crawford said. “Waiting for Best Actress means sitting there almost the entire evening. You have to look composed and applaud at all the right moments … Then, when you lose, and I was certain I would, you have to sit there through the last awards wearing your best face … I wouldn’t know what part to play after I heard the words that someone else had won, probably Ingrid.”

In the 1980 book Conversations with Joan Crawford by Roy NewquistCrawford said that she did some drinking to cope with her nerves.

“I remember how I felt the night the Awards were presented,” she explained (via the New York Post). “Hopeful, scared, apprehensive, so afraid I wouldn’t remember what I wanted to say, terrified at the thought of looking at those people, almost hoping I wouldn’t get it, but wanting it so badly—no wonder I didn’ t go … I stayed home and fortified myself, probably a little too much, because when the announcement came, and then the press, and sort of a party, I didn’t make much sense at all, even though I wanted to spill over .”

While Crawford claimed that she had legitimate personal reasons for accepting her Oscar the way she did, it’s been theorized that it was all a publicity stunt—something Crawford didn’t shy away from. And inviting press into her bedroom to photograph her holding her award made the actor the biggest story of the night.

“I’m sure she relished it,” Turner Classic Movies’ Dave Karger told the New York Post. “The majority of the talk was about her Best Actress win.” He added, “I don’t think there’s anyone who would have the guts, or maybe the lack of self-awareness, to try any of the stunts that Joan Crawford attempted over the years. She just seemed to have no shame—and no problem showing the industry how badly she wanted the attention.”

Another apparent stunt came at the 1963 Oscars when Crawford accepted Anne Bancroft’s award on her behalf after waging a campaign against her rival, Bette Davis. According to Vanity Fairgossip columnist Hedda Hopper wrote of the night, “When it comes to giving or stealing a show, nobody can top Joan Crawford.”

Nate D. Sanders Auctions, which sold the infamous statuette, included a quote Crawford gave to reporters on the night of her win in the listing: “Whether the Academy voters were giving the Oscar to me, sentimentally, for Mildred or for 200 years of effort, the hell with it—I deserved it.”