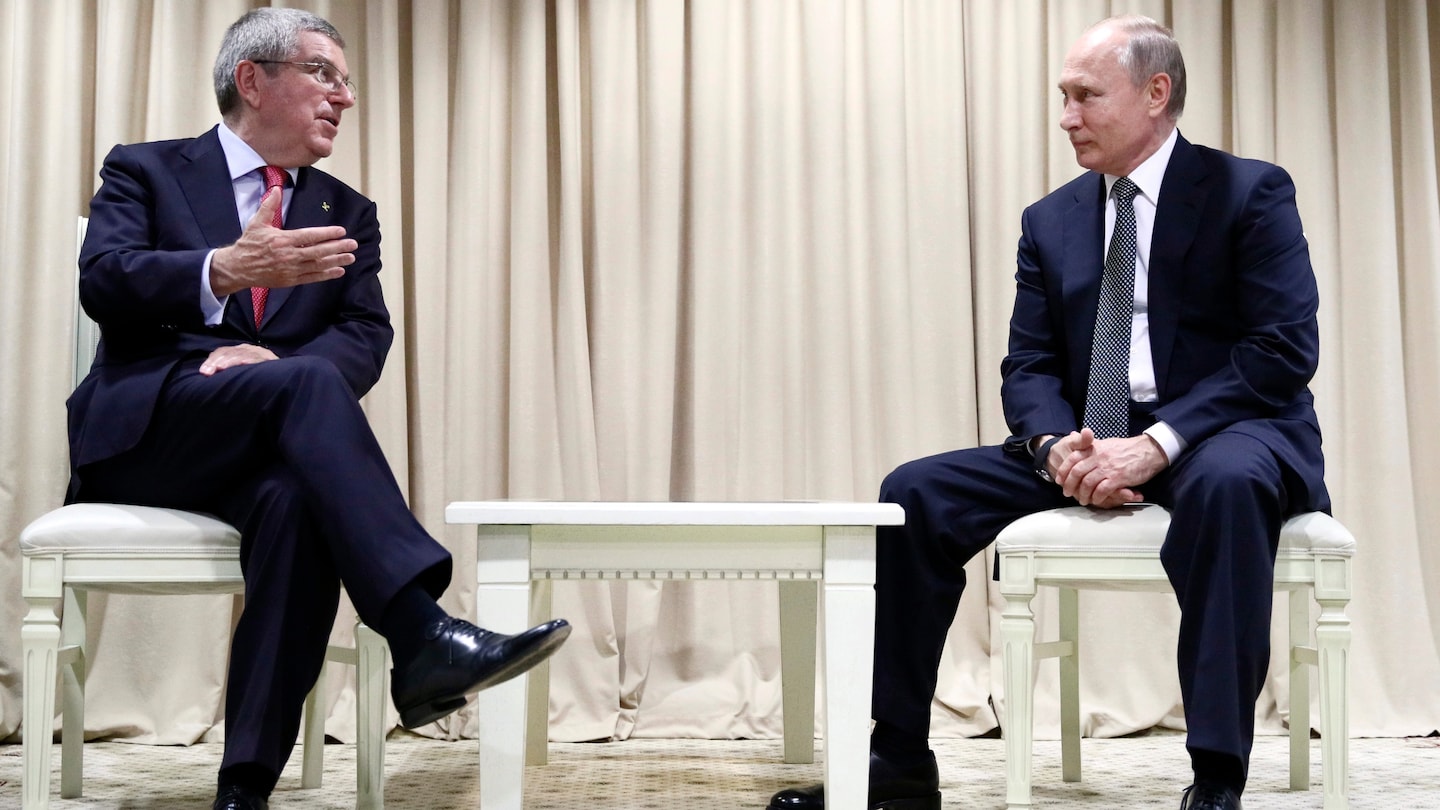 The IOC’s Baron Von Ripper-off of a president, Thomas Bach, has been one of the world’s great lobbyists for Putin and China’s Xi Jinping, and that won’t be forgotten even as the Olympics rotate with relief to Paris in 2024. The new force and coordination of American-led economic sanctions is not a one-off simply aimed at Putin over Ukraine: It’s a whole new doctrine calculated to clean dictators’ dirty money out of institutions and tear the masks off economic collaborators. The architects of this policy are laser-focused on the behavior of companies in every arena — including the Olympic one — that might aid and abet Putin. “You do business in these places at your own peril,” warns Paul Massaro, a congressional adviser on foreign policy who sits on the US Commission on Security and Cooperation in Europe and is a specialist in anti-corruption sanctions.

It used to be that Olympic sponsors merely had to weather a public relations storm as a penalty for engagement with autocrats. That has changed. Now they have massive financial exposure resulting from sanctions isolating Russia. Example: Roughly $1.2 billion of Visa’s annual net revenue comes from Russia and Ukraine. Russia — where wheelbarrows of rubles are now worthless in a dime store.

Then there is the matter of audience recoil from companies that helped contribute to Putin’s war chest. Olympic sponsors, Massaro says, “have absolutely helped prop up the Russian economy and at various times even done the bidding of Putin.” Which raises this question: Can we consider these companies “our own anymore?” Massaro asks.

These are just some of the costs to American sponsors for not bucking the odious leadership of Bach, under whom the Olympics have been the furthest thing from politically or economically neutral. Bach has shown a marked softness on everything from state doping to construction for the Sochi Games. He laughed with Putin over coffee and macarons as corrupt cash flooded into the coffers of Putin allies; murdered opposition leader Boris Nemtsov estimated up to $30 billion was stolen from Sochi by Putin associates. Bach not only lent legitimacy to the proceedings; in 2019 he awarded the IOC’s Trophy of Olympic Values ​​to now-sanctioned Putin oligarch Alisher Usmanov.

It’s no exaggeration to say all this had a significant and nefarious international impact. For one thing, it contributed to Putin’s air of “I can get away with anything I want,” Massaro observes. Putin came to believe that Western business stakes in Russia would prevent serious sanctions or even much pushback on Ukraine. “It’s absolutely connected,” Massaro says. “It’s all part of a pattern of impunity and enabling Putin’s mind-set.”

It’s crucial to recognize the serious and malignant role played by the Olympics, one much broader than merely giving Putin prestige or public relations. The games are part of what Massaro describes as a strategy of “elite capture” through which actors such as Putin and Xi try to co-opt and compromise Western influencers with various forms of financial entanglement. They’re a cog in “transnational networks that are used by the Kremlin, the CCP and other dictators to pursue their foreign policy goals and exert influence.” Just read Massaro’s breathtakingly prescient argument for severe sanctions in Foreign Policy magazine from December.

Bach is now cowering in a conspicuous silence. Although Russian athletes are for the moment banned from international competition, no one believes for a second that Bach will keep Russia from Paris. “I will be surprised if the IOC takes any action that appears to be stringent or judgmental relative to Russia,” says Rick Burton, former chief marketing officer for the US Olympic Committee and now a professor of sport management at Syracuse University. “I imagine they will be hoping — and that’s always bad strategy, hoping — that this will blow over.”

It will not blow over for policymakers for one simple and powerful reason: Taiwan. A similar confrontation with China is looming. And the economics of that will affect American companies on a whole different order of magnitude. According to Bloomberg, 10 of the 12 largest Olympic sponsors — including Intel, Coca-Cola and Procter & Gamble — generate a combined $110 billion per year in revenue in China.

It’s possible that the IOC and its partners will cruise imperviously on to Paris and consumers will experience the usual ramp-up in Olympic spirit, especially if the war in Ukraine ends. But it doesn’t feel that way — it feels as though a tipping point has been reached. The penalties for poor choices will be new and bigger; these revolutionary sanctions make that clear. And as advise policyrs such as Massaro seek a total reset of the landscape for American companies that previously profiteered without worry, those that partner with bad international actors will find themselves in a pressure vise.

At the Winter Games in Beijing, companies were mute and self-gagged, and they saw their branding millions wasted in toxic association with genocide and tanked ad campaigns. And that was just a prelude.

“The risk of being associated with dictators is actually much higher than we thought — that’s the huge takeaway of this,” Massaro says. “The private sector needs to realize this. It’s been a long time coming. We should have realized it 10 years ago, and if you’re not recognizing it now, you’re effectively in league with the enemy and it’s going to hurt your bottom line. … That is the risk of having exposure with dictators.”

There is one way for American companies to unspring this Olympic trap: overtly start stressing values ​​ahead of short-term economic gain, with the understanding that, as Massaro once said, “Commerce without rule of law is authoritarianism” and will inevitably jeopardize your enterprise . American companies find themselves in a position “where they’re promoting social issues inside America and genocide outside of America,” Massaro observes. This is belowable. The answer is to reject Bach’s toadying and instead use company sway to force the Olympics to be genuine upholders of human rights — starting with the demand that Russia be banned from Paris, now.

The Games have been an active agent of evil over the past decade under Bach, but that association is now proving to be volatile and even potentially ruinous, given the global recoil to Ukraine and the coming China confrontation. “The effectiveness of sponsorship is built in perception, and these brands are at high risk if they react in the wrong way — or don’t react,” says Norm O’Reilly, dean of the Graduate School of Business at the University of Maine . “Similarly, there is big opportunity if they react in the right way. There are a lot of pieces here. It goes either way.”

The Olympics retain the potential to be a powerful and profoundly beneficial brand for the same reason that sponsors bought into them in the first place: No other event reaches hundreds of millions of people in all corners of the globe. It’s not just morally right for their sponsors to decouple from dictators. It’s better business. Safer, too.