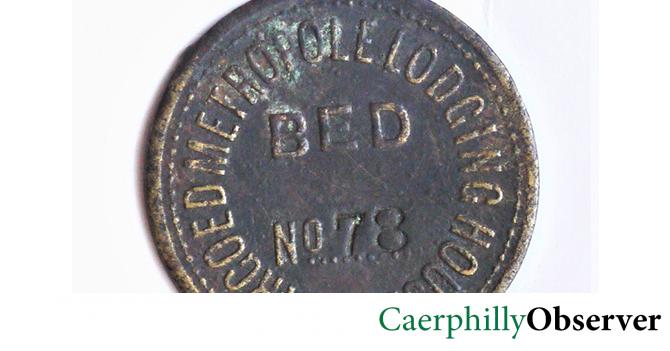 From just £3 a month you can help fund our work – and use our website without adverts. Become a member today

The mystery of a bed token has been solved thanks to a joint effort from our readers and the Gelliga Historical Society.

Caerphilly Observer was contacted in November last year by Paul Clarke, who was puzzled by a bed token he had found stamped with ‘Bargoed Metropole Lodging House’.

He told us: “I can find no reference to this long-gone establishment and wondered if any of your readers could shed any light on where it was or what happened to it”.

After publishing the story on our website, information and tips were received from readers – some with recollections of the building.

Enid Mayne wrote in and said: “I remember as a child hearing my parents talk about a lodging house which was in Baldwin Street.”

Alan Davies, who is originally from Baldwin Street, Bargoed wrote to say he remembered a common lodging house adjacent to the old Bake House, which would have been located at 27 or 29 Baldwin Street.

Alongside these tips, additional research was conducted by the Gelligaer Historical Society – which aims to study local history and heritage in the old parish and urban district of Gelligaer

Caerphilly Observer can now reveal details about the former premises.

According to an edition of the Bargoed Journal newspaper from February 9 1911, construction on the lodge began in 1910. Upon completion, it could accommodate about 100 lodgers.

The building was constructed by the “youngest builder in town” WB Lloyd and Company and owned by Messrs WB Lloyd, Mr Harry Bosanko and Mr A Hayter – Mr A Hayter also managed the building.

It was, by all accounts, “a bit of an unusual place,” according to Gelliga Historical Society member David Mills.

In fact, there are archived reports detailing an account of grievous bodily harm – and even an attempted murder.

The Bargoed and Caerphilly Observer, of which this newspaper is coincidentally named after, reported on the attempted murder on June 13 1919.

It reported: “A sensational incident took place at the Metropole Lodging House, Bargoed. It appears at the lodging house in question there are forty beds in one spacious room. John Steele a plasterer age 49 got out of bed about 5.30 in the morning and attacked Michael Dunn aged 70. James Hale rushed to Dunn’s assistance and Steele turned upon him, Hale received a nasty gash about 5 inches long across his throat.”

The Gelliga Historical Society was established in 1961 and holds monthly meetings, publishes a journal and distributes a monthly newsletter.

The society aims to study and promote local history – this is important, according to historical society member David Mills.

“You can relate to it,” said David, adding that local history sometimes gets left behind in favor of national history or UK history – meaning you don’t truly understand what’s around you.

The importance of local history is reflected by recent changes made by the Welsh Government following a consultation in 2021 – Welsh history is now a mandatory part of the curriculum.

The Welsh Government commented on the changes and said: “Through consistent exposure to the story of their locality and the story of Wales, as well as to the story of the wider world, learners can develop an understanding of the complex, pluralistic and diverse nature of societies, past and present.”

The Gelliga Historical Society, and David, will continue to promote local history too.

“I just like local history,” said David, “who they were and how they lived.

The Gelliga Historical Society meets on the last Wednesday of every month.

From just £3 a month you can help fund our work – and use our website without adverts.