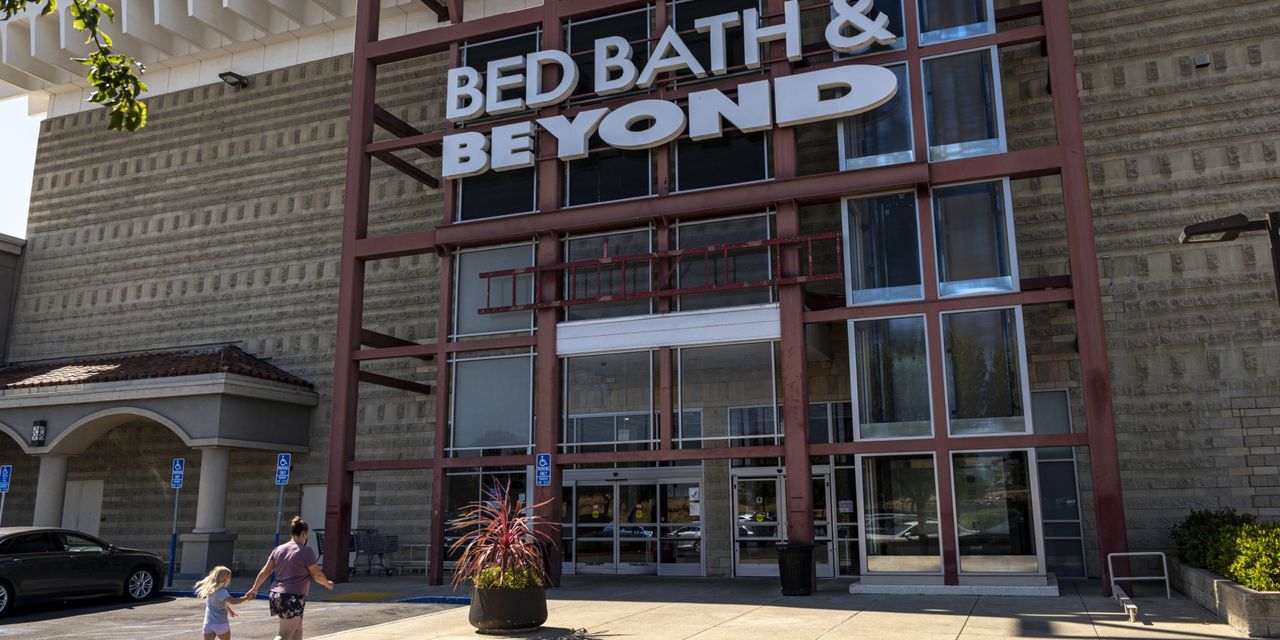 
Three bathroom merchants slipped on a bar of soap this past week. I’m not big on arbitrary stock market definitions, but I’m pretty sure that’s known as a bearish nude sprawl. Technically, it can signal that an economic haunch slide has already begun.

(ticker: BBWI), a mall seller of creams and scrubs, like Rainbow Cereal Gentle Foaming Hand Soap, marked down this past week to $3 from $7.50. My recent field work on the name confirms that the stores are still too perfumy for me to walk into. JP Morgan Securities has done a more thorough examination, and sees sales slipping this year. It downgraded shares to Neutral from Overweight and slashed its price target by more than half. The stock lost 9%.

(BBBY). That’s the one where you go up a quarter-mile escalator holding a 20% off coupon the size of a shoebox in order to buy a shower curtain for more or less what

(AMZN) charges. Bed Bath reported plummeting sales, raising doubts about whether it can pull off a turnaround. Let’s just say that when the title of a stock report from BofA Securities uses “liquidity,” “circles,” and “drain” in that order, it doesn’t inspire confidence. That one tumbled 24%.

Both of these companies are now in the market for new CEOs. Financially, they’re nothing alike. Bath & Body was the bright spot of L Brands before it split last year into two companies, the other being

(VSCO). Sure, fragrant hand-washing has lost its pandemic momentum, and JPM says it has spotted fall and winter merchandise still being cleared out. But the company still generates ample free cash. Most analysts remain bullish. And I’m thinking of upgrading the Pumpkin Pecan Waffles 3-Wick Candle to Buy on valuation.

Bed Bath, on the other hand, was burning cash even before the outlook recently turned darker on revenue. It owns a stroller and crib seller called buybuy BABY, and activists have pressured the company to sell. But same-store sales there are now declining., too. And there’s a deep industry depression in output units—babies, not cribs.

(RH) as the third bath stock, because it sells tubs and faucets. The company changed its name from Restoration Hardware so as not to bring hardware to mind. It won’t evoke restoration, either, the way it just lowered guidance for the second time in a month. Shares there dropped 11%.

This weekly email offers a full list of stories and other features in this week’s magazine. Saturday mornings ET.

Back to Bed Bath. How could an epic home-goods boom have left it so weak? It was slow to embrace e-commerce, says Sucharita Kodali, a retail analyst at tech forecaster Forrester Research. That left it behind the curve on so-called omnichannel retailing, whereby sophisticated data systems can put both store and warehouse inventory to full use while predicting local buying trends. Everyone struggled with supply chain mayhem, but Bed Bath seems to have been flying blind.

It also pushed too hard on in-store brands at a time when customers wanted nationally known ones, says Seth Basham at Wedbush Securities. And it failed to convince customers that with coupons, the company’s pricing is in line with Amazon.

Bed Bath now finds itself stuffed with big, high-price items that shoppers no longer want. And it’s not alone. If you’re in the market for a patio set, this is your summer. Stores have pulled back on orders, but merchandise they ordered previously is still showing up. It could take nine months to work off the inventory bloat.

Everything depends on demand. “The consumer is deteriorating,” says Basham. He recommends shares of car parts sellers like

(WOOF), because shoppers still fix their rides and spoil their furry friends in recessions. Kodali at Forrester is more upbeat. “The economy is stronger than there seems to be credit given to it right now,” she says.

We’ll know soon. This past week, spending data for May showed less growth than expected, but growth nonetheless, giving bulls and bears something to point to. We also learned for sure that first-quarter economic growth was negative, as estimated. And a real-time estimate of second-quarter growth called GDPNow, tracked by the Atlanta Fed, slipped from positive to negative. Defining recessions is a bit of a roll-your-own affair among economists, believe it or not, but if your definition is two straight quarters of sagging gross domestic product, we might already have entered one.

At least that would take some of the pressure off prices, right? Speaking of which….

Inflation will rise to more than 10% by the end of the year, versus a recent 8.6%, predicts Rob Arnott, founder of Research Affiliates, which has $168 billion tied to his strategies. He looks first at monthly inflation rates that fall from the annual measure as we move on to new months. Next to fall is 0.9% for June of last year, which is high. But the Atlanta Fed’s GDPNow forecast has a Midwest cousin called Cleveland Fed Inflation Nowcast. It puts inflation for the June that just ended at 0.97%, suggesting we’ll go from high to slightly higher.

The three months following June 2021, however, had only modest inflation. The upshot is that the inflation rate for this July through September would have to fall below 4% annualized to pull the overall rate lower, Arnott says.

He doesn’t see that happening, and housing is a big part of the reason. It makes up a third of the consumer price index, counting both rents and something called owners’ equivalent rent, which is calculated by surveying homeowners. Rents have undershot house prices, because it takes a while for leases to come due. OER is even more understated, because most homeowners have no idea what their houses could generate in rent. Arnott predicts three years of already high house prices moseying their way into CPI math.

That would do little to soothe investor anxiety. I’m not sure that even deep discounts on out-of-season aromatherapy would help.