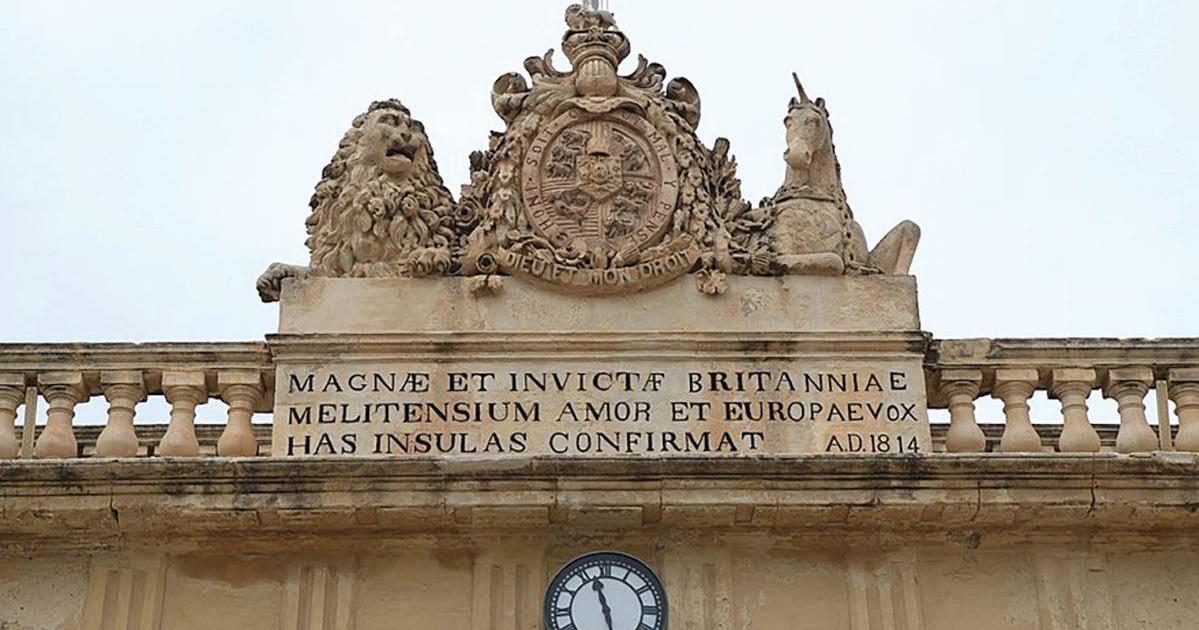 Which of Malta’s governors was most eccentric? Let’s look at the governors’ list, which runs from 1813 to 1964. The first name up is Maitland, and Sir Thomas has no competition in eccentricity. His eccentric behavior includes setting his bed on fire, three times, with him in it! 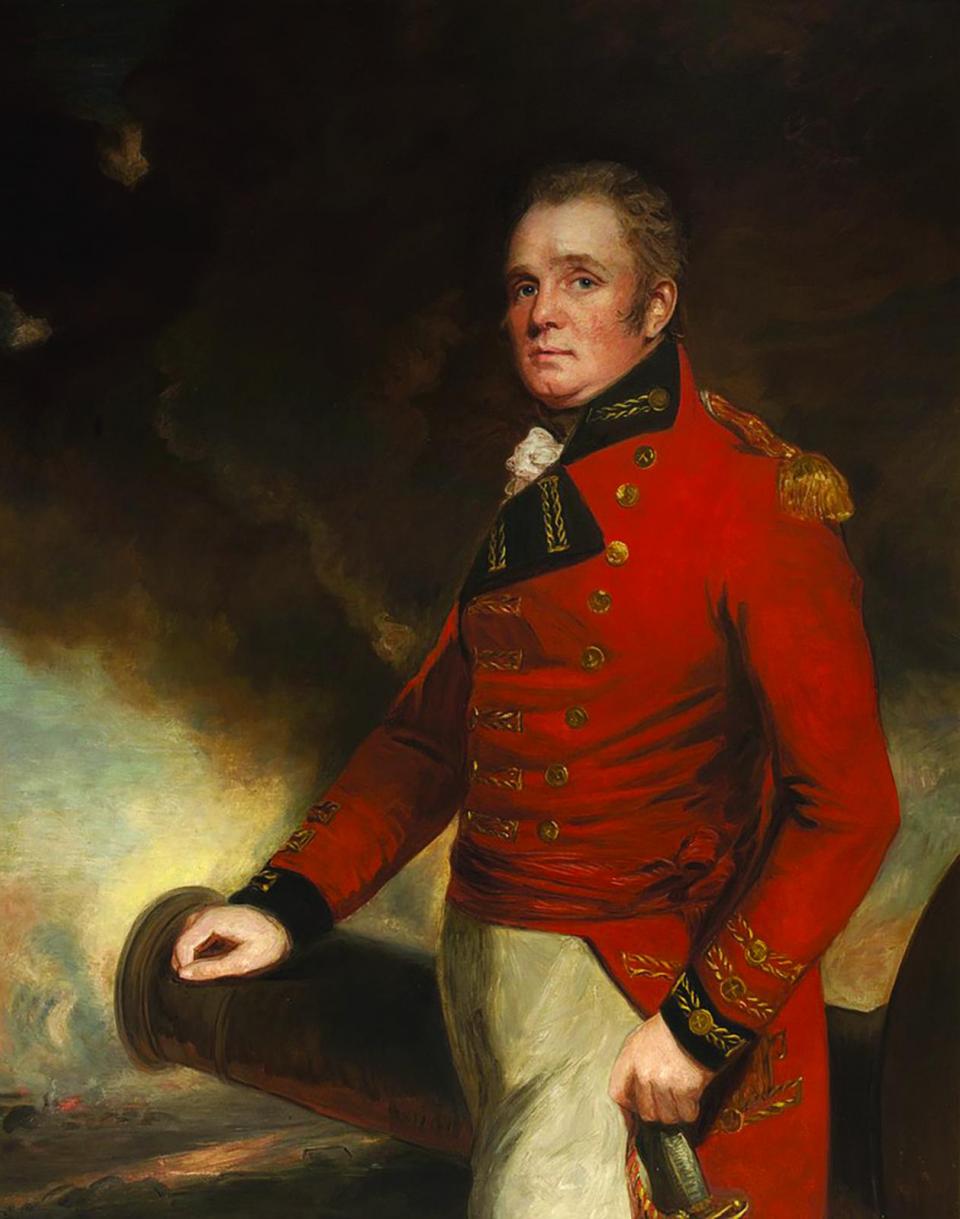 Maitland was able and decisive but often appeared imperious, autocratic and dismissive, fully earning his sarcastic Malta ‘title’ of King Tom. Further, in the words of the Oxford Dictionary of National Biography, Maitland was “…querulous, bad-tempered, and ill-mannered”. His dress was slovenly, and he overate and was frequently drunk. In modern terminology, he may have had “a substance abuse” problem.

How could such a man be appointed to a governorship? Simply, Maitland’s abilities, decisiveness and capacity for administrative work outweighed his defects.

In 1797, Maitland was commanding troops in San Domingo, Haiti, attempting to put down the slave rebellion led by Toussaint L’Ouverture. With troops sickening with tropical diseases and making no progress against the rebels, Maitland decided the war was unwinnable. Without orders, Maitland negotiated a ceasefire and extricated his force without further conflict.

With no orders for his decisive step, would Maitland be censored? No. The British government was pleased to be extricated from a difficult situation without a lengthy decision-making process. Maitland was given other military assignments and served as MP for the Scottish constituency of Haddington between 1794 and 1796, and again from 1800 to 1806. He spoke robustly in parliament, often against war.

Ceylon (modern Sri Lanka) was acquired by Britain, in the Napoleonic Wars, to prevent France using the island to attack India. When Maitland arrived, there was war between British forces and the interior Kingdom of Candy. Maitland held hostilities and worked to improve agriculture, commerce, finance and governance. 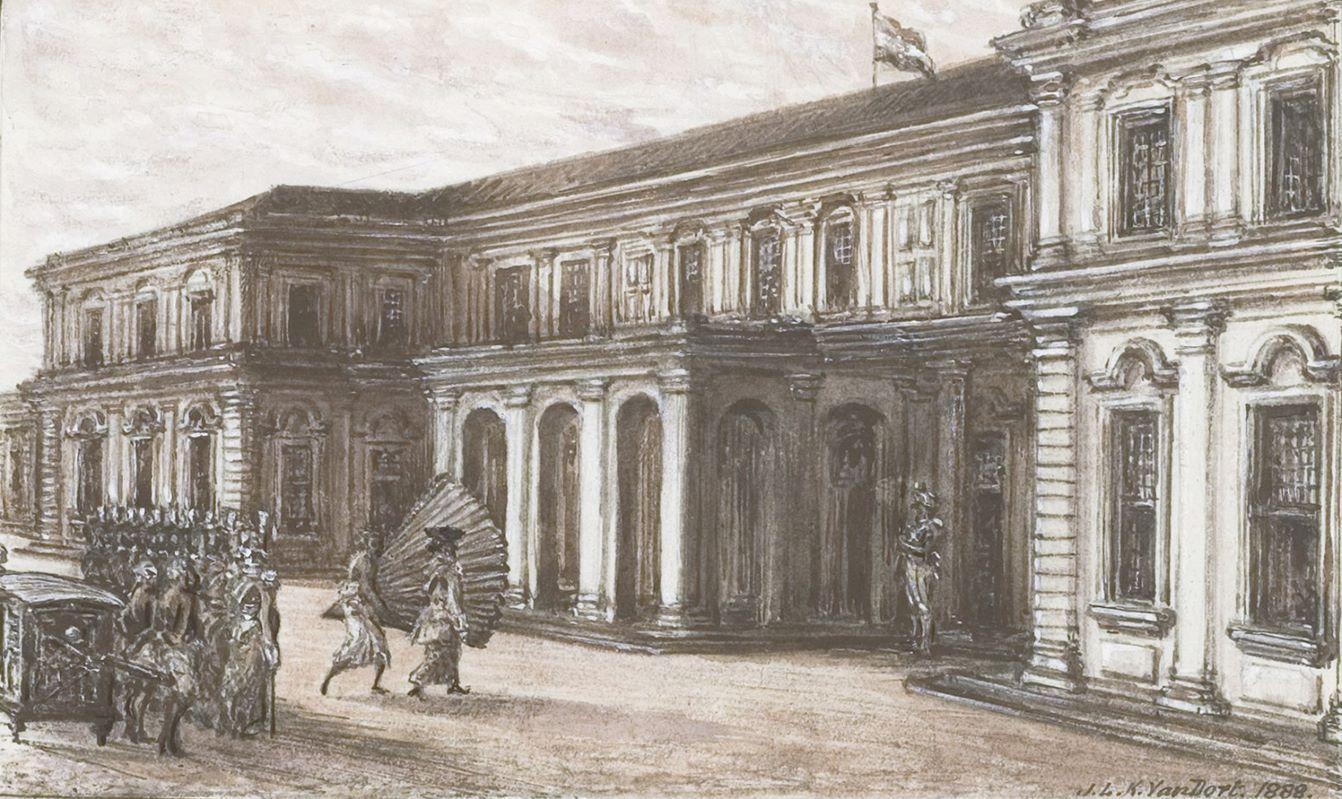 By 1811, Maitland’s health was poor and he returned to Britain. He never married, but in Ceylon, gained the affection of a lady of Portuguese and Sinhalese descent. So enchanted was Sir Thomas that, when he had built a governor’s palace, a tunnel was driven, from the palace wine cellar to the home of the lady, to facilitate discreet interaction.

The 1812 Commission was established by Britain to examine Malta’s condition. Among other things, the commissioners recommended that the head of island’s administration should be a governor who was also commander-in-chief. Since Britain assumed responsibility for protecting Malta, administration was largely headed by civil commissioners, including Sir Alexander Ball. The garrison commander headed defence.

Sir Alexander told London he was uncomfortable with a position that focused decision-making on one man. When Ball held a leadership role in the campaign to evict the French, he convened a national congress of representatives from Malta’s villages and several of Malta’s judges. However, when Maitland became governor in 1813, he refused to have an advisory council to help with decision-making.

From 1800 to 1813, Malta enjoyed an upsurge in trade, as it became a base for British goods being exported into southern Europe, in defiance of Napoleon’s decrees to exclude British trade. The wartime boom was cut short by disease.

Malta had an efficient quarantine system based on Manoel Island, but in 1813, goods from Egypt were smuggled into Valletta. Plague spread rapidly, killing thousands. By the time Maitland arrived on October 3, 1813, many sensitive measures were in place to contain disease. Maitland was not satisfied. In effect, he dismissed the Board of Health and introduced stronger regulations to curtail movement and contagion.

The number of new cases dropped rapidly; by September 1814, regulations were relaxed but the trade boom was gone. A plague-infested port was closed, no ships could enter. In addition, with the end of the Napoleonic wars, the special conditions promoting trade ended. Malta entered into a long phase of economic depression, unemployment and much poverty.

During the plague, Maitland illustrated his decisiveness. With the trade collapse and plague costs, the civil administration ran short of money. Maitland, as commander-in-chief, raided the military chest to provide financial support. Eventually, the money was repaid.

As Patrick Staines explains in his informative Governing Malta (1800-1813), Britain inherited, from the rule of the Order of St John, departments of government regulating harbor activity, customs, quarantine, the purchase of imported grain, a treasury, with property assets to administer, and a legal system. Britain had discouraged island civil commissioners from disturbing customary practice and relatively few reforms had been introduced. Maitland could not resist reorganizations in an effort to promote efficiency and stamp out corruption.

Among other steps, the governor took a strong hold on Malta’s finances, ensuring that no funds left the treasury without full authorization. Government employees, who were too old to function fully, were put on pensions. Remaining civil servants were given more adequate salaries. Judges had been paid by fees: Maitland placed the judges on salaries and the fees went into the treasury. The commercial court was reformed.

the Universita, headed by an Englishman, who had been responsible for grain imports, which was in a financial mess. Maitland created a government department to oversee the grain trade, telling the colonial office that the Universita was “the most troublesome dunghill of corruption” he had ever encountered.

Maitland introduced the registration of births and deaths. Marriage licenses were already in place. Parish priests, of course, continued to record births, marriages and burials, as they had done for centuries, providing rich sources for present-day demographers. A police force was organized in 1814.

General Sir George Whitmore, RE, served in Malta from 1811 to 1829, thus covering the whole time of Maitland’s governorship, and recorded, in his diary, much interaction with Maitland. Whitmore’s travel diaries were published by Joan Johnson as the general (1987).

Whitmore had a positive view of Maitland, writing, “No man ever served the Crown more zealously or with cleaner hands”. The general traveled with Maitland and worked on his projects, observing many eccentricities, including excessive ordering of clothing and footwear items, snuff boxes, and storing salt herrings under his bed.

Peace did not bring prosperity to Malta. Trade had been disrupted by disease. Now British forces were run down, employment by the garrison and the dockyard decreased. There was a widespread post-war depression.

In the peace settlement, Britain acquired the Ionian Islands in the Adriatic Sea and held them until 1864, when they were ceded to the state of Greece, established in 1829.

Maitland was appointed to a new responsibility – High Commissioner of the Ionian Islands. Around the same time, he was made Commander-in-Chief of the Mediterranean, with the exception of Gibraltar, and given oversight of Britain’s North African consulates, with the exception of Morocco. All appointments indicated how highly Maitland’s administrative abilities were held by the British governments.

As Ionian High Commissioner, Maitland enjoyed Corfu and spent time on the island where he decided to create an Order of St Michael and St George, largely to reward Maltese for service. Maitland was aware that Malta’s nobility – which in 1800 mostly wanted the island returned to Sicily after the Order’s departure – subsequently felt ignored. Governor Maitland appointed nobles to be lord lieutenants of six groups of villages on Malta. The nobles had little power but were recognized as leaders by the Crown. Now, in Corfu, he was to create an order that could bestow knighthoods on deserving Maltese and Ionians.

In April 1818, George III approved the creation of the Order of St Michael and St George, with a structure much like the Order of St John. The new order would have a grand master, grand crosses and knight commanders. Unsurprisingly, Maitland was grand master. Members of the new order were appointed, including Malta nobility, at an investiture, held in the Throne room of the Palace, in Valletta. The Throne room was renamed The Hall of St Michael and St George.

George Whitmore, RE, was instructed to design and build on Corfu, a Palace of St Michael and St George. The structure included a residence for the Ionian High Commissioner, Maitland, and space for the legislature of the Ionian Islands. 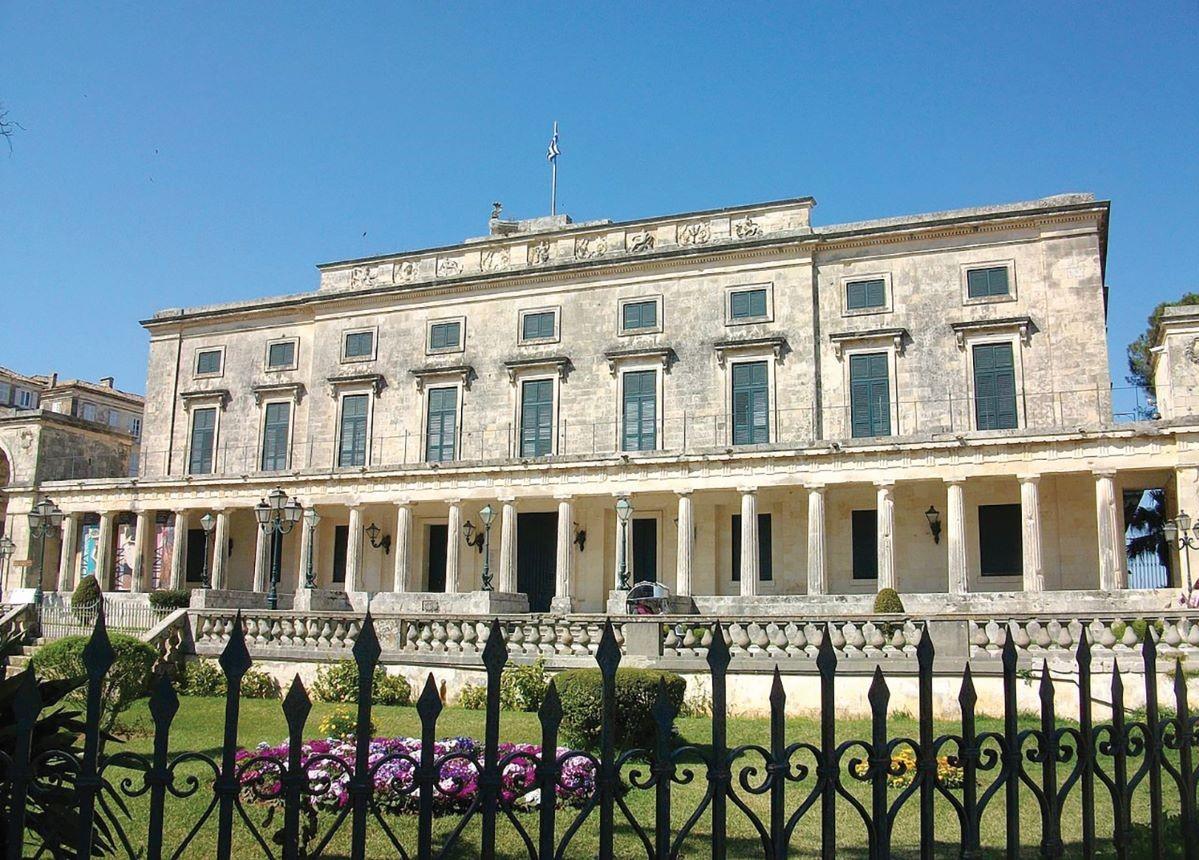 Palace of St Michael and St George in Corfu.

The royal engineer decided to use Maltese stonemasons and Malta’s globigerina limestone in constructing the palace. Whitmore was well acquainted with the qualities of Malta’s building stone. As he recorded in his diary, there were few public buildings in Valletta that he had not worked on, and he had designed, in whole or part, the Main Guard on Palace Square, a St Anton extension, and later, Bighi Royal Naval Hospital . 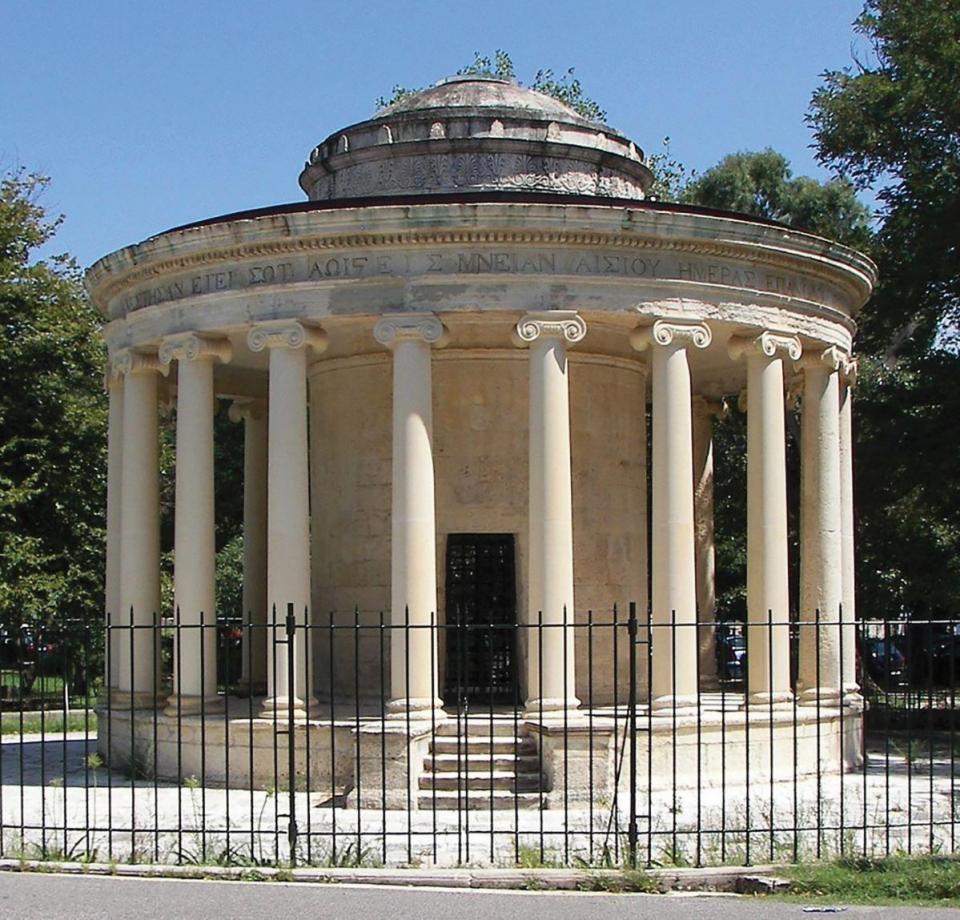 The Maitland Monument in Corfu.

Fittingly, the Corfu Palace, other than the loggia, reflected the dignified simplicity of Girolamo Cassar’s 16th-century auberges, built to house the Order after the founding of Valletta. Eventually, the palace on Corfu became an art gallery.

Maitland was careful to safeguard Malta’s civil government assets, most of which had accrued to the island when the Order was forced out by the French. The assets included foundations set up by knights and many buildings erected by the Order and the langues, including the Palace of the Grand Masters, the treasury building, the biblioteca, the auberges, and St John’s Conventual Church, with its art works. The Palace housed a collection of armour. Senior army officers wanted it sent to Britain. Maitland would not allow the assets to be transferred.

Malta, at the time, lacked a Protestant church. The army suggested holding protestant services in the Order’s Conventual Church. Maitland, realizing this would be offensive to many Maltese, forbade it. Then he went further in 1822, allowing the Bishop of Malta to use the church as a co-cathedral, along with the Mdina cathedral, but stipulated that the building remained government property.

Maitland’s effort to bring more land to market proved difficult to enforce, but in 1822 he required the Church in Malta to dispose of land bequeathed to it (Mortmain) within one year.

In spite of Maitland’s many reforms and insistence on efficient and incorruptible administration, he was never popular. He was zealous in this protection of civil government finances and the elimination of wasteful spending. In his private life, he incurred extravagant expenditures on clothes, food and drink but, with a large income, he could easily afford his excesses. On a visit to Floriana in 1824, he suffered a stroke and quickly died. Sir George Whitmore, again, using Maltese stone and craftsmen, designed a monument to him in Corfu.

Brian Blouet teaches at the College of William and Mary in Virginia, USA. He is the author of The Story of Malta and has prepared, for Midsea Books, a volume on Malta and Britain.

Independent journalism costs money. Support Times of Malta for the price of a coffee.