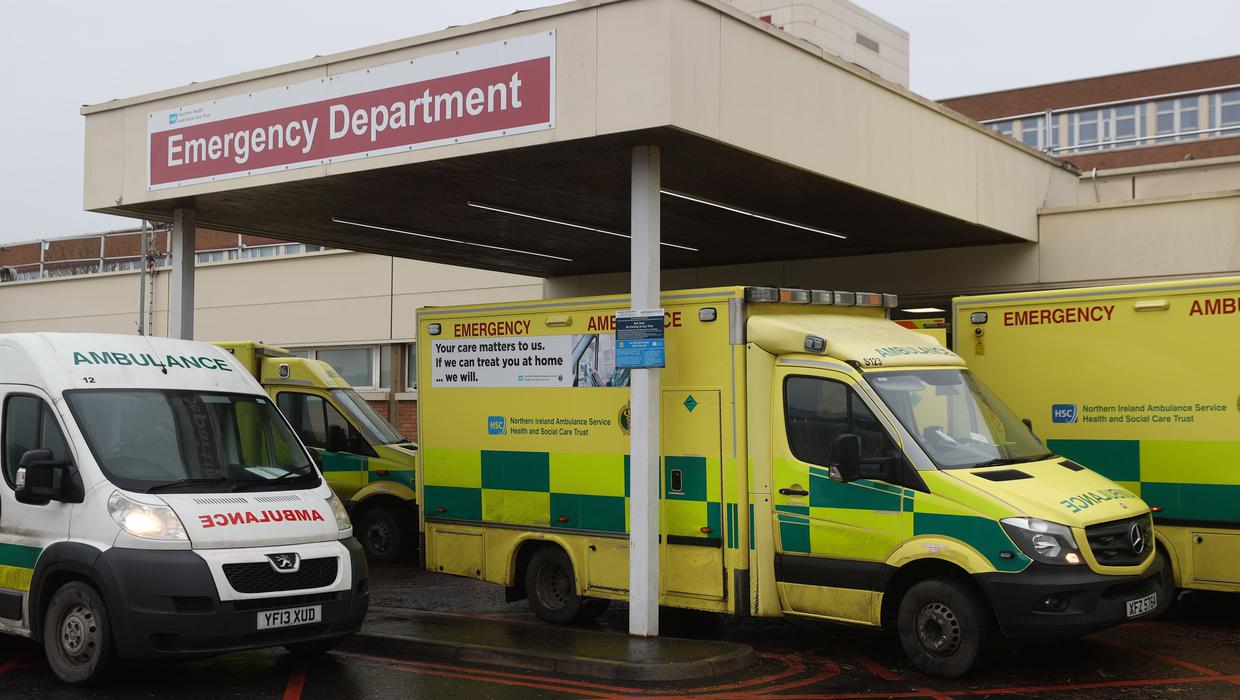 A Tyrone woman has called on politicians to fix Northern Ireland’s health service after her terminally ill mother was forced to wait for 32 hours for a hospital bed.

Laire Murphy told Radio Ulster that her mother was forced to spend 24 hours on an examination table as she waited for a bed.

In an emotional interview, she said her mother was diagnosed with multiple myeloma, an incurable bone marrow cancer in April 2020.

She was then told that her diagnosis was terminal in April of this year.

On Sunday, Claire took her mother to Craigavon ​​Hospital after she developed an infection.

“So we got her down to Craigavon ​​for about 1pm on Sunday,” she told the station on Tuesday.

“And we were triaged quite quickly and put into a family room to be isolated.

“It’s just that there was absolutely no bed, nowhere for her not even a trolley in the A&E for her.”

Instead her mother was forced to sit in her own wheelchair, before she was then moved to an examination table, which she stayed on for the next 24 hours.

“There was a sort of like an examination table in the room, which is like a hard plastic table,” she said.

“At the back of it sort of moves up and down, but it’s not a trolley and it’s not a bed and we were there then for the next 24 hours.”

She said her family knew early on Monday that her mother would need to be transferred to the Royal Victoria hospital, where there would be a bed for her.

The doctors felt that, due to the risk, they needed to be transported to an ambulance.

However, there were no ambulances available.

“So after about four hours, when we knew that the team in Belfast knew that we were coming on there was a bed I just said I’m gonna have to take care her myself,” she said.

“They weren’t keen for that because of the risk associated but the doctor came in and assessed her and said right, okay, if that’s what you feel you need to do.”

She then took her mother in her own car to Belfast, where there was a room and bed for her.

“I took her in my own car to Belfast, which was you know, anybody would do that if they needed to but it shouldn’t be the case,” she said.

“And she got there and as soon as she got into the room and saw the bed she just started to cry.”

She called on those people who have the power to fix the health service.

“I don’t have the answer how to fix it,” she said.

“But there are people out there that do do have the answer and the abilities to do it, and they need to, because it’s almost as if we’ve accepted that this is the way the health service is, and that’s so scary.”

In a statement, Southern Health Trust, the trust responsible for Craigavon ​​Hospital, said it is facing “ongoing challenges” in admitting patients.

“Staff are doing everything they can to make patients comfortable and treat everyone as safely and quickly as possible,” a spokesperson said.

“Despite all of this, regrettably many patients are experiencing longer waits.

“We are facing ongoing challenges in admitting patients.

“Most of the long waits in the Emergency Department are due to patients waiting for a bed to become available following another patient’s discharge.

“This has a direct impact on the length of time new patients who arrive at the department will have to wait to be seen.”