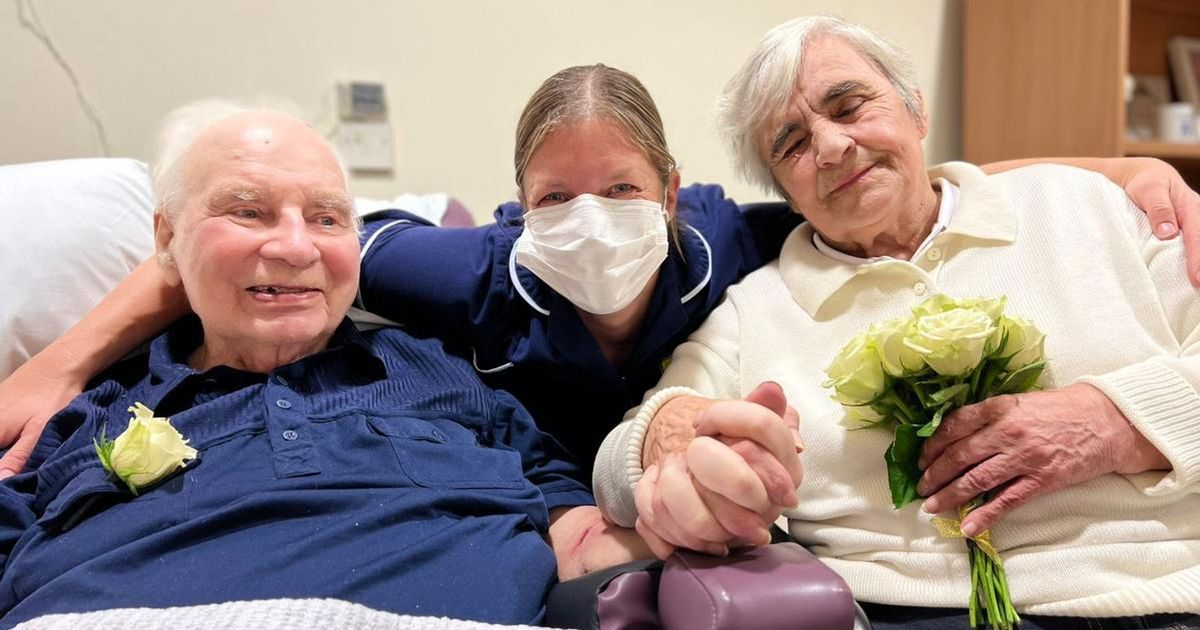 A patient at Royal Derby Hospital married his longtime partner after being diagnosed with an incurable disease.

Keith Turner, 86, was told he didn’t have long time to go.

Keith decided to marry his partner Rita Trickett, 83, after they had been together for 40 years.

After he was hospitalized a week ago, Keith’s condition had worsened.

Sister Broad said, “Our Advanced Clinical Practitioner Louisa baked a wedding cake and the team provided a bouquet for the bride.

“A perforated panel was also made for the groom, as well as a buffet and decorations by our employees.

“I had the great privilege of being asked to be a witness and although it was my day off, I was so happy to be there on her special day.

“It was also a nice surprise for me to receive a bouquet of flowers and a nice card for what I did.

“It’s times like this when you realize how short life can be and I have fulfilled one of your last wishes, which is an extreme privilege for me.”

Keith and Rita met in 1969 while they were both working for the Red Cross.

Keith said, “Rita was a senior executive at the time and my wife’s best friend.

“When my wife died of cancer, Rita took care of me and we’ve been together ever since.

“However, the thought of getting married was never on our mind. I didn’t care that much about labels and we’re both pretty independent people.

“It wasn’t until I got sick that I thought it was time to ask her to marry me, and she said yes.”

Keith was diagnosed with mesothelioma, a form of cancer, and his condition worsened after bleeding over the weekend.

Rita, who was previously hospitalized to recover from a stroke, was recently discharged.

She added, “This has been the longest time we’ve been apart in years, it was horrible.”

Keith also recently made the decision to discontinue his treatment after the wedding.

But Rita has decided to support him in this decision and adds: “It is what he wants and I agree with him, he has had enough and is tired.”

The ceremony took place in the day room on the side of Ward 310, and some staff came after their shift to convey their good wishes to the couple.

Rita’s granddaughter also attended the ceremony along with the hospital staff on the wards to celebrate the special day with them.

Ward Sister Nicola Salt, who took photos of the ceremony to create a lasting memory of the day for the couple, said, “Sister Amanda did an absolutely amazing job bringing it all together and the team to create a special moment that can be appreciated.

“It was emotional and it brought the team to tears, but we’re all so proud.”

To see the biggest and best stories, first sign up here to read our newsletter