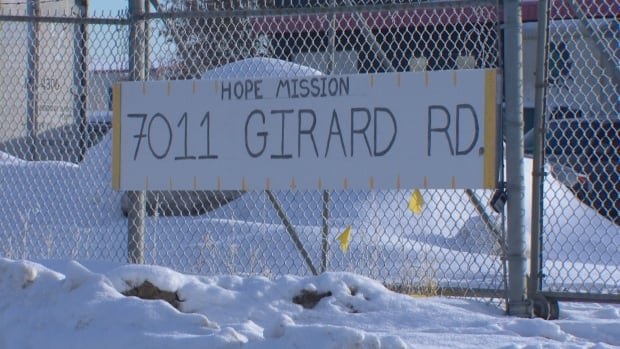 A temporary homeless shelter with space to house up to 160 people per night has been approved for an industrial area on Edmonton’s south side.

The City of Edmonton approved the shelter on Nov. 23. It is located in a Hope Mission warehouse east of the Avonmore neighborhood, near 75th Street and Argyll Road.

Pure Edmonton Casino and another nearby business appealed to the Edmonton Subdivision and Development Appeal Board in December. In a Jan. 13 decision, the board denied the appeal.

Tim Pasma, Hope Mission’s manager of homeless programs, said the shelter is intended to be used when the temperature is extremely cold or when fires or maintenance issues affect other shelters in the city.

He said the converted warehouse will not be open 24/7 and it won’t be open for walk-ins.

Hope Mission plans to use two 24-seat buses to transport people between the new shelter and downtown.

“It was always intended to just be a safety valve for us,” Pasma said.

He said he anticipates the shelter will open, if needed, in late January or early February and it will close at the end of April.

Funding for the shelter is coming from the province.

During the appeal hearing earlier this month, a handful of businesses argued against the shelter being approved.

David Robinson, a business owner who owns a property nearby, said in the hearing that the shelter would result in increased crime in the area and could potentially lead to increased insurance costs. He declined an interview with CBC News on Wednesday.

Pure Canadian Gaming Corp.’s legal team said during the hearing that the nearby Pure Casino Edmonton had not been notified about the proposal until mid-December and the company was concerned about theft, vehicle damage and negative effects on revenues.

The legal team also said that putting vulnerable individuals, who may have addictions, close to a casino would likely be risky for them.

Pure Canadian Gaming Corp. has since sold its four Pure Casinos in Alberta. Neither the company nor its lawyer responded to interview requests.

Two other people supported the appellants during the hearing, representing the views of Regency Innovations, a kitchen cabinet manufacturer, and a condo storage complex near the proposed shelter.

They said they were concerned about declining property values ​​and increased traffic and mischief.

The city’s development officer said during the hearing that the proposed shelter aligned with the city’s plan to end homelessness and would not unduly interfere with the neighborhood’s amenities or property values.

“We’re willing to listen to all sides and we want to be partners in finding solutions,” he said.

The Emmanuel Foundation, an international development charity that operates out of the building where the shelter will operate, is not opposed to the development.

“We would coexist with them,” said Lyle Johnson, the foundation’s executive director.

Johnson said the charity realizes the city has seen the number of people experiencing homelessness double and beds are needed.

Could shelter be used next winter?

When asked if the temporary shelter could be used in the winter of 2023-24, Pasma said Hope Mission would have to apply for a development permit again.

“As a good neighbor in the community, we would want to because we understand that there’s other concerns that we need to address,” he said.