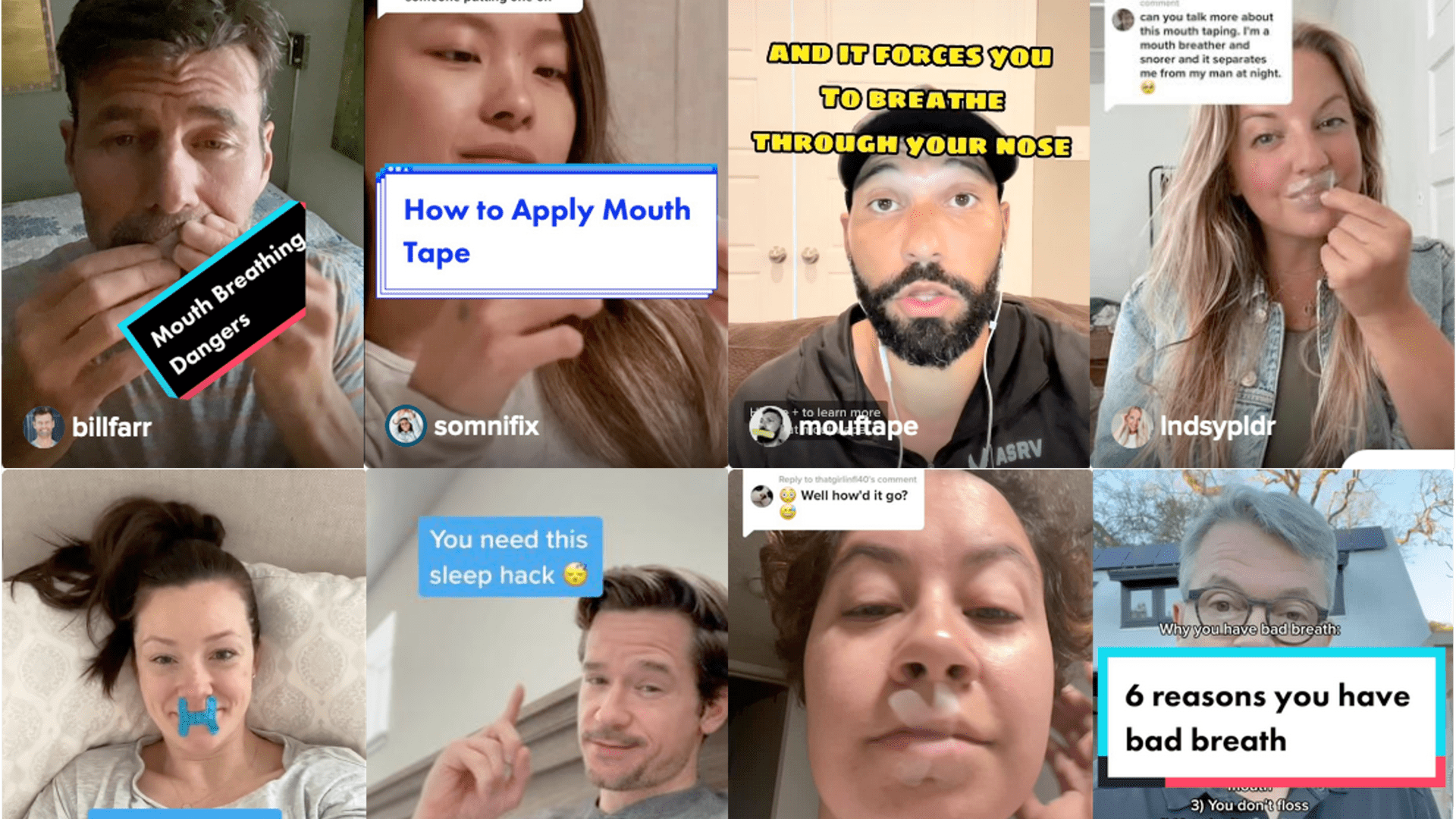 #Mouthtape for sleep is trending on TikTok with 38.5 million views, accompanied by videos of people with tape over their mouths as they prepare to go to bed.

Many posters claim this increases their ability to breathe through their nose throughout the night, reduces snoring, lowers their risk of cavities, and even gives them better breath in the morning. Some argue that breathing through your mouth while sleeping “puts you at higher risk for sleep disorders like snoring, sleep apnea & hypopnea.”

Lauryn Bossstick, a blogger and podcaster, says she tapes her mouth shut every night. “Honestly, you guys, what I’ve noticed the most is I just have a deeper sleep which gives me so much more energy in the morning,” Bossstick said in her TikTok video.

Does taping your mouth help you sleep better? ‘There’s not a lot of evidence’

Taping your mouth shut is not likely to help you sleep: “The answer is probably not,” says David Schulman, professor of medicine at Emory School of Medicine and president of the American College of Chest Physicians.

A common reason why people are mouth taping is to decrease snoring. That may be possible, but “there’s not a lot of evidence that it actually helps your sleep apnea, or your health,” he adds.

Meanwhile, taping your mouth while you sleep may not be fully safe. Here are some possible outcomes of having your mouth taped at night, he says:

“I do not advocate that patients tape their mouth for sleep,” Schulman says. “And certainly, if they snore and might have sleep apnea, that can get worse. So that’s particularly a dangerous thing to do.”

Before trying taping, it’s important to ensure that you don’t have an anatomical obstruction in your nose like a deviated septum, says Raj Dasgupta, spokesperson for the American Academy of Sleep Medicine who practices medicine in the division of pulmonary, critical care and sleep medicine.

“Let’s say they have a blockage in their nose. Could you imagine taping your mouth and your nose is blocked?” hey asks “I would definitely be careful when we talk about mouth taping.”

Some people consider mouth taping to induce nose breathing throughout the night. Breathing through your nose while sleeping is good for overall health because it humidifies and filters the air better than mouth breathing, Dasgupta says. This makes the air you breathe in less irritating to the lungs, he adds.

Additionally, “when you wake up in the morning, you won’t have that dry mouth or bad breath,” he adds.

I would definitely be careful when we talk about mouth taping.

Spokesperson for the American Academy of Sleep Medicine

Nose breathing while resting could increase nitride oxide, a compound in your body that can be helpful for keeping your blood pressure under control, Dasgupta notes.

“I don’t feel that taping your mouth is the only option,” he says. These are some other things you can do to avoid mouth breathing and snoring:

If you’re having a hard time getting the sleep you desire at night, consider these options that Dasgupta and Schulman suggest:

All of the recommendations will have distinct effects on sleep for different people, and the best practices for each person will differ, says Schulman.

“For people who are maybe not doing these best practices but aren’t having any problems, sometimes that’s okay,” he says.

Sign up now: Get smarter about your money and career with our weekly newsletter