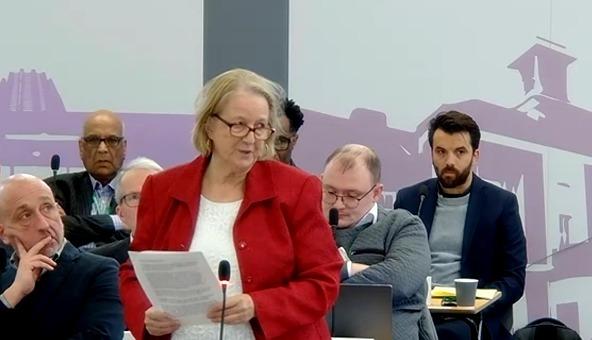 The leader of Sutton Council waited for a hospital bed on a trolley for 17 hours after suffering a blood clot on the lungs this Christmas, she revealed at a council meeting on Monday.

Introducing a motion on fair funding for local government, Ruth Dombey opened up about her own experience of the stretched service at St George’s Hospital in Tooting, South West London.

She said: “I collapsed on Boxing Day with what turned out to be a massive pulmonary embolism – a blood clot across both my lungs.

“It took an hour to get through to 111 and two and a half hours before a doctor called me back, by that time I couldn’t stand up without fainting so the doctor called an ambulance and told me it could take up to four hours It took five and a half.”

The Liberal Democrat politician said the paramedics gave her oxygen and “saved her life”.

They had to call the fire brigade to stretch her down the stairs and out of her home.

She continued: “I was taken to St George’s under blue light, I needed to be in the ICU but there wasn’t a single bed, so I spent the next 17 hours on a hospital trolley under the watchful eyes of A&E doctors and nurses before a bed finally became available.

“The medical and nursing care I received was exemplary and I will be forever grateful for those working well past their 12-hour shifts to provide passionate and expert care.”

A few days after Cllr Dombey was discharged, the hospital in Tooting declared a critical incident due to a shortage of beds.

In Parliament last week, Putney MP Fleur Anderson said the government’s handling of the NHS was “chaotic” and revealed 60 nurses had resigned from one department at St George’s in the past year.

Cllr Dombey said the “NHS is on its knees” adding: “In 21st Century Britain, patients are being treated in hospital corridors”.

She said as NHS staff are “leaving in their droves”, social care is also facing staff shortages.

Her comments come after the government announced it would be buying up thousands of extra beds in care homes to speed up hospital discharges in a bid to reduce the pressures currently seen.

Cllr Dombey added: “Everyone in local government is prepared to step up and play our part the answer isn’t to starve local government of essential funding and enable us to do our job so that fewer people need expensive acute services.”

The motion to lobby the government for more funding for councils was voted through by councillors.

A spokesperson for St George’s said: “Our hospitals are really busy and our staff are working really hard to do the best for our patients, however there can often be long waits and we’re sorry that this was the case for Ruth.
“As always, we are encouraging the public who don’t have an emergency, to access NHS 111 first online if they need urgent health care, so they can be seen in the best place for them which allows us to prioritize the sickest patients. ”