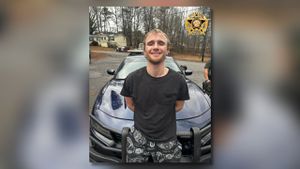 A suspect was all smiles during his arrest after being wanted by deputies for a violently assault in Buchanan, Georgia back in April 2022.

According to the Haralson County Sheriff’s Office, deputies arrested Matthew Kevin Cantrell, 29, on Tuesday in Hiram, Georgia. Cantrell was wanted on aggravated assault charges from a violent incident in Haralson County on April 29, 2022.

On that day, deputies said they were called out to 7561 GA Highway 120 in Buchanan about an aggravated assault. When they got to the location, the victim said he was laying in the bed when an unknown man came into the room and hit him multiple times with a baseball bat.

The victim was taken to the hospital with injuries.

Investigators said video and other evidence led HCSO to identify Cantrell as the suspect who attacked the victim.

Investigators said Cantrell was wanted on those charges since May 2022.

In a photo taken by HCSO deputies, Cantrell smiled for the camera with his hands cuffed behind his back.