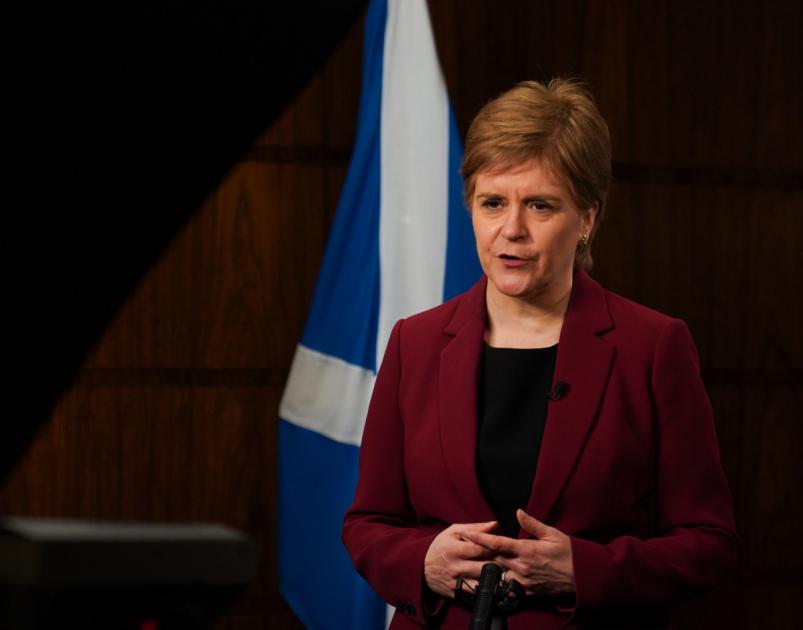 HOSPITALS in Scotland are seeing a “very slight easing” in winter pressures but remain “very full”, Nicola Sturgeon has said.

In her second update on winter pressures on the NHS, the First Minister said there were also signs that the situation in A&Es is “stabilising” following a string of worsening weekly statistics during December showing record numbers of people spending over 12 hours in emergency departments.

The next set of figures – covering the first week in January – will be published tomorrow.

However, Ms Sturgeon stressed that the health service “remains intense”, but that the Government hopes to see this reduce in the coming weeks.

Speaking at a briefing this morning at St Andrews House in Edinburgh, where she was joined by Health Secretary Humza Yousaf and chief medical officer (CMO) Professor Sir Gregor Smith, Ms Sturgeon said: “It’s fair to say the pressures continue to be very severe and the NHS remains under significant strain – that in part reflects very high levels of Covid, flu, Strep A and other respiratory illnesses.

“While the majority of patients continue to receive excellent and timely care, the current pressures are having an adverse impact on too many.”

She added: “Although pressures do remain severe, some of our latest management information suggests a slight easing in some areas.

“For example, the number of calls to NHS 24 has reduced in the past week and feedback from NHS boards has been that the situation in Accident and Emergency is also stabilising.

“That said, A&E waiting times for many are still far higher than they should be and that is caused to a very significant extent by the fact that hospitals remain very full.

“Despite some very initial indications of a very slight easing of some winter pressure in the past week, hospital occupancy is still very high at this stage.”

She added that feedback from hospitals suggested that bed occupancy was “if anything, very marginally higher” than the previous figure of 95% but “broadly the same”.

“Hospital occupancy, because of the flow of patients, will probably take longer to start to reduce than Accident and Emergency waiting times, for example,” said Ms Sturgeon.

READ MORE: The pioneering antibiotics service set to keep hundreds of patients a week out of hospital

She went on to say that said ongoing work between care providers and health and social care partnerships to “match” hospital patients ready for discharge to interim beds in care homes after the Scottish Government put up £8 million to secure an extra 300 temporary beds in the care sector.

This is in addition to around 600 interim care beds already used to provide temporary placements to patients ready to leave hospital but awaiting social care packages.

Around 1,700 patients currently occupying NHS beds are categorized as experiencing a ‘delayed discharge’.

However, Ms Sturgeon said the Government had also asked health boards to review all discharge plans for patients in acute and community hospitals by the end of January “to identify any patients who should be discharged more quickly and help resolve any issues that might be preventing them discharge from hospital”.

This may include patients who are not officially counted as a ‘delayed discharge’, but who may have more complex reasons for being stuck in hospital when they are medically fit to leave.

It comes amid a drive to free up beds and relieve exit block in A&E departments.

Three health boards – Greater Glasgow and Clyde, Borders, and Ayrshire & Arran – have paused all non-urgent elective operations, such as joint replacements, to increase increase capacity on wards for urgent admissions following guidance issued last week by the Scottish Government that boards should consider prioritizing all available space to critical and life-saving care.

The First Minister acknowledged that these “lengthens waiting times”, but said that the Government is now working to find extra elective capacity over the coming weeks on weekdays and at weekends at the NHS Golden Jubilee Hospital in Clydebank and at other health boards where patients affected by these delays could be sent instead in order to “minimise the knock-on pressure on waiting times”.

READ MORE: Excess deaths are among the highest in five years – so how much is down to A&E delays?

The focus will be on orthopedics, ophthalmology and general surgery, she added.

Ms Sturgeon also defended the decision to give health boards the “flexibility” to decide whether or not to pause non-urgent elective procedures in their regions.

She said: “No two health boards are exactly the same in terms of the make up of the areas they cover.

“If we were to step in right now and for example give an instruction for a nationwide pausing of non-urgent electives then arguably that would be going beyond what is required in some health boards and having disproportionate and unnecessary impact on patients.

“I think it is right and proper to allow health boards to make these decisions and for any health board that takes action like postponing non-urgent electives, the important point is that that should be for as short a period as possible.”

The CMO noted that flu incidence patterns currently vary by health board region from moderate to extraordinary, which impacts on bed availability.

Ms Sturgeon also welcomed the announcement on Friday by several health trade unions – the GMB, Royal College of Nursing, and Royal College of Midwives – that their members in Scotland were putting any immediate threat of strike action on hold following progress on NHS pay talks.

Ms Sturgeon said: “It is hard to overstate the importance of that. I don’t want NHS taff to feel they need to strike at any time, but the impact on patients – and indeed on staff in this period of acute pressure – would have been especially difficult.”