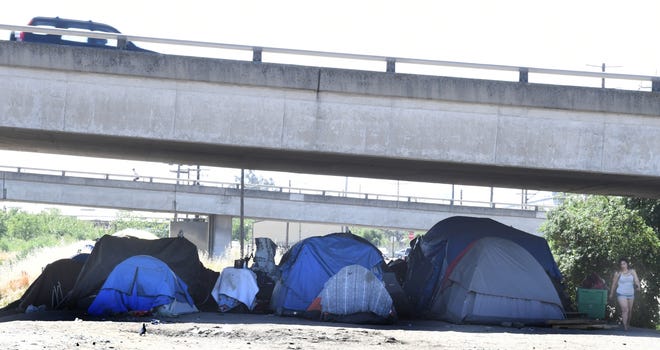 Stockton is one step closer to having a low-barrier shelter for the homeless.

Of the four applications received, the others being from the Gospel Center Rescue Mission, Uplift Foundation and Fresh Start Transitional Housing and Reentry Program, City of Stockton Economic Development Director Carrie Wright said Salvation Army’s proposal rose to the top.

The Salvation Army is in negotiations with the property owner, but the 10-year lease listed at the June 14 council meeting was $2.2 million. Councilmember Sol Jobrack said that number would likely be comparable to what it would cost to purchase the building.

During a Presentation on state Homeless Housing, Assistance and Prevention (HHAP) Program funding, Kayce Rane of Rane Community Development — a consultant helping the city with their homelessness planning and funding — showed councilmembers a graph picturing homelessness funding sharply declining over the next eight years.

Black advised the council that he does not believe that will be the case. HHAP funds were initially expected to be one-time funds, and the state is now in talks of a fourth round of funding.

“For me, based on the crisis nature of what we’re dealing with, I don’t see how you go back in reverse, I see having to continue to go forward. Even in governmental terms, I would continue to be optimistic,” Black said. “This is interesting in government, (the state has said) we want you to actually spend more money for HHAP round two and we’re going to give you more money.”

As a result, the council approved $1.3 million in ARPA contingency funds to be available to support any gap in operational funding for the first two years for the proposed low barrier shelter.

Stockton has 554 shelter beds, many of which have access requirements such youth-only, male-only, no pets or partners or being sober. The city hopes to pump up it’s 61% average shelter occupancy by adding 125 low-barrier beds — sobriety and other prerequisites are not required — and continuing to provide education on existing shelter options.

Record reporter Ben Irwin covers Stockton and San Joaquin County government. He can be reached at [email protected] or on Twitter @B1rwin. Support local news, subscribe to The Stockton Record at https://www.recordnet.com/subscribenow.