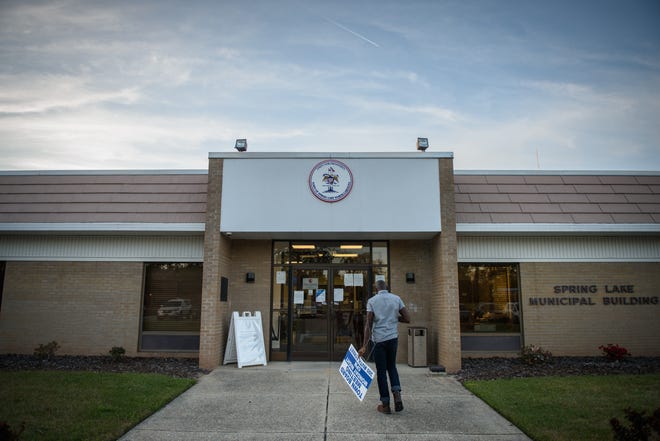 The Spring Lake Board of Alderman on Monday rejected creating a new invocation policy for the town, after months of discussions.

The board has been considering an invocation policy that would invite community members of all faiths, instead of board members, to say the prayer at the beginning of meetings. The board currently does not have a policy.

“This is not an attack on Christianity,” Mayor Kia Anthony said. “This is us protecting ourselves from any sort of litigation.”

Background information provided to board members at previous meetings included a highlighted excerpt from the University of North Carolina School of Government that stated that prayer during meetings “violates the Constitution” in certain situations. The statement said that based on a 2013 Circuit Court case, that situation occurs when only board members deliver the prayers, they are all of the same religion, they don’t present an opportunity for other faiths to be represented, and they provide the invocation during “the intimate setting of a local government meeting.”

As a result, the board on Monday received a new invocation policy from town staff, which stipulated:

Interim Town Manager Joe Durham said that the town staff created this policy based on other policies across the state. He also said that some boards have adopted policies, some have eliminated invocations completely and others have done nothing.

Alderwoman Sona Cooper said that this policy was not removing the invocation, which some members of the public had previously believed. “It actually opens it up to more people,” she said.

“This is a personal agenda,” James Christian said. “We should be focusing on finances.”

Later in the meeting, Anthony, who brought up the discussion about the invocation, denied that it was a personal agenda.

Fredricka Sutherland said that, in more than a decade of service to the town, she had never seen it be an issue. “We have more pressing issues that we need to deal with,” she said.

“I think that merely inviting the public to do the invocation in their forum is sufficient to cover and protect us (from litigation),” Alderman Raul Palacios said.

Jonathan Charleston, who has resigned as town attorney but agreed to stay with the town until it finds a new attorney, said that it was important for the town to be compliant with the law.

“I think we can do that without having the policy,” Palacios responded.

Alderman Marvin Lackman, who has previously vocalized his opposition to the policy, made a motion to reject the proposed policy.

“As an alderman, I came to serve the people. I came here to work and try to improve this town,” he said. “Let’s put this to bed once and for all.”

Palacios, Adrian Jones Thompson and Robyn Chadwick supported Lackman’s motion. Cooper voted against the motion. Anthony is not a voting member of the board and therefore did not participate.

Reporter Ivey Schofield can be reached at [email protected]