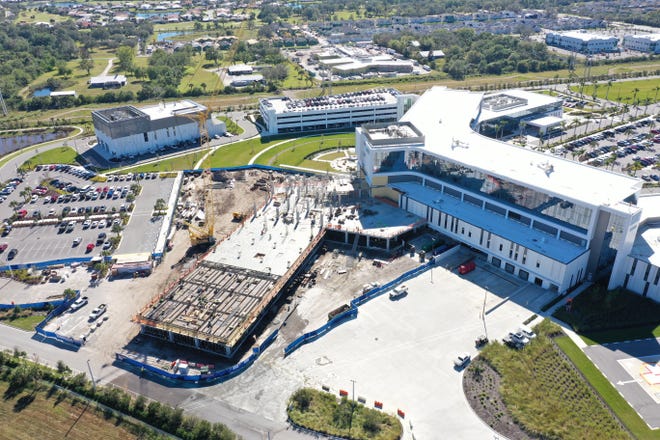 VENICE – In the 14 months since it opened, Sarasota Memorial Hospital Venice and its staff have been through the COVID-19 pandemic, Hurricane Ian and the unexpected closure of the 312-bed ShorePoint Venice hospital.

“Everybody can feel the strain of that right now because there aren’t enough beds right now to serve this community,” Roush said.

SMH-Venice, currently a 110-bed hospital, has been at or near capacity dating back to when it opened at the end of 2021, prompting social media posts bemoaning long waits in the Emergency Department.

“I’ve heard that the facility is terrific, the employees are terrific but the emergency room is overwhelmed since ShorePoint” closed, Tiger Bay Club member Marty Dover said. “If they had only been honest in the first place of what their plans were, we could have done a certificate of need for more beds so they really messed us up.

“How are you handling this emergency room fiasco?” she then asked.

Roush pointed to plans to increase the size of the Emergency Department from 28 to 50 and the number of surgical suites from 8 to 16. That expansion is projected to open in September 2024, while a new 102-bed patient tower is scheduled to open in April 2024.

Technically that new wing is only slated for 68 new beds. The Sarasota County Public Hospital Board will be asked to approve increasing that to 102 as soon as its March meeting.

But that’s still more than a year away.

For now, because of limited capacity, patients are being transported to the 901-bed Sarasota campus.

Roush said as soon as the hospital realized that the initial volume exceeded its plans, a pre-admission testing unit was converted to a fast-track emergency room, and additional doctors and staff members were hired.

“It’s not pretty right now as far as the Emergency Room goes from the standpoint that it is overwhelmed – and this is a situation that doesn’t exist just here, it’s a region wide issue – we work daily on efficiency and providing excellent care. ”

SMH planned ahead – for example the pharmacy, labs and energy center were designed to accommodate the 400-bed facility the hospital will someday become – but the decision by Community Health Systems Inc. to close its hospital in September was unexpected.

Sarasota Memorial is already planning on building a 100-bed hospital at the intersection of Interstate 75 and Sumter Boulevard, as well as a medical service campus on US 41 in the Wellen Park section of North Port.

The goal is to break ground in 2025, as part of the public hospital’s 100-year anniversary.

Related:Sarasota Memorial plans to start construction on new hospital in North Port by 2025

Roush offered few details about the North Port plans because she’s not directly involved but she said she has told Sarasota Memorial Health Care System President & CEO David Verinder that it should be easier because of the recent experience in building the Venice campus.

Roush said that SMH is still expanding the services available at the Venice campus. Certifications for hip and knee replacement are in the works, though specialties such as trauma and pediatrics are best served at larger facilities.

“Our goal at this campus is to live up to the same standards of care that SMH provides at the Sarasota campus,” Roush said. “There’s 100 years of history there; we are new.”