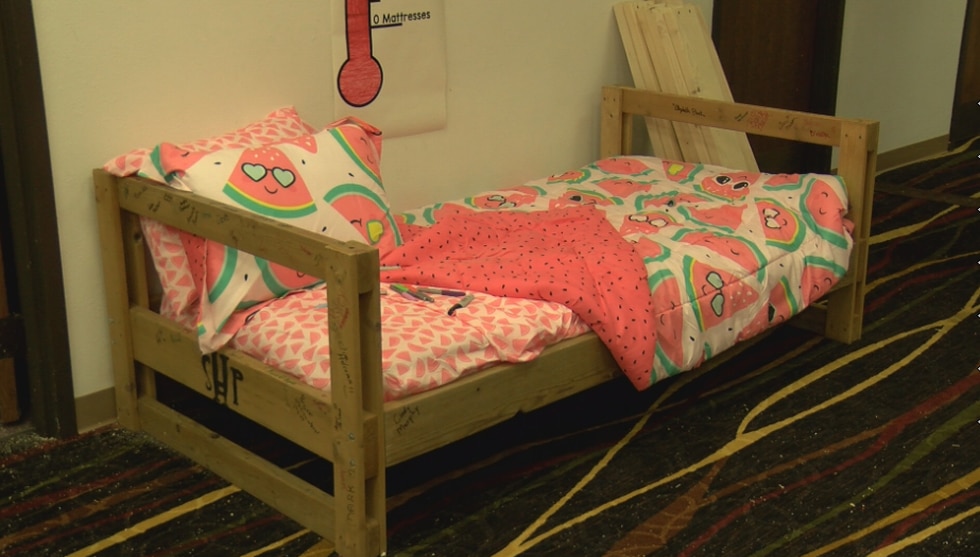 Planks of wood, and a whole team of determined volunteers is all the Sioux City Chapter of Sleep in Heavenly Peace needs.

A team of about 150 volunteers gathered on Saturday in the parking lot of Crossroads Church to build beds for children in need.

“It’s awesome. You know, you don’t need any money to come volunteer and show up and to put in some labor, a little bit of labor of love. And so today, as proof of that,” said Meredith Davies-Vogt, Chapter President.

The Sioux City Chapter started in December of 2021 and made 56 beds on December 11 to deliver to children before Christmas. Just two months later, the group has expanded to try to achieve a bigger goal, and to serve an even larger area with four new zip codes.

The organization’s motto is “No kid sleeps on the floor in our town.” For all the people lending a helping hand on this Saturday, the simple motto means so much more than just volunteering.

“I’m a mother to six kids, and I have two grandkids. And I can’t imagine any of them not having a bed to sleep on. And a lot of the people that volunteer here are teachers as well. They see the impact that that has. If a child doesn’t have a bed to sleep in, they don’t get a good night’s rest. And then they don’t get to school on time, or they go to sleep while they’re in school. So this is just more than just a bed,” said Mary Waldman, member of Sleep in Heavenly Peace core team.

Sanding, drilling, and branding is all it takes to have all of the pieces ready to deliver to children when the time comes. The smile on the children’s face when they receive a bed is all it takes to make it worthwhile for the volunteers.