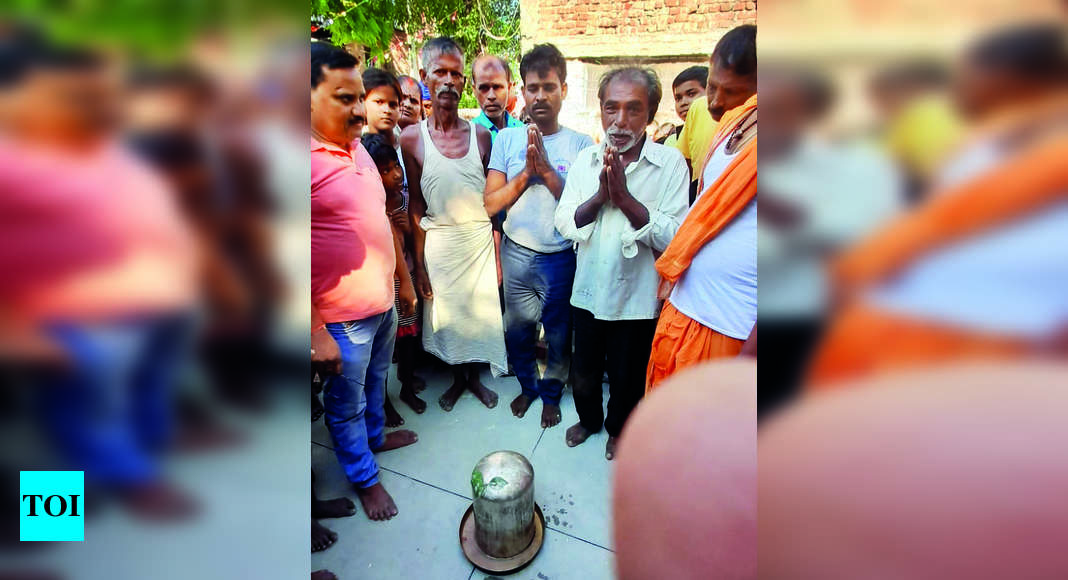 Varanasi: Since Saturday, Dohrighat police station of Mau district has become a crowd puller- not of complainants or protesters but devotees of Lord Shiva who have come here to get a glimpse of the silver Shivling which was found at the sand bed of river Ghaghra. The incident which happened coincidentally in the auspicious Shravan month, has become a talk of the town.
While Mau police are trying to solve the mystery as to how this shivling made of silver reached the Ghaghra sandbed, in another incident in Jaunpur, some laborers found a metallic pot containing gold coins during a construction work and left with the coins. Now, the police in Jaunpur are facing a hard time in recovering these gold coins from labourers.
SP Mau Avinash Pandey has already issued necessary directives to Dohrighat police for keeping Shivling in safe custody and to find out how it reached the sand bed of Ghaghra river. The SP also reached the Dohrighat police station on Sunday evening.
Talking to TOI he said, “Total weight of this Shivling is around 21 kg and it seems to be made of many other metals apart from silver. We are engaging experts to examine it. People have been appealed to provide information about the Shivling if they have any while police teams have also been engaged to find out about the Shivlig.”
The silver Shivling was found by a local Ram Milan Nishad when he was collecting mud to wash utensils for worshiping near a pillar of the bridge on river Ghaghra under Dohrighat police station on Saturday morning. On noticing some hard metal object, Nishad and his daughter started removing mud and found a silver Shivling there. On seeing it, locals gathered there in a huge number.
Nishad and his daughter took the Shivling to their place and after cleaning it they called local Lord Shiva temple temples priest Shyamji Pandey and reported the matter to the police. The Shivling was then taken to Dohrighat police station. With its arrival, people curious to see the Shivling started crowding the police station.
Meanwhile, in Jaunpur, the police of Machhlishehar police station are exercising hard to find out the exact number of gold coins recovered by the laborers from a metallic pot found during digging for constructing a new toilet at the residence of one Noorjahan in Kajiyana locality.
Inspector Machhlishehar Devanand Rajak said, “Ten gold coins have been recovered from the laborers so far and have been deposited in treasury. We are trying to fimd whether laborers had found more coins.”
The police investigation revealed that during the construction work of a toilet behind the house of one Noorjahan, a group of laborers led by Raja Babu found a metallic pot with gold coins on July 12. They divided the coins among them and left for their places. However, the Noorjahan’s family informed the police after which the police started interrogating the laborers who then confessed of having found the pot and coins.