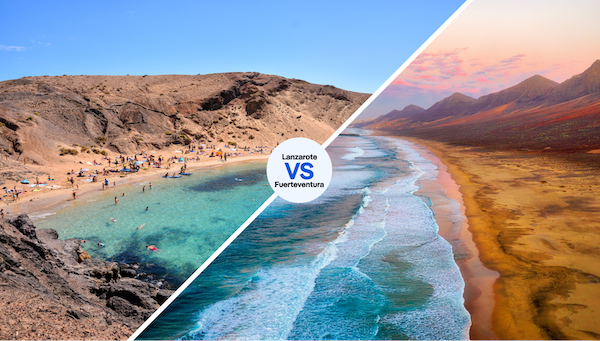 As the midwinter blues set in, low-cost flights to the Canary Islands beckon. Deciding to head for the airport is an easy choice; which island to pick is the hard part.

We’ve narrowed it down to Lanzarote and Fuerteventura – and are leaving the rest to two passionate experts, each of whom makes the case for her preferred getaway.

Discover the world’s most intriguing experiences with our weekly newsletter delivered straight to your inbox.

Travel journalist Isabella Noble grew up in Spain and now splits her time between Barcelona and Andalucía. Wildly beautiful Lanzarote has always been her favorite place in the Canary Islands.

A soulless sea and sun escape? think again For me, Lanzarote evokes everything that’s magical and surprising about the sunny Canaries, an island that overturns stereotypes at every corner but also has its own distinctive, irresistible energy.

Sure, Fuerteventura might be famous for its beaches, but Lanzarote has fabulous Famara – a wild, all-natural, golden-white beauty stretching 6km (3.75 miles) beneath cascading volcanic cliffs, and one of the greatest surf beaches in Europe. Then there are the sun-toasted Papagayo beaches in the south near Playa Blanca, part of a pristine nature reserve, where diving into the glittering Atlantic is your reward for thrilling hikes along the cliff-hugging trails. Or escape to wonderfully isolated Playa del Risco (reached by an hour-long hike) or remote, bewitching Isla Graciosa, also protected and accessible only by boat from northern Lanzarote. Like many lanzaroteñosI love the twinkling natural sea pools in Punta Mujeres for a dip, too.

Unlike many of Spain’s other islands, development on Lanzarote has been mostly kept to a minimum, and there’s only one skyscraper on the entire island. Dotted across the rugged volcanic landscape, the villages are whitewashed and have eye-catching traditional architecture of low-rise buildings with ocean-blue or forest-green shutters. Much of this is down to the pioneering work of the celebrated 20th century lanzaroteño artist and environmental campaigner César Manrique, whose spectacular, boundary-pushing works still take over lagoons, caves, lookouts and other spaces all over the island. Everyone here has their favorite; mine is the Jameos del Agua, a moody cave-lagoon ingeniously reimagined by Manrique in the 1960s as a cultural space. And there’s centuries of history to uncover, starting with the former capital Teguise, originally an Indigenous settlement.

Fancy something active? Lanzarote also happens to be a dream for hikers and cyclists – just ask the many professional athletes who flock here from all over the globe to train. Scrambling up volcanic calderas on the fringes of the otherworldly, lava-molded Timanfaya National Park is just the beginning, while the wide-open coastline is a delight for kayaking, paddle-boarding, diving, yoga and kitesurfing.

But there’s much more. Lanzarote’s up-and-coming food scene ranks among the most exciting in the Canaries, packed with fresh island ingredients, traditional recipes and a healthy splash of innovation. On every visit I squeeze in a meal at the inventive Cantina Teguise, the elegant El Risco, the classic Bodega de Santiago (in a gorgeous old country mansion), the rustic Casa de la Playa (for perfect grilled cheese with local jam), SeBE (for delicious rice) and La Santa’s Alma Tapas & +. And how about those glorious Lanzarote wines? Grown in circular vineyards in mineral-rich volcanic soils and with every grape picked by hand, they’re quickly making a name for themselves on Spain’s wine stage.

Thrown in with all of this is an understated creative scene rooted in ancient artisanal crafts. Try your hand at Lanzarote-style pottery with a local ceramicist, roam around the independent galleries and boutiques in Teguise and learn about the divine cheeses with an expert quesero (cheesemaker). You’ll feel the island’s soulful creativity in the ever-growing number of outstanding, independent original-design hotels too, from La Geria haven Buenavista Lanzarote to sustainability-driven Finca de Arrieta in the north to Costa Teguise’s chic Álava Suites – all inspired by the bold volcanic landscapes and rich artistic heritage.

This is just a taste of why I escape to Lanzarote almost every year. Tempted yet?

All the feels for Fuerteventura

Helen Ochyra is a London-based travel writer who specializes in writing about Spain, especially the Canary Islands. Fuerteventura was the first of the Canaries she ever visited, and she has treasured memories of holidays there from her childhood as well as from returning with her own children.

When it came to choosing where to take my first child on her first vacation, it was a no-brainer: Fuerteventura.

The Canary Islands are all fabulous – there’s a reason why I’ve long specialized in writing about them – but there’s something special about Fuerteventura. Something that kept me dreaming of it in those first months of parenthood. Something that epitomizes escape.

It could be the beaches. Even Canarios from the other islands tend to agree that Fuerteventura has the best, and there are certainly plenty to wiggle your toes into. In the far south, Parque Natural de Jandia is an ocher and blond desertscape that feels like an exercise in sand art, its mountains and dunes crumbling down towards the sea and flattening out into mile upon mile of golden, Atlantic-washed playa. I like Morro Jable for its soft, white sands and a swim in waters the color of a blue raspberry ice pop, but also love to take the dirt road to Playa de Cofete, a wild strand ripe for a sandy-toed romp.

My favorite beach, though, has to be the Grandes Playas de Corralejo. Quite literally called the “big beaches,” these vast swathes of sand are protected as the Parque Natural de Corralejo and remain utterly pristine. Getting away from it all is easy-breezy here: just park, then run down the dunes, kicking up sand as you whoop your way towards the ocean. You can’t fail to gambol here; I can never seem to wipe the smile off my face.

Of course, there’s hiking aplenty on Fuerteventura too. Well-marked trails run across the island, spaghetti-like sinews that pass between volcanoes and lead to ancient craters and otherworldly lava formations. La Oliva, in the north, is the ideal jumping-off point for walks that loop through spectacular scenery, and I always make time to stop in teeny Lajares, an inland village that’s inexplicably beloved by the surf crowd, with its line-up of excellent cake shops and hip cafe bars.

Speaking of surfing, the island’s constant trade winds make for dependable waves, and there are surf beaches dotted along the northern coastline. A dirt-and-sand road runs from the resort town of Corralejo to the fishing village of El Cotillo, passing remote coves ripe for wave-riding, while in Corralejo itself numerous surf schools stood ready to get you out there whatever your level of experience .

Corralejo is also my favorite base on the island. Although a tourist resort, it has a real-town feel. I’ve seen local school children enjoying a phys-ed lesson on the quayside and long-time residents gesturing over morning coffee at teeny kiosk bars. I always grab a table on the waterside terrace at El Anzuelo, order the catch of the day and linger as I take it all in.

Back to those dreams of mine, though. They tend to take me to El Cotillo and a table above the harbor at La Vaca Azul. A local cheer fish, freshly blackened from the grill, is being filleted in front of me; a bottle of flinty malvasia volcanoca white wine from neighboring Lanzarote stands table-side in a cooler. Warm sunshine makes my shoulders drop as the sound of the sea slows my breathing. This, for me, is the joy of Fuerteventura. A true escape. A no brainer.