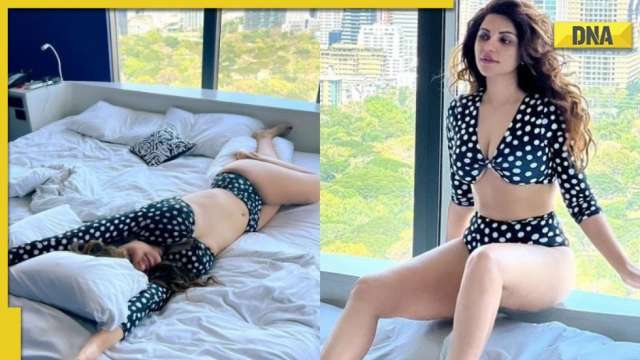 ‘Sexaholic’ fame Shama Sikander is popular aming her fans for posting steamy photos and videos on Instagram. Shama keeps on sharing her bikini-clad photos and sizzling videos on social media and she recently grabbed the attention of netizens after sharing hot pictures in a polka dot black and white bikini. The pictures are from Shama’s Bangkok vacation and they are now going viral. But, Shama Sikander also got trolled from some netizens for posting such bold photos.

In one of the photos shared by the Yeh Meri Life Hai actress, she can be seen lying on a bed wearing a bikini. Shama captioned the photo, “Lazing around cozzzzx its Sundayyyyy.” The hot photo which has been loved by Shama’s fans but some social media users brutally trolled her. One user commented, “Wahiyat aurat, sirf attention chahiye isko.” Another wrote, “cheap.”

Earlier also Shama had shared some photos from her Thailand vacation wearing a bikini. Alongside them she wrote, “So Missing my Bed, waking up to this beautiful view of Lumphini Park, the comfort and beauty of being in Earth Element, thank you @sobangkok for amazing hospitality. Thank you my darling So Mat @matchuladul for taking such awesome care about small little details for our stay. Love love love to you. big hugs.”

Meanwhile, Shama Sikander made her Bollywood debut with Aamir Khan in Mann. In the film, Shama has played a cameo role of Kamini. Shama later shifted to TV and became a popular face by acting in TV series Yeh Meri Life Hai. She has also acted in a short film titled Sexaholic.