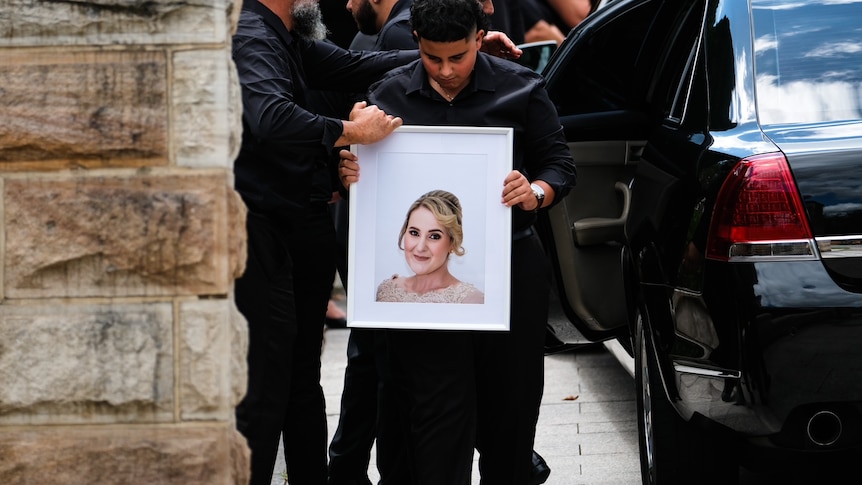 “A beautiful rose”: That is how Gold Coast helicopter crash victim Vanessa Tadros is being remembered by her husband at her funeral held in Sydney’s west.

As hundreds of mourners packed the Mount Druitt church in Sydney this morning, the absence of one individual loomed large — her 10-year-old son, Nicholas Tadros, who remains in hospital in Queensland, where he has been fighting for his life.

Ms Tadros is one of four people who were killed in a horror crash between two helicopters near Sea World on January 2.

The service — held at St John the Beloved Church in Mount Druitt in Sydney’s west — heard prayers in English and Arabic.

As the coffin, covered in cream-colored flowers, entered the church, the sound of grief-stricken mourners filled the street.

Husband and father Simon Tadros told the service he met his wife 16 years ago and “instantly felt the love she gives off”.

“She was the type of person who put other people first. She would do anything to make people smile,” he said to the gathering.

“She was a protector. Regardless of the consequences, she wanted to know that you were happy and you were safe.

“She’s resting in peace and she’s in a better place than we are now … I will always love you, no matter what,” he said in closing.

Mr Tadros wept with his head in his lap as the priest delivered his sermon.

“Simon, we are one with you,” Father Youssef Elias told the church, speaking directly to Vanessa’s husband.

“Twelve years ago from this very holy altar… you made a commitment to Vanessa that you would stand the rest of your days in faithfulness and love. These are your precious memories that you carry in your heart.”

The service — which was so packed that many were required to stand throughout — then cast its mind to Vanessa’s son, Nicholas.

“Nicholas, you are the pride and the joy of your Mum and Dad,” Father Youssef Elias added.

“Your mother’s love has never left you and will never leave you. May you become completely healed.”

Yesterday, Nicholas’ father said on social media that his son had “responded very well” but was “still on the ventilator machine to support his breathing” after being taken off life support several days ago.

“[There is] still no movement in his legs but [we] have been advised that could be due to the broken bones in both his legs,” Mr Tadros wrote in a statement yesterday.

He told mourners he would leave the service and immediately return to Queensland to be with Nicholas.