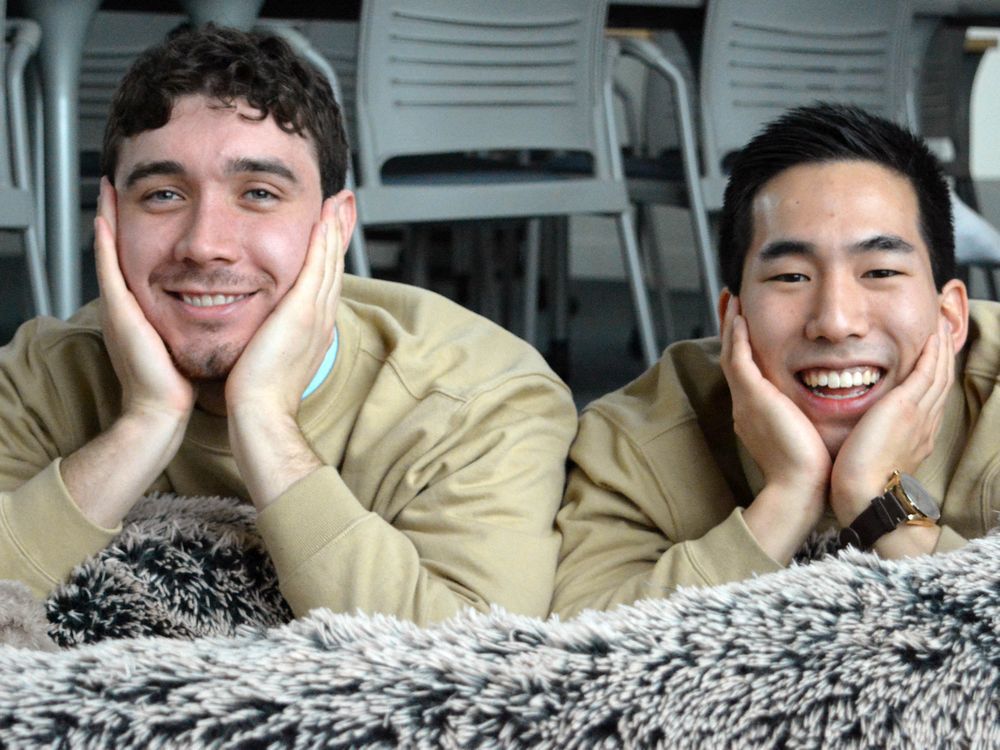 University of British Columbia entrepreneurs Noah Silverman and Yuki Kinoshita want to normalize napping during the work day with their cozy floor bed called a Plufl.

For University of BC entrepreneurs Noah Silverman and Yuki Kinoshita anything is paw-sible.

The two bachelor of international economics graduates are co-founders of Plufl, a company that makes human-sized dog beds, which Silverman says have been designed with the ultimate “snuggle factor.”

Since launching their company in March, Plufl has raised more than $250,000 on Kickstarter. Both said they have been amazed by the response, which has included calls from people in countries around the world.

Silverman and Kinoshita, both in their early 20s, said they hope their floor beds will normalize the idea of ​​taking a nap during the work or study day to optimize health and well-being.

Some companies in California’s Silicone Valley, for example, have nap rooms for employees to relax for a few minutes before getting back to work, said Silverman. He added that napping reduces stress and anxiety, and can lead to a more productive work day.

“Yuki and I have always been pretty big nappers. You know, being university students,” said Silverman. “With full-time classes and extracurriculars it’s hard to get a full night’s sleep.”

Then in 2020, when Silverman was working in a coffee shop on campus, he saw that the owners had a giant dog bed that was custom made for their Great Dane. He thought the bed looked cozy enough for him to just curl up in and take a nap.

“I was like, ‘Wow, why can’t there be a human dog bed?’ And I went to Yuki, and we were both like, ‘Wow, it’s pretty crazy that there is no dog bed for humans,’ ” said Silverman.

Kinoshita said the Plufl is great for offices or even for people who work from home, who don’t want to interrupt their work flow by going for a 15-minute nap in bed, where they usually sleep for seven or eight hours.

“One of our missions is to really help people reduce anxiety,” said Kinoshita. “Workplace exhaustion is a big challenge right now and a lot of workplaces are implementing napping as part of their workday but it’s slow to catch on.”

The pair brought in a designer with a background in textiles to ensure that the Plufl was made for human comfort, said Silverman, with an orthopedic foam base and a large oval shape. Then, they use those “snuggle factor” materials like faux fur. It also has a pillow border and pockets where you can tuck hands and feet. The faux fur cover can be removed and washed.

Silverman, who made the health benefits of napping part of his study at UBC, said research shows that there are benefits to rest even if a person doesn’t fall asleep but just closes their eyes, and they detach from the world and their work.

“Whether you’re sleeping or not, it’s really about taking a step away from your work in your life and just resting for 20 to 30 minutes throughout the day,” said Silverman.

Those who are interested in owning a Plufl can pre-order them on the Kickstarter page. While the pair work to fill an order of more than 800 beds, they are also coming up with ideas to go along with the product, such as pillows and blankets.

More news, fewer ads: Our in-depth journalism is possible thanks to the support of our subscribers. For just $3.50 per week, you can get unlimited, ad-lite access to The Vancouver Sun, The Province, National Post and 13 other Canadian news sites. Support us by subscribing today: The Vancouver Sun | The Province.