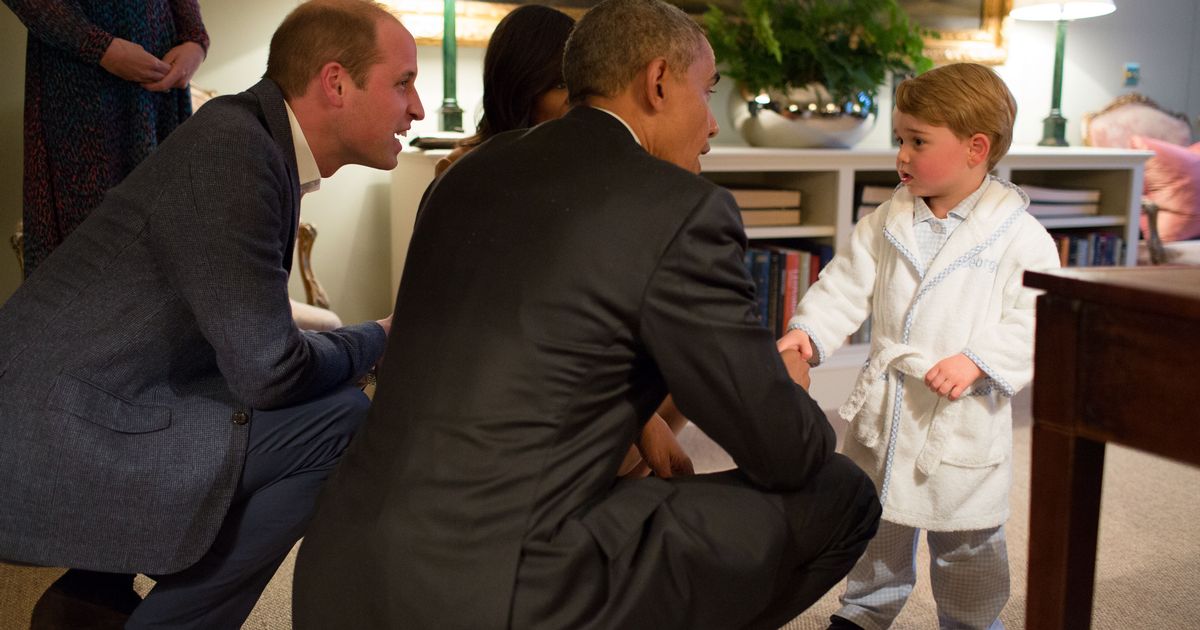 Forgotten photos have resurfaced showing Prince George staying up past his bedtime to meet the Obamas. Prince George met Barack and Michelle Obama back in 2016 at Kensington Palace, London. The photos were taken of Prince George who met the couple along with his mum and dad, The Duke and Duchess of Cambridge.

In the cute pictures Prince George is wearing a white dressing gown when he met the Obama’s on April 22, six years ago. The young Prince was allowed to stay up later than usual to meet the Obamas, and spent about 15 minutes with them. Photographs were given to the media from inside Kensington Palace at the time.

Princess Charlotte was in bed so it was only the lucky Prince, born in 2013, who got to share time with the former President. It turns out that Prince George was actually given a gift by Barack and Michelle Obama. The Prince was gifted a rocking horse when he was born which he played on during the meeting, three years later.

After meeting George in his dressing gown, Barack Obama clearly saw the funny side. He later joked: “Even some foreign leaders, they have been looking ahead, anticipating my departure. Last week Prince George showed up to our meeting in his bathrobe. That was a slap in the face. A clear breach of protocol.”

The former US president and First Lady stopped by the royal residence, on the edge of Hyde Park in West London, to wish the Queen a happy 90th birthday, and to meet Prince Harry and The Duke and Duchess of Cambridge.

During the time as President and First Lady, the Obamas grew close to the younger royals, establishing a warm relationship with both Harry and William. When George and Charlotte were born, the US couple were one of the first to send gifts – a rocking horse and toy dog.

Want more from MyLondon? Sign up to our daily newsletters for all the latest and g reams from across London here.

Do you want to stay up to date with the latest news, views, features and opinion from across the city?

MyLondon’s brilliant newsletter The 12 is absolutely jam packed with all the latest to keep you entertained, informed and uplifted.

You’ll get 12 stories straight to your inbox at around 12pm. It’s the perfect lunchtime read.

The MyLondon team tells London stories for Londoners. Our journalists cover all the news you need – from City Hall to your local streets, so you’ll never miss a moment.

Don’t skip a beat and sign up to The 12 newsletter here.