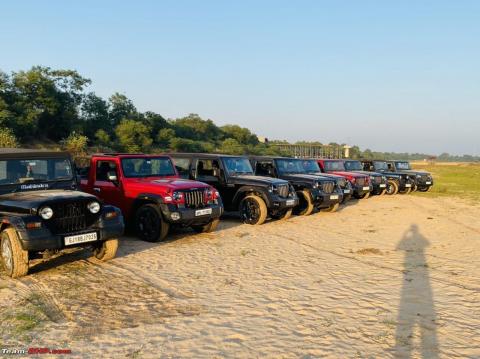 All water crossings were carried out by engaging 4L and 2nd gear with minimal throttle response.

Our guys from the TCOG (Thar Club of Gujarat) had an entertaining OTR session on the river bed of the Vatrak. Slowly and gradually the group grows with more and more people joining to explore the less-chosen path. The package ranged from all kinds of Thar 2020 variants, from gasoline AT to diesel manual with convertible top, we all had beauties. Even the pair of CRDe were two different ones, a 2018 black Thar CRDe and my 2019 Thar CRDe 700 Edition.

We have been to famous OTR locations like Ambod and Amrapur many times, so this time we thought of choosing a less selected location. After browsing Google Maps a bit here and there, we completed a location on the banks of the Vatrak river bed near Kheda. This place was about 50 km from Ahmedabad.

This was a complete river bed trip with many water wading sections, hence, strictly speaking, a 4L area.

Due to the convenience of the maximum number of participants, we decided to gather after lunch, i.e. around 2:00 pm from Ahmedabad, we gathered at the Bopal intersection near the IOCL gas station.

At 2:30 pm we started our journey to this unknown destination, it was pretty clear that this place was going to be either a downer or a fun place to be. We drove convoy style along the SP ring road and then onto the old NH48 Ahmedabad-Vadodara highway. After about an hour of driving, we came to a point where the river ran parallel, but we could not retrace the path to the river bed.

A couple of us got out and asked the locals, they suggested taking a Kaccha street next to the railway bridge under construction to the river bed. It was a dust explosion by the time we got to the bank of the river. Any normal person would have thought that going further into the river was almost impossible, but when you have different types of itching to try new things, no path seems impossible. BHPian Khalil_Khan the most passionate and dedicated of us went into the river to check the depth and surface below. This required a steep incline in 4L 1st gear and then driving into the river and across the river bank. One point of observation is that we tried to slow down with a couple of thars in 4H 1st gear with Hill Launch Assist on, but it still didn’t have the control you get in 4L 1st gear.

While Khalil did the spotter work halfway in knee-deep water, I and a few others led the drivers to the starting points.

When all 8 Thars started on their way, it was my turn to take the same route and to go to the other side of the river bank. At that moment Khalil told me to try another route into the river, which was a steep descent with swampy sand and even the water depth was a bit deep. Anyway, I went the other way, Khalil as an experienced off-roader did the spotters’ job pretty well, what happened next can be seen pretty clearly in the video in the next post. We followed the same pattern as with the first obstacle, one by one we went in and came out again without a fuss.

At that time, many locals and villagers crowded into this place with amusement, few of them came up to us and asked, “Is there some kind of vehicle test?” We said, “Yes, these are Mahindra vehicles that are being tested” to troubleshoot problems avoid using them. Then after a while someone else came up and asked: “What film is this?” This time we got the idea to ride 4-5 Thars in the water at the same time. While no water entered both CRDs, it did so in Thar 2020, but in some of them. The Thar 2020 gets drain plugs on the bottom board, open them and the water drains off. Good thought I have to say. When the third river crossing was clear, we stood up and chatted for a while on the river bank. As the sun set it was time to walk along the river bank and then drive back the same path we took the first time we crossed the river.

The steep incline required 4 liters in first gear to climb, although few of us had difficulty climbing, we all made out the sunset in the background.

All water crossings were carried out by engaging 4L and 2nd gear with minimal throttle response. Any 4X4 vehicle just crawls in 4L with no gas input and the best part about it, on a river obstacle you can easily slide over it without the fear of getting stuck. 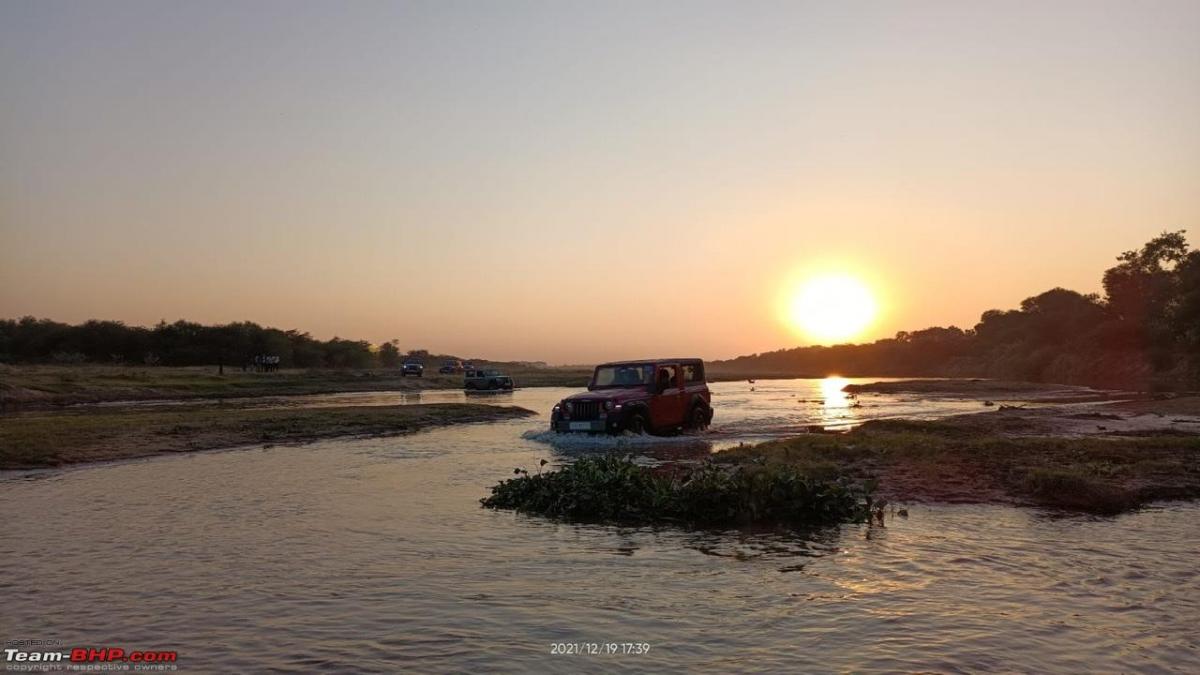 When we got back on the main road we decided to stop by for tea and some refreshment, it was post 6 in the evening and it was getting dark as we had the much needed tea on the side of the road with some snacks.

At 7:00 p.m. we paid off at the tea point and made our way back home. It took us about 1.5 hours to drive back via the old Ahmedabad-Vadodara national road (NH48). Our close friend Varun runs a YouTube channel called Thar Story and this is the video that was posted on the Offroad Tag’s channel.

Check out BHPian’s comments for more insight and information.