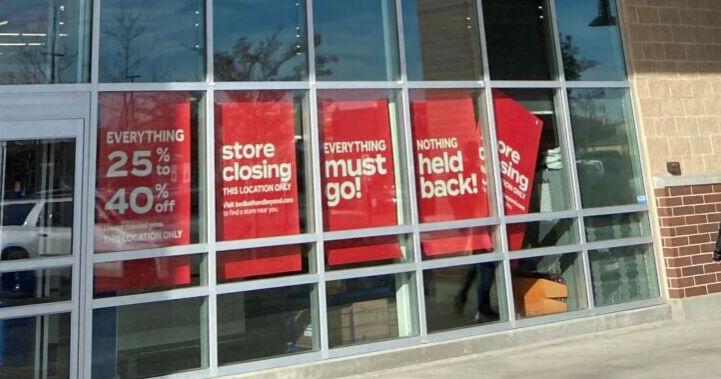 Holiday shoppers found less-than-festive signage at Bed Bath & Beyond in Twin Falls: The store is going out of business.

The struggling home goods chain, which in August announced that it would be closing about 150 “low-producing” locations and in September publicly identified the first 56 impacted stores, has added Twin Falls to the chopping block, Bed Bath & Beyond confirmed to the Times News on Tuesday.

“As part of our previously announced closing of approximately 150 underperforming stores in support of our current optimization strategy, Bed Bath & Beyond has decided to close the Twin Falls, Idaho, location in the coming months,” the company said in an email. “We previously shared this information with our valued Associates.”

There is no timetable for the store’s final day. A liquidation sale “will commence and continue over the next few months,” Bed Bath & Beyond told the Times News, with merchandise now priced at 25 to 40%, according to red signs displayed in the front windows. All sales are final. No coupons will be accepted, including the retailer’s always-popular 20% discounts.

“Everything must go!” one of the signs reads.

The shuttering of the Twin Falls store, located on Fillmore Street in the same shopping center as Dick’s Sporting Goods, Old Navy, Ulta Beauty, Ross Dress For Less and Petco, is the second loss in Idaho this year. The Pocatello location closed during the retailer’s first wave of 2022 nationwide cuts in January and February.

The closing of the Twin Falls store will leave five Bed Bath & Beyond locations in the Gem State, according to the retailer’s website: Boise, Coeur d’Alene, Idaho Falls, Meridian and Moscow. The company said it doesn’t plan additional Idaho closures “at this time.”

In his email, Bed Bath & Beyond said it “looks forward to serving area customers at nearby stores” in Boise and Meridian, “as well as online at bedbathandbeyond.com and our mobile app.”

The closings announced in August initially impacted 21 states and Puerto Rico — including eight stores in California, six in Illinois and five in Michigan and New York. The list of 37 closures to start the year included stores in 19 states.

“We are embracing a straight-forward, back-to-basics philosophy that focuses on better serving our customers, driving growth, and delivering business returns,” Bed Bath & Beyond interim CEO Sue Gove said in an August news release about the retailer’s future , adding that the company intends to be the “retailer of choice” in the home and baby markets.

“We are working swiftly and diligently to strengthen our liquidity and secure our path for the future,” Gove said.

The business news you need

Get the latest local business news delivered FREE to your inbox weekly.