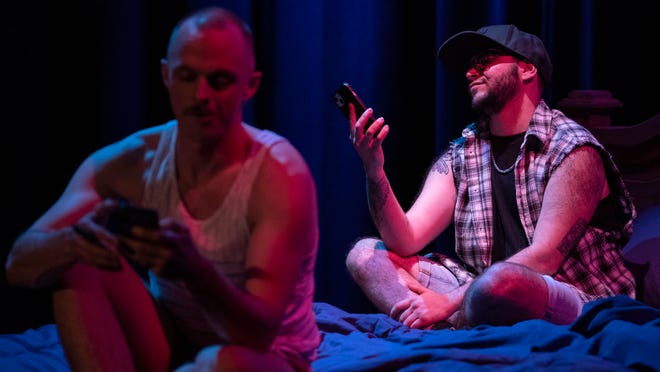 With a cast of only four people, a new production at the District Theater on Massachusetts Avenue is an intimate look at today’s queer culture and romance.

“Bed Play” features the issues in the queer community that playwright Shar Steiman has observed through friends and lovers, including sex and love.

Centered around one major prop — a bed — the play chronicles the lives of its four queer characters as they navigate the modern-day queer landscape, including online hook-ups, monogamy and gender identity and transition.

“It’s not just this raunchy, sexual, tongue-in-cheek thing,” Steiman said. “It has the humanizing, real, true elements to it, as well.”

It’s almost time:Here are all the new foods to try at the 2022 Indiana State Fair

The production marks the fifth play Steiman has collaborated with co-producer and director Ty Stover. The two met when Steiman was a freshman in high school and Stover was his theater teacher.

Stover said upon reading a monologue Steiman wrote for the class, he knew he was a talented writer. He said each play Steiman writes is completely unique from the one before, noting that even as a teenager, he was able to identify with adult themes and concepts in his work.

Such elements, like sex and gender, have been present in some form in much of Steiman’s work, but in “Bed Play,” those themes take center stage.

‘Hamilton’ wants to return to Indianapolis: Here’s the full 2022-23 season of Broadway shows

“’Bed Play’ is a romantic and raunchy love letter to queer culture,” Steiman said. “It conveys the pleasures and pains of modern queer love, elevated by poetry.”

The importance of queer representation

“Oftentimes, we see the pains … or it’s centered around that person being queer and that’s their struggle,” Steiman said, “whereas this dives deeper into that and shows what it’s really like to just be queer and live your life.”

Steiman wrote it in an effort to portray authentic queer and transgender representation as he would have liked to see as a young, queer teen.

Everyone involved with the play is queer, and in casting the four roles, Steiman said it was important to intentionally cast the correct gender representation for each character as they were written, thus creating a synergy between the entire cast.

The cast list is composed of a transgender man, a transgender woman, a non-binary person and another person whose pronouns are he/they, each linking to their respective character. Through the play, their characters explore both their sexual and gender identity.

“You say you’re proud about the work you do, but there are elements about this thing, even to the point of personal growth stuff,” Stover said. “They are really connecting with this material like no other.”

Evolution of Pride fashion: From hand-me-downs to glamorous gowns

From the bed to the stage

One casting challenge pertained to casting the role of a transgender male character. Ultimately, Steiman stepped up and took the part himself, marking “Bed Play” the first of his productions in which he also performs.

“I have all this stuff in my head,” Steiman said. “So, getting to get up on stage and actually act it out, it’s really cathartic on another level than just sitting in the room and watching.”

With its inclusive cast and subject matter, the play seeks to educate those who are allies or want to learn more about transgender, nonbinary or queer people.

“This play is not alienating in any way,” Steiman said. “If you’re open and you’re curious, I think it’s for anyone that wants to see queer representation. … It’s both comical and real.”

The play’s program includes a glossary of terms that are widely used in the queer community so those who are unfamiliar can better understand the topics.

Stover said he hopes viewers come to the greater understanding that transgender people are just people, with the same feelings, dreams and love as cisgender people.

Pauline Moffat, the general manager of the District Theatre, has known Steiman for nearly 10 years and said she considers the play a learning experience.

Moffat co-founded the Indy Fringe Festival, which showcased four of Steiman’s plays over four years when he was in high school. Moffat said “Bed Play” opened her eyes and showed her another world after its opening night.

“I loved it,” Moffat said. “I was so proud of Shar and the fact that that young man, 10 years later, could write something that really touched an audience.”

“Bed Play” is showing July 8-10 at the District Theater, 627 Massachusetts Avenue. Tickets are $15 for students and seniors and $20 for adults. To view showtimes and buy tickets, visit indydistricttheatre.org.

You can reach Pulliam Fellow Griffin Wiles at [email protected] or on Twitter at @griffinwiles.